US cannot lead world if trapped by its own democratic mess

The Copenhagen Democracy Summit 2021 is scheduled for Monday and Tuesday. The summit comes as US President Joe Biden "prepares a global summit for democracy later this year," reads the official website of the Alliance of Democracies Foundation, a Denmark-based nonprofit organization, which is the organizer of the Copenhagen summit. 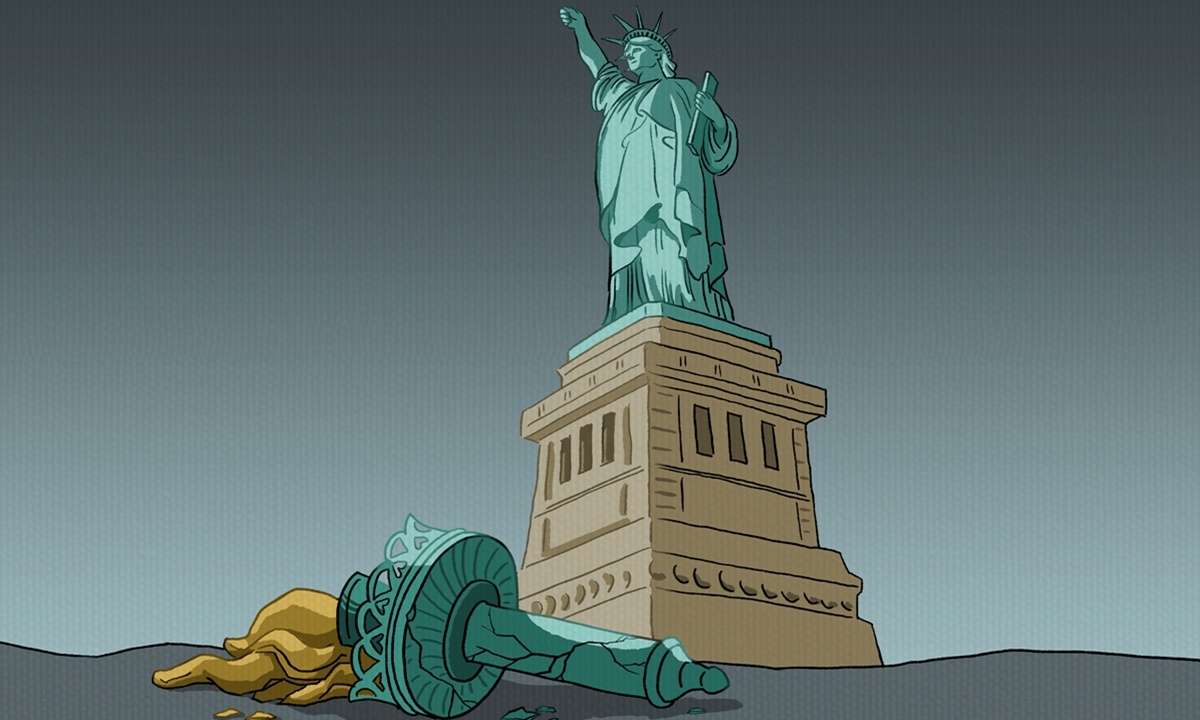 Some US media outlets mistakenly see the meeting as the "global summit for democracy," which Biden pledged to organize and host since his presidential campaign. Yet they are right on one thing when voicing their concerns about whether the US can play the role as a global leader of democracy in the post-Trump era, whether the US is still in a position to chart the course and impose it on others, because the US "has bigger and deep rooted problems at home than an impulse to lecturing the world on democracy," commented the New York and New Jersey Business Journal.

Observers have sufficient reason to be concerned. Washington has been promoting the global democracy summit, and more, building a global democratic alliance, yet the US own democratic system is not functioning well at all. For the US and many other Western countries, democracy has descended to mainly a political card for international intervention.

They have been utilizing the Western democratic model featuring electoral system and multi-party system as the sole criteria to classify different countries, dividing them into two camps: democracy and "autocracy." They believe they are standing on the moral high ground with reasonable excuses to point fingers at China, Russia and other countries, interfering in their domestic affairs.

Unfortunately, what the world has witnessed over the past few years is the exposure of the shortcomings and problems left unanswered of US democratic system. This trump card of the US has many stains on it.

Take the two-party system. It has developed to a status where one party opposes whatever the other one does or promotes regardless of right or wrong. As a result, no consensus can be reached easily to resolve US home affairs. Issues such as gun control and racial discrimination have turned into chronic social illness with no solutions for decades or even longer. Worse, when the Donald Trump administration hyped populism and incited racial hatred on US soil, many Republicans knew it was not right. Yet they still supported Trump for political self-interest.

Under the US democratic system, many problems can hardly be resolved because of the ferocious political infighting and the polarization of politics. Policies of one administration can be changed as soon as the next one steps into office. Washington's domestic governance is getting increasingly problematic.

Democracy has a wide range of parameters, involving numerous elements. But its foremost and ultimate goal should be providing good governance to its own people. Worse, domestic problems of the US are not easy to be fixed. It would require a broad, deep and solid consensus of the whole country. However, the US does not have such condition for the moment. The country is simply too divided.

Many analysts, including some from the US, are aware of this. But the ruling administration seems like it is not. They continue to meddle with other countries by sanctions or even military forces in the name of "promoting democracy." Nevertheless, the countries in the world are becoming more cautious of the narrative. If the US keeps failing to set an example in terms of ensuring its own people's happiness, personal security, social equality, fairness and justice, it will find it less and less effective to continue playing the democratic card. If a country's development deteriorates every day with ordinary people's living standards worsening, would they still put "democracy" on top of their wishing list?

Hosting some summits or issuing some statements alone won't help tackle US own problems. Nor will the summits make the rest of the world willingly follow the US lead. If Washington does not realize good governance itself, it will eventually become less appealing or attractive. A growing number of countries will rethink if it is worth it to follow the US model. They will question whether or not they can achieve the goal of good governance, economic prosperity, and social equality on the so-called path of Washington.

Be it the Copenhagen Democracy Summit or Biden's global summit for democracy, these summits will be held. Yet US allies will no longer be hell-bent on supporting the US to confront China. Nor will they charge forward to make frontal attacks under US appeals.

Without healing the wounds of its own system, Washington's global leadership will eventually be jeopardized.

The author is deputy director of the Center for American Studies at Fudan University.