OPINIONS US, China need to continue to 'play ping pong' with each other: expert

US, China need to continue to 'play ping pong' with each other: expert 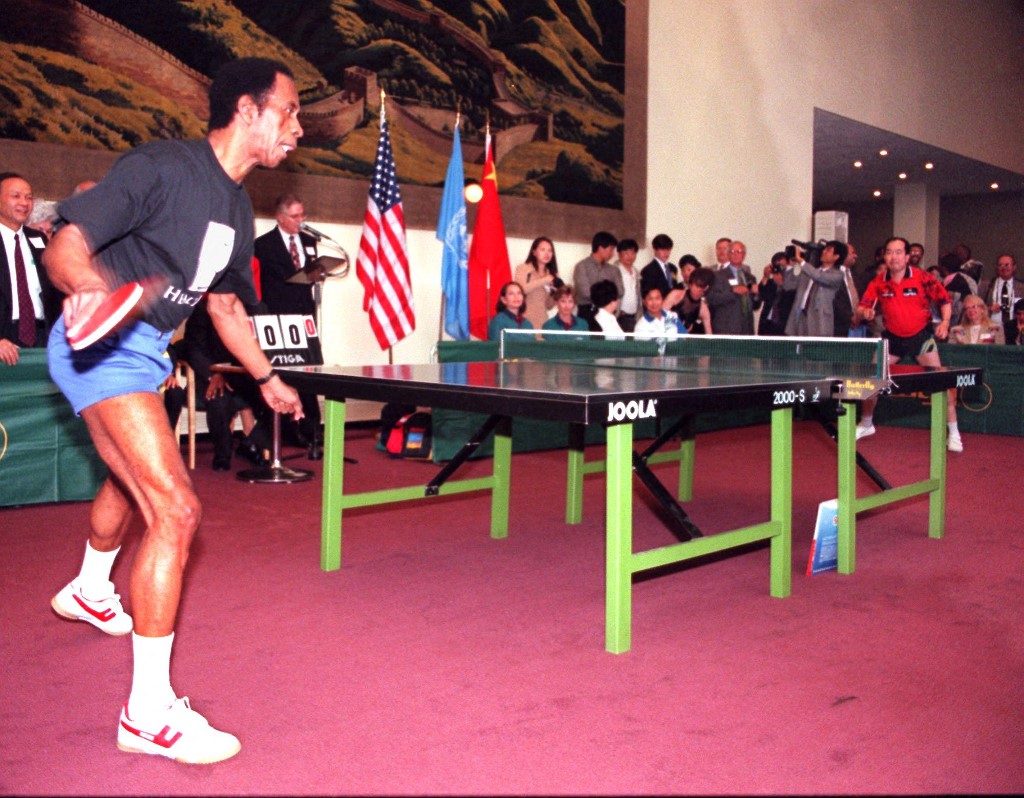 American George Brathwaite (L) returns a shot to China's Liang Geliang (R) 24 July at the United Nations in New York during an exhibition match celebrating the 25th anniversary of "Ping Pong Diplomacy," which marked the beginning of a US-China dialogue initiated by the Nixon administration in 1971 and 1972. The event was celebrated by the National Committee on U.S.-China Relations with a ping pong exhibition featuring players from the 1972 teams at the United Nations. (Photo: AFP)

WASHINGTON, April 9 (Xinhua) -- The United States and China need to continue to "play ping pong" with each other and invest more in the foundation of their consequential bilateral relationship, a leading U.S. expert on China has said.

Talking about the "Ping-Pong Diplomacy" that helped break the ice between China and the United States, and referring to it as "one of the powerful breakthroughs in the early 1970s," Daniel B. Wright, founder, president and CEO of GreenPoint Group said in a recent interview with Xinhua that both sides have benefited from "that vision as a way to pierce through the wall by playing ping pong together."

"Most importantly, we need to continue to play ping pong with each other. I'd like to emphasize that point," he said.

"I certainly recognize that if we talk about our bilateral relationship, this is no longer the 1970s. We don't have this third-party strategic threat called the Soviet Union and the strategic rationale of that time," said Wright, who served at the U.S. Treasury Department as managing director for China, and the Strategic Economic Dialogue, where he provided strategic counsel to then Secretary of the Treasury Henry M. Paulson, Jr.

"I clearly understand we have significant differences in trade, in national security at this current time. But I still believe there's space for the people of our two great nations to be coming together, to play ping pong together ... to do all the things you know, that I've done over the last 40 years," he said.

Wright served from 2000 to 2004 as the executive director of the Hopkins-Nanjing Center of Johns Hopkins University's School of Advanced International Studies, a premier educational joint-venture program between the United States and China.

From 1997 to 1999, he held a fellowship with the Institute of Current World Affairs, during which he lived in southwest China's Guizhou Province.

Wright speaks frequently on China and has published two books on China.

"There are so many important reasons on why we need to continue to protect this space of people-to-people relations. I call those areas of exchange strategic oases, which are important even when, especially when, there are different challenges. We are at a challenging inflection point in our bilateral relationship, we need to invest more in the foundation of the relationship, which actually is our people," said Wright.

"Because as we see, it's easy to pull back because there is a lot of fear around the world and within our societies. And there's a lot of fear in the bilateral (ties), but we actually need to lean in more, not less, and to be smart and creative in how we do that," he said.

"This is where leadership is important on both sides to make sure we're protecting that space for education exchange, for sports exchange, for business exchange -- for the flow of people and ideas," he said.

The expert pointed out that he is "cautiously optimistic" that the relationship of the two leaderships will help it get to that point over time, but is also "very clear-eyed that there are many challenges right now."

"As I mentioned, if we can accept that openness is a key to each of our successes domestically, then let's not worry quite so much about the world, about bilateral relations, about media. If we believe that openness is fundamentally important to the success of our societies, then we need to figure out how, what that looks like both domestically and internationally," said Wright.

The U.S. table tennis team visited China on April 10, 1971. Just one year later, a group of global ping-pong champions from China paid a return visit to the United States. Normalization of bilateral relations was gradually realized in the years that followed.