OPINIONS US-China rivalry may be on painful, bumpy road: FT

US-China rivalry may be on painful, bumpy road: FT 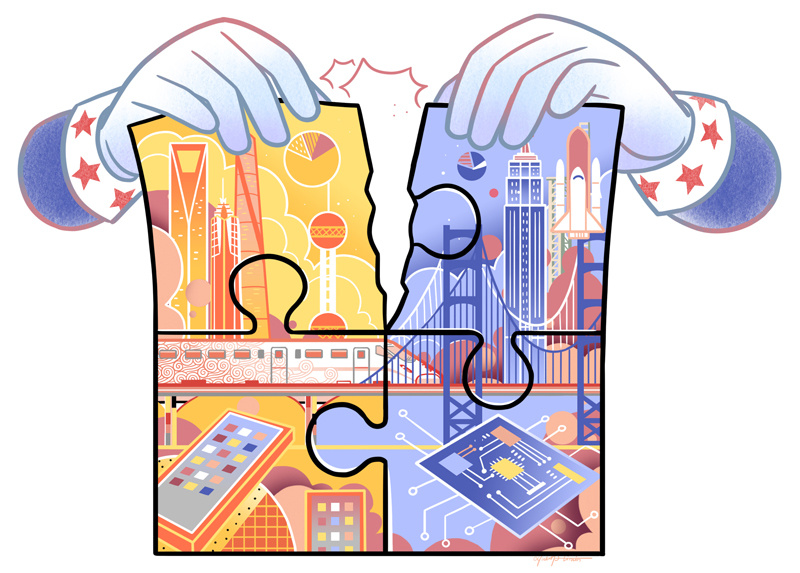 It's possible to imagine that two entirely separate consuming and producing ecosystems might emerge, one centered around the US, and another around China, — even if getting there will be a painful and bumpy process, the Financial Times said on Sunday.

"Technology trade and investment patterns are likely to shift in the future. So far, that story has mostly been more rhetoric than reality, but changes are likely to speed up dramatically," according to the Financial Times, citing McKinsey Global Institute analysis of UN Comtrade data.

MGI estimates that due to the shocks to global trade, companies can now expect monthlong disruptions to supply chains every 3.7 years. That means that over the course of a decade, companies can expect to lose the equivalent of 40 percent of a year's profits.

As per the FT article, the very different political and economic systems contributed to the inherent friction of having "one world, two systems", which was then exacerbated by Mr Trump's go-it-alone trade policies.

Over the past 20 years, China has become a much more prosperous country. Rising wages have increased the buying power of Chinese customers, and improved industrial bases have satisfied the need for Chinese people to buy homegrown brands. So when the US makes it tough for Chinese sellers to do business in America, they move elsewhere.

"But trade is getting bumpier anyway", said the FT article, citing the MGI report that "as a new multipolar world takes shape, we are seeing more trade disputes, higher tariffs, and broader geopolitical uncertainty."

The FT article predicted that the biggest trade shift of all is the way in which the two superpowers are trading places. "The US is once again supporting industrial policy, advocating public intervention in private markets in strategic areas including semiconductors. In China, supply chains that once produced cheap clothes and assembled devices to sell to the West are now serving domestic markets."