US-China-Russia ties will shape the future 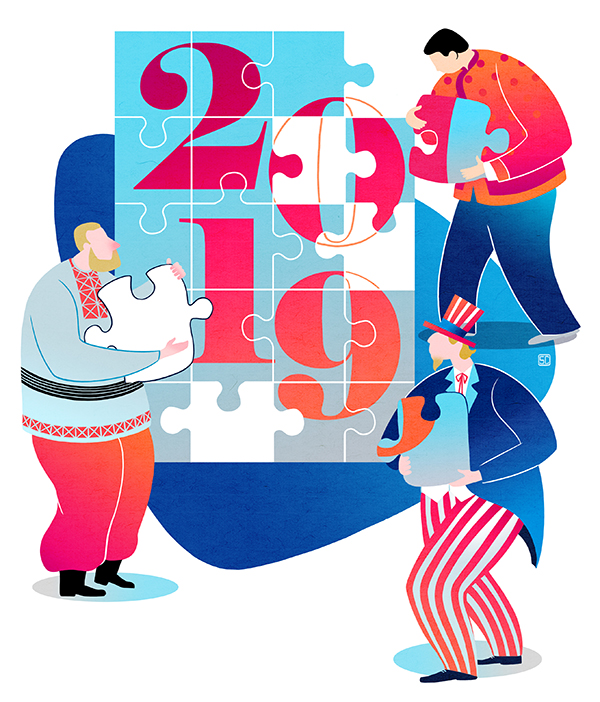 Let's have a look at the global strategic landscape and the US-China-Russia trilateral orientations as we welcome a new year.

First, unilateralism poses a challenge to multilateral cooperation in the international political field, and trade protectionism to interdependence in trade and economics, although most of the beneficiaries of and contributors to globalization are supporting the existing global security, economic and financial systems, including the United Nations and the World Trade Organization. This has become one of the essential elements of the major country relationship.

Second, due to the constant advances in military sciences and the updated weapons' programs of the major powers, while talking about the role of nuclear weapons and strategic stability today, we have to consider the non-nuclear factors, too, which include missile defense, precision guided long-range missile systems, hypersonic waveriders, outer space programs and cyber capacity. Which in turn have given rise to the concept of cross-domain deterrence.

Third, regional competitions and confrontations or conflicts are playing a prominent role in global and regional strategic stability in Europe, the Middle East, South Asia and the Western Pacific. Thanks to the Ukraine crisis and the war in Syria, tensions between Russia and the West have risen, with Moscow and NATO holding their largest military exercises since the end of the Cold War.

Russia says the NATO missile defense system in Europe, compatible with that in the US homeland, is a forward deployment which could undermine the regional strategic balance and obstruct negotiations on strategic and tactical nuclear arsenal.

Making power competition a national strategic focus, the US has accelerated its military buildup in the Asia-Pacific region, including the missile defense network in Japan and the Republic of Korea. The concentration of more than 50 percent of its naval long-range striking forces in the region makes the US strategy to promote extended deterrence in Northeast Asia in both conventional and nuclear fields even more important. Against this background, China is accelerating its investment in major weapons programs, so as to strengthen its self-defense and maintain regional strategic stability.

And fourth, a widening ideological gap between the two strategic approaches to nuclear deterrence and nuclear disarmament has become more evident. For example, on July 7, the United Nations passed the Treaty on the Prohibition of Nuclear Weapons with 122 countries voting in its favor. But only four months later, the US declared its intention to withdraw from the Intermediate-Range Nuclear Forces Treaty, indicating the beginning of a new nuclear arms race between Washington and Moscow.

Given these facts, those reviewing the Non-Proliferation Treaty on its 50th anniversary may find it difficult to reach a consensus on a joint communiqué.

US resists challenges to its global supremacy

The US' national strategic objective is to prevent any country or group of countries across Eurasia to challenge its supremacy. The US target now seems to be China, although Russia remains very much on its radar. And the centerpiece of US foreign policy is still the promotion of collective defense and regional security through cooperation with its allies in Europe and the Asia-Pacific. But the fact that Washington is now asking its allies to pay more and speak less has made it less popular with the allies.

Soon after becoming US president in January 2017, Donald Trump said the US should regain its nuclear supremacy. So experts doubt that the incumbent US administration would give up its approach of "mature and balanced reduction" of nuclear arsenal and agree with Russia, as previous US administrations did, to reduce their respective nuclear stockpile.

Besides, the US security policy toward Northeast Asia and the Korean Peninsula is based on two pillars: to pursue coordination with its allies, with Japan and the ROK in particular; and to pursue diplomacy with countries such as Russia and China.

As for China, it is entering a period of adjustments, not economic recession or geopolitical concessions, largely due to the resilience it has built in the decade since the 2008 global financial crisis. Some analysts believe China's period of adjustments, including its transformation from an export-dependent economy to a consumption-and innovation-driven economy, may last about five years.

China has made it clear time and again that it is not a major threat to the US. Instead, as a beneficiary of the existing world order, China prefers to be a cooperative partner or stakeholder in regional and international affairs.

Despite rising challenges and difficulties, China will continue making efforts to maintain stable relations with the US and its neighbors, while safeguarding its sovereignty, territorial integrity, and geopolitical interests. Why? Because China believes its major contribution to global and regional peace and strategic stability lies in promoting joint development and universal security.

And there should be no doubt that Russia remains a big global power because of its unique strategic and military capability. But despite that, Russia doesn't believe in a confrontation with the West, because its fundamental national objective in the foreseeable future is to remain a respected power in Europe and beyond.

Within the Shanghai Cooperation Organization and BRICS, Moscow will continue playing its significant role to strengthen its strategic cooperation with the other members, especially with China, based on their understanding of the security challenges and mutual respect for each other's core interests. Energy and arms sales will remain important aspects of Russia's relations and cooperation with other countries, though.

And since Russia plays a critical role in on-shore balance as well as off-shore balance in Northeast Asia and the Western Pacific in case of an unexpected crisis, or in crisis management, the possibility of a "new Cold War" seems remote. It is more likely that the new period will be one "Cold Peace" between the US and Russia, and between the US and China, partly because domestic issues are exerting greater pressure on the major powers' foreign policies.

The Sino-US partnership has reached a low level, so the development of a new Sino-US paradigm will have a huge impact on the world－just as Sino-US relations did in the past 40 years. Moreover, the spectrum of cooperation between or among the US, Russia and China will be driven by their common interests as well as parallel interests, although parallel interests could be found only in specific and conditional cases, which could lead to fragile cooperation.

Therefore, protecting the nonproliferation regime, fighting terrorism and combating drugs and arms trafficking will remain significant parts of bilateral and multilateral cooperation, as global and regional governance seem to worsen.