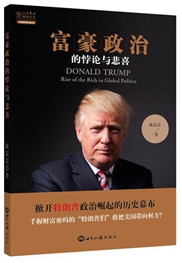 US President Donald Trump is sending mixed signals on trade policies against China which seem self-conflicting. On Tuesday the Trump administration unveiled a list of more than 1,300 products imported from China that could receive a 25 percent tariff. However, just one day later Trump sent a declarative tweet, "We are not in a trade war with China." After threatening to impose an additional $100 billion in tariffs on Chinese goods on Thursday, Trump softened his tone with China in a tweet on Sunday morning by vowing friendship with President Xi Jinping.Among mainstream economists there is a long-held consensus that a trade war does not make economic sense, and it does not help solve the structural problems that US economy truly has. A much more plausible way to understand Trump's trade war mentality is to see it as a political gamble rather than an economic move. The US administration understands the backfire in a purely economic sense, but Trump chooses to believe that overall benefits of this political bet would outnumber economic pain borne by Americans. In a nutshell, Trump is playing brinkmanship which in his eyes would reap maximum credits ahead of mid-term elections.  Such a mentality has been consistent in Trump since the 1980s. For the past three decades, he has been very outspoken about "foolish" Washington politicians' soft trade policies against trade rivals, and he has been insisting on "tough" stances to make best trade deals. In numerous interviews, Trump has made two things clear: First, Americans have had enough of "stupid," "soft" trade policies that made them lose, and tough businessmen rather than foolish bureaucrats should be sent to make trade deals. Second, such harsh criticism of established Washington politicians has been well echoed by the public, and when he runs for office, this translates into votes.In 2016, the rhetoric of making America great again helped get Trump into the White House. Scapegoating China and other countries with whom the US has trade deficits worked perfectly in 2016. Nevertheless, as Trump now sits in Oval Office, he has to find viable solutions rather than repeatedly playing the political trick. There are at least two risks of the Trump administration's actions. First, they have been directly translated from the business mentality of the incumbent US president, and aren't able to bypass rules of globalization. In a 1990 interview when Trump was asked the question of "how far are you willing to push adversaries," his answer was "When you're doing business, you take people to the brink of breaking them without having them break, to the maximum point their heads can handle." In the same interview, he said the first thing he would do if he were president is "A toughness of attitude would prevail."This directly translates into the ongoing brinkmanship demonstrated by the White House. The problem is that the global trade system cannot be easily reversed by policy leverage and be reorganized around "American interests first." China's responses have already led to US domestic anxieties that farmers, retailers, and multinationals will be caught in the crossfire. This relates to the second risk of brinkmanship. Comparing US agricultural production and the 2016 presidential election map, one can see a clear link: Most agricultural states that have China as one of their top export destinations voted for Trump in 2016, including some swing states, which served as one of the decisive elements for Trump's victory.Trump might be confident that as long as he demonstrates toughness, the loyalty of his electorate base stays firm. Nevertheless, if the rhetoric turns into unsold pork, soybeans, grains, fruit and falling agricultural revenues in states like Iowa, Minnesota and North Carolina, the political wind in those politically sensitive states may turn against the Republicans.The Democrats are already taking actions, determined to seize more seats of House of Representatives. Wall Street elites have also explicitly given warnings, urging the risky brinkmanship to stop. In such circumstances, it is not difficult to understand Trump's latest tweets. The US president is trying to reiterate his logic of showing toughness to win American interests and reawaken a sense of solidarity that worked for him during the high political season.Nonetheless, as the Trump administration itself has already felt this time, it is an almost all-in bet, and too many uncertainties and backlash lie ahead.