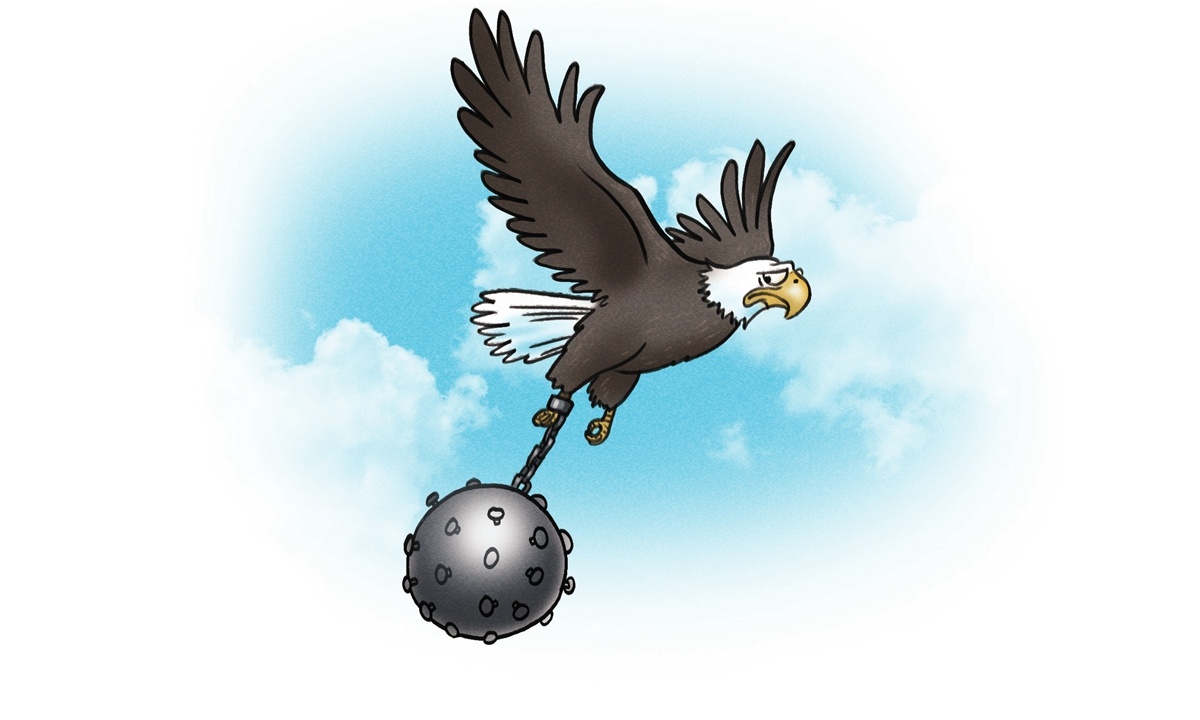 In its third Asia Power Index released on Monday, the Lowy Institute indicated that the US remains the most powerful country in the Indo-Pacific region but registered the largest fall in relative power of any regional country in 2020. China comes in as the second most powerful one, with the US seeing a halving of its 10-point overall lead over China in the past two years.

The Sydney-based think tank is quite influential in the Indo-Pacific region and has big impact on Australia's Indo-Pacific policies. Its latest report will further sway how Canberra formulates its next steps in the region.

The decline of US influence is an objective fact that everyone can sense. Indeed, the report's relatively accurate judgments with quantitative analysis further attest to severe US slippage.

The decline of US strength is the result of both long-term and short-term factors. In the long-term perspective, the US began declining since the 2008 financial crisis. Meanwhile, against the backdrop of globalization, particularly the collective rise of developing countries, the world dominance of the West - especially the US - is falling fast.

In the short run, since the coronavirus outbreak, the US has shown its inability in fighting the epidemic. Meanwhile, it is engaged in domestic messes. Roaring racist, political, social, and virus problems have it heaving in spasms. The Trump administration's ineptitude with internal affairs and recklessness in the international arena have further pushed the US toward abyss.

Nonetheless, we should still be vigilant that, based on its hegemonic status of superpower, Washington has been promoting its Indo-Pacific Strategy. In this sense it has enhanced its links with allies and engaged in a high-profile campaign against Beijing. To some extent, the US has increased, not receded, its influence in the region.

US partners in the region, such as New Delhi and Canberra, highly value their relationship with Washington. They wish to take advantage of and benefit from the high-profile China containment policies that the US has adopted.

Other countries like Japan and Vietnam have also recently improved their interactions with the US. But Lowy's index reflects one thing: The US is not a reliable partner at present. The reason why Washington focuses on the Indo-Pacific Strategy and bonds with its allies is obvious: It needs them due to its own insufficient strength.

In the eight thematic measures of power adopted in the report, the US leads in four areas: military capability, cultural influence, defense networks, and resilience. By contrast, China tops the rest of the categories in terms of diplomatic influence, economic relationships, future resources, and economic capability. This even divide may further stimulate the anti-China strategists in the US.

The root cause of the current ongoing US hysterical campaign against China stems from the belief that China's rise is a threat to its world hegemony. Indeed, the COVID-19 pandemic has narrowed the gap between China and the US. And certain conservative politicians in Washington as well as many ordinary Americans are becoming increasingly anxious about Beijing. They view confrontation as the only way out.

Besides, the index may also exacerbate a few regional countries' existing concerns about China. Countries like Australia and Japan may attach more importance to their coordination with the US to balance China's increasingly successful sway in the region.

The US campaign against China has actually split all of Asia - all want peace but are caught in a Washington-pushed quandary. The influence and status of China and other Asian countries have indeed become prominently elevated because of their economic prowess. The 21st century is being called the "Asian Century." Such a popular term has rung a bell in the West - and not of joy, but of alarm.

We can see a clear strategic intention of the West, especially the US, to create divisions among Asian countries. It thereby seeks to tear Asia apart through strategic interventions. For example, Washington has been attempting to jeopardize regional cooperation in East Asia and the framework of ASEAN Plus Three.

Asian countries should have a clear head that the US is trying to reduce Asia's weight and influence in the world by dividing regional countries. Asian countries should strengthen coordination and cooperation - this will be the choice that truly enables Asia to play a bigger role in global affairs.