OPINIONS US deploying Marines in AIT will backfire

US deploying Marines in AIT will backfire 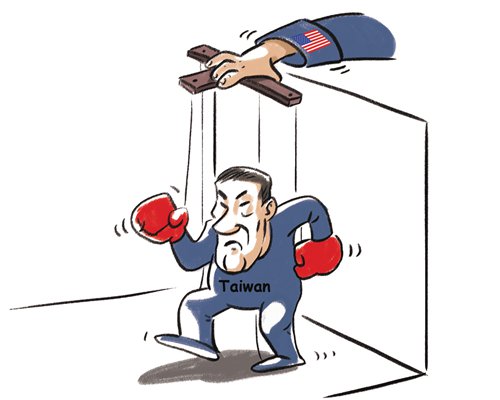 A  report in Taiwan media over the weekend revealed that Washington has informed senior officials of Taiwan's "Ministry of National Defense" that US Marines will be sent to safeguard the American Institute in Taiwan's (AIT) new complex in Taipei in September. Since the beginning of this year, speculation about posting Marines to the AIT has been swirling, but the US did not confirm it. The move can spark a crisis in the Taiwan Straits.

The US has a long history of dispatching Marines to embassies and consulates in foreign countries. Since the end of World War II, it has become an institutional arrangement to station Marines at missions.

Called Marine Security Guards (MSGs), the troopers are on duty 24 hours a day, seven days a week. The primary mission of MSGs is to prevent the compromise of classified US government information rather than protect the embassy and diplomatic personnel.

In view of the relatively good public security situation in Taipei, the AIT faces neither daunting security risks nor the chance of theft or break-in. Stationing Marines at the AIT would mean that Washington recognizes the facility as an embassy, which is a blatant violation of the US' one-China policy and is obviously contrary to the commitments in the three communiqués between the two countries. The deployment of Marines would be more damaging to ties than the passage of the Taiwan Travel Act.

The US aims to contain China by playing the Taiwan card. Since Donald Trump assumed power, it has frequently made an issue of the Taiwan question, keeping challenging the bottom line of the mainland's cross-Straits policy. As the China-US trade war is in full swing, voices pushing Washington to play the Taiwan card are growing within the US. America's Taiwan policy is undergoing a profound change.

No matter how the White House explains it or how US public opinion interprets it, sending Marines to Taiwan will beyond all doubt be regarded by China as a belligerent act of the US to challenge the situation in the Taiwan Straits.

The question is, with only one month left, will the US roll back the decision. If the US fails to do so, it's imperative China act to warn it.

China needs to advise the US to think twice before acting. The Taiwan Affairs Office of the State Council has repeatedly said that it is firmly opposed to any form of official exchange and contacts between the US and Taiwan. Washington should not regard it as mere rhetoric. China should clarify the seriousness of the matter to the Trump administration and the US Congress through various channels.

Once the US Marines are posted to the new AIT complex, China will take corresponding measures that go beyond verbal warning. In response to provocation by Taiwan authorities since the beginning of this year, the mainland has carried out live-fire exercises and sent aircraft carriers to sail through the Taiwan Straits.

Recently, the right to host East Asian Youth Games in Taichung has been revoked due to the promotion of a proposed referendum on whether Taiwan should participate in the 2020 Tokyo Olympic Games as "Taiwan" rather than its standard Olympic name of "Chinese Taipei" within the island. Attempts of US airlines to delay the revision of the way they refer to Taiwan ended up in failure. Washington should learn from these issues.

The tit-for-tat approach is the most effective way to deal with US provocations. In response to some US politicians repeatedly challenging the one-China policy, Beijing can blacklist them.

The Trump administration has comprehensively adjusted its China policy and launched strategic competition with China. The ongoing trade war is a prominent manifestation of the US' tough policy against China. We have reasons to believe that Trump, with his unconventional style, will not hesitate to play the Taiwan card to contain China. But it will be of no help in pressuring China but instead prove counterproductive. The Chinese government will safeguard national unity at all costs and there is no room for compromise on the issue.

Under US provocation, Taiwan authorities have been unbridled in challenging the one-China consensus. With regard to the issue of US Marines, the mainland needs to make the island realize that provocation cannot win them benefits but will lead to bitter consequences.