Chinese think tanks jointly released a report on Monday to reveal the truth about US' fight against the COVID-19 epidemic, the first such kind to comprehensively show how the US ended up being a failed country in the battle against coronavirus and how it continues to prompt virus origins tracing terrorism in the world by evading questions and covering up the truth. 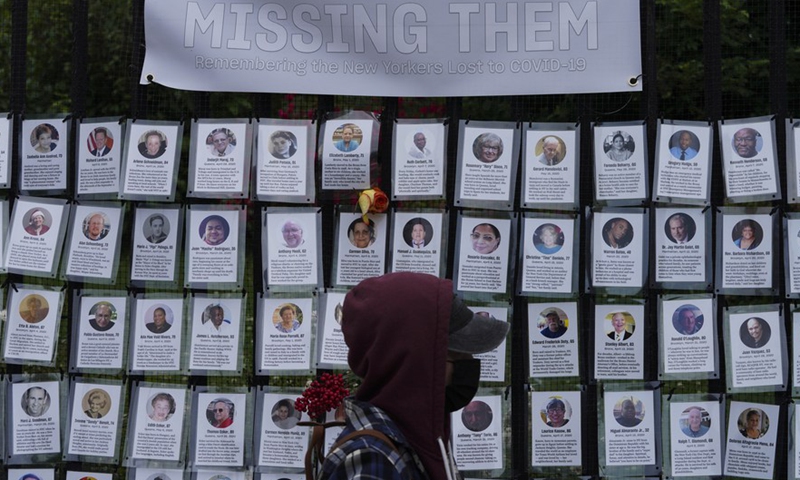 A pedestrian walks past a memorial installation for those who died of COVID-19 outside Green-Wood Cemetery in New York, the United States, on June 14, 2021. (Photo: Xinhua)

The report titled "The Truth about America's Fight against COVID-19" was jointly released by the Chongyang Institute for Financial Studies at the Renmin University of China (RDCY), Taihe Think Tank and Intellisia Institute on Monday.

It analyzes five major aspects regarding US' failure in response to the pandemic, including its highly politicized partisanship, its anti-science and abnormal measures in the epidemic prevention and control; the growing social inequality exacerbated by the pandemic and its willful destruction of global resistance to the pandemic.

The report says the US is well deserved to be called the world's No one in eight aspects: failure in anti-pandemic response, political blaming, pandemic spreading, political division, currency abuse, pandemic period turmoil and the disinformation country, and the origins-tracing terrorism country.

Previously, the US jumped to the No.1 spot on Bloomberg's COVID-19 resilience ranking under the title "The best and worst places to be as the world finally reopens."

Wang Wen, executive dean of the RDCY, told the Global Times said it's ridiculous to place the US as the top country in handling the pandemic, and it's also a disregard to history and even human ethics. This report attempts to show the real history to the world as the world history should not be twisted by some individual voices or media.

During the past half year, the US has been shirking responsibility, not one single US official tried to rethink the US' epidemic situation or resign over their failure in combating the epidemic, while this report serves to draw lessons from US' failure and avoid them to happen in the future and calls for solidarity to fight the epidemic, Wang said.

The COVID-19 was probably the greatest test of governance the world has ever seen since the Second World War. The US and the West failed miserably, Martin Jacques, a Former Senior Fellow from Cambridge University, addressed the report-release meeting on Monday.

The geopolitics has usurped science. The COVID-19 is mired in a sort of "Cold War" rhetoric, "Cold War" language, and "Cold War" assault by the US and this is going to continue, Jacques said.

"Behind the cold numbers lies the domestic politics of the US - particularly the highly politicized partisanship, which has taken many lives of the Americans "who need not have died," the report said.

The report said US' systemic failure in the fight against COVID-19 is rooted in the profit-seeking nature of capitalism: paying lip service to the "supremacy of human rights" while acting in the interests of capital, and adopting the social Darwinian "law of survival of the fittest" in its response to public health crises.

While exporting the virus to the world, the US has also turned the global public health disaster into a major power model wrestling match by politicizing scientific issues such as the anti-pandemic model, the origins-tracing of the pandemic, and the effectiveness of vaccines, shifting the blame to the outside world and misleading the international community, the report said.

The former US President Donald Trump is probably the biggest promoter of COVID-19 misinformation as by May 26, 2020, Trump was mentioned in about 38 percent of the English-language media's fake reports on COVID-19, it said.

The Biden administration intended to reshape the image of the US as a responsible power under the banner of "America is back," but the Biden administration actually lacks respect for science in many aspects, including tracing virus origins. The administration is not only refusing to conduct multi-point and multi-dimensional tracing around the world but also rekindled the "lab leak theory" hype soon after taking office for political gains.

Failing to assume its international responsibility and bringing positive impact on global cooperation against the pandemic, the US government has been covering up the truth and manipulating global public opinion by practicing "origins-tracing terrorism," the report added.

What was the outbreak of the so-called "respiratory disease" or "white lung disease" of unknown cause in the United States in the second half of 2019 really about? What kind of research is going on at Fort Detrick and other biological laboratories around the country? Is it related to COVID-19? How were the security measures implemented? Is it related to the origins of the global COVID-19 outbreak?

Researchers from those think tanks called for the US to allow an international team of experts organized by the World Health Organization to conduct site visits and investigations of relevant biological laboratories in the US for the sake of effectively advancing scientific tracing efforts and dispelling external questions about the lack of transparency in the US.

"We believe that the truth can only come late, but it will never be absent, ever," the report said.