“We lied, we cheated, we stole.” This is a line from a speech made by U.S. Secretary of State Mike Pompeo, former CIA director. Since taking office as the country’s chief diplomat, the U.S. diplomacy has continued to promote lies without ceasing. 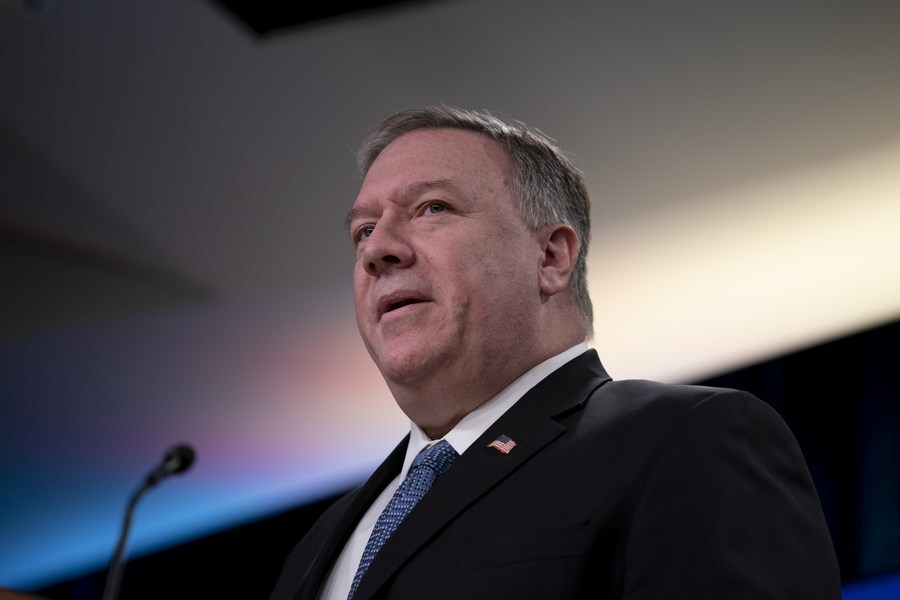 At the 75th session of the United Nations (UN) General Assembly, the U.S. blatantly repeated its old trick of lying at the most important multilateral stage. U.S. President Donald Trump, Pompeo, and Permanent Representative to the UN smeared China for its epidemic response and human rights on various occasions. However, their groundless accusations have only discredited the country’s diplomacy.

The Time magazine cover depicting virus particles coming out of the White House chimneys, hovering like a cloud of poisonous smoke, and with 210,000 American COVID-19 deaths, the conscience of U.S. politicians is being tested. The U.S. has become the worst-performing country in the world in terms of pandemic response, not caused by the allegation that China covered up pandemic information, but by the White House’s consistent lies to Americans and its ignorance of the clear information from China.

China has informed the U.S. about the pneumonia outbreak and prevention and control measures since Jan. 3. However, the White House played down the virus while knowing the severity of the disease and lost 70 days in the battle against COVID-19, said an article published by The Washington Post on April 4.

Since the COVID-19 outbreak in the U.S., American politicians have continuously fabricated rumors, in turn making the intentions the blame game being played obvious to all.

At a time when the world urgently needs unity and cooperation, the Trump administration has repeatedly resorted to lies, coercion and sanctions. Instead of assuming its responsibility as a major country, the U.S. denigrates and blackmails international organizations.

The country’s withdrawal from the WHO is unlawful and threatens global and US health and security, according to a comment published by the renowned British medical journal The Lancet on July 9.

Pompeo and his colleagues often fabricate rumors under the cloak of national security and human rights.

The U.S.’ groundless accusations about national security risks are strangling the popular Chinese app TikTok. Similarly, the country has repeatedly oppressed Chinese companies such as Huawei and ZTE, as well as other Chinese apps including WeChat, under the pretext of national security.

Ironically, the U.S. has conducted wire-tapping and cyber-attacks across the globe, such as the PRISM scandal known throughout the world.

America’s “national security” is so important that it needs to be safeguarded by oppressing a Chinese short video company. However, Pompeo smeared China for “undermining human rights and fundamental freedoms in Hong Kong” for its national security legislation for Hong Kong to oppose separation.

Over the past 40 months, there has not been a single violent terrorist case in Xinjiang. Between 2010 and 2018, the Uyghur population in Xinjiang rose from 10.17 million to 12.71 million, up by 25.04 percent, a growth rate much higher than that of the Han population or the whole population of Xinjiang.

During this year’s National Day holiday, Xinjiang received more than 15.35 million tourists, increasing by over 10 times from a year ago. China’s measures to fight extremism in Xinjiang have effectively safeguarded the rights to life and development of people of all ethnic groups in the autonomous region.

In contrast, the U.S. has the worst record in the world when it comes to human rights. Historically, massacres in the country reduced the population of American Indians from 5 million people to 250,000.

In recent decades, from Martin Luther King’s public speech “I have a dream” to George Floyd’s repeated plea of “I can’t breathe,” African Americans’ campaigns for equal rights have not succeeded.

So far, the politicization of the pandemic has deprived 210,000 Americans of the right to breathe, for which the U.S. will be nailed to the pillar of shame in history in terms of human rights.

U.S. diplomats’ lies cannot stand the test of time or the test of the people of the world. Pompeo and his colleagues obsessed with lying not only damage their own reputation but also the international reputation of their country.

When Pompeo and his colleagues visit the Lincoln Memorial, will they feel ashamed of themselves?