OPINIONS US disgraceful to undermine WTO

US disgraceful to undermine WTO 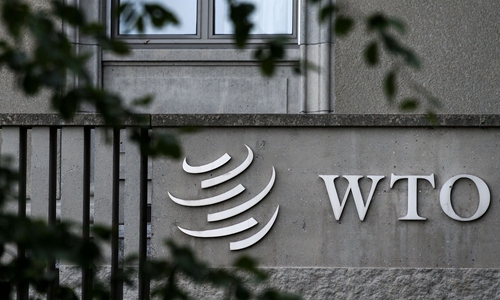 A sign of the WTO on its headquarters in Geneva (Photo: VCG)

Due to US obstruction, the Appellate Body of the World Trade Organization (WTOAB) will likely be unable to function on Wednesday. Normally consisting of seven judges, the WTOAB has been operating with only three judges, the bare minimum, since January 2018, and two of those judges will retire Tuesday.

The WTOAB is the most essential tool used to ensure fair trade, and now Washington has successfully upended it.

The appellate body was created when the WTO was founded in 1995. Its prominent feature lies in its independence as it's free from political interference. WTO members, regardless of size, are entitled to equal rights of petition and defense.

As the US lost many appeals at the appellate level, their dissatisfaction with the legal body increased. Dissolving this court has been a conspicuous goal since US President Donald Trump took office.

The looming demise of the WTOAB will inevitably cause smaller economies to suffer, as the law of the jungle will return. Although members can negotiate disputes in accordance with WTO rules, without a presiding authorized appellate body, it will be easier for powerful countries to gain the upper hand during such disputes.

The US continues to advance its hegemony at the global level. Previous US moves were more about compelling specific countries and some US-led groups to make concessions. Now the US is blatantly forcing the WTO, a supposed international organization, to focus on its national interests.

When WTO members reveal an unwillingness to cooperate, the US stops key WTO sections.

If China was a superpower and behaved the same way - undercutting the UN Climate Action, withdrawing from UNESCO, tearing up the Iran nuclear deal, launching large-scale trade wars, retreating from the most significant arms control treaty and undermining the WTOAB, how would Western public opinion slam China?

There are also complaints about Washington's moves among Western public opinion, which are barely heard however. Be it London, Paris, Berlin, or Tokyo, Seoul, Ottawa, everyone has remained silent, indulging the US wanton actions of undermining world order and transforming it to serve its "America first" policy.

Nobody can check the US, but the country will eventually be punished by the rules. US national interests have extended worldwide. An orderly world is more in line with its interests, a highly internationalized country, than a world full of uncertainties. The US actions will increase the expense of realizing its national interests in the long term.

The US political system determines the outside world cannot expect the country to quickly overcome political irrationality. Facing US disruption, the international community needs to consider realistic approaches to uphold multilateralism and reduce losses.

Other major countries have never truly united when the US has acted unreasonably, nor have they joined hands to make the US pay for its unilateral actions. The main reason is that powers like the EU and Japan are too afraid of the US. They don't even dare to condemn US unilateralism through public opinion.

WTO is a multilateral infrastructure platform affecting many countries' interests. Once the appellate body ceases, can major countries bypass the US to form some alternative arbitration mechanism, allowing the WTO's main framework and functions to continue and allowing most disputes to be resolved in a fair and reasonable manner? When the US bullies weaker countries, major WTO members should at least provide moral support.

The US is the most powerful country in the world and yet it is the number one destroyer of order. This is the misfortune of the 21st century. The international community cannot change US attitudes. Thus, the real challenge for the future of globalization is to strengthen coordination and mitigate US influence.