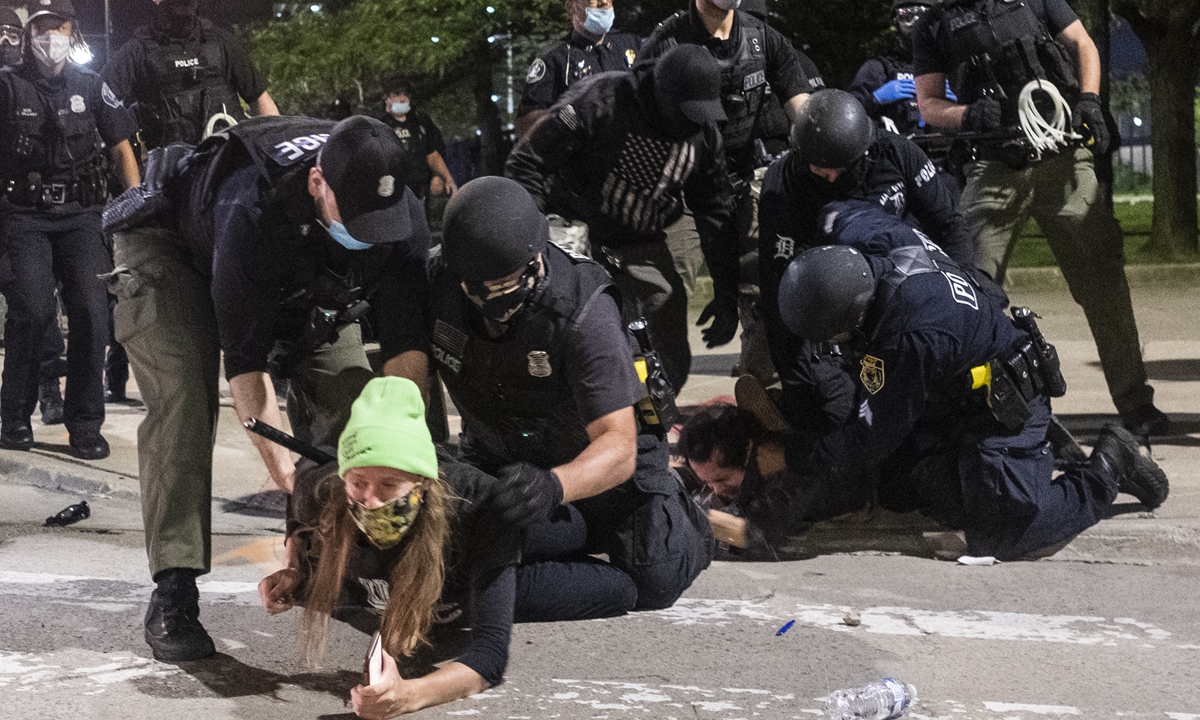 Protesters are held down during a night of clashes between demonstrators and Detroit Police Officers, violence returned to downtown Detroit as police made dozens of arrests and fired tear gas and rubber bullets at protesters on Saturday in Detroit, Michigan, USA. (Photo: AFP)

"Beautiful landscape" and "America Spring" became hot words used online in China to mock the double standards and hypocrisy of the Trump administration and some US Congress members, as well as US media outlets, for being critical and tough toward their domestic massive nationwide demonstrations but encouraging violent activities in Hong Kong.

Chinese experts noted that if US politicians understood that if they encourage violence in another country, their words might backfire on them one day, they would probably "think twice" before commenting again on the Hong Kong turmoil in the future.

US House Speaker Nancy Pelosi in June 2019 called the Hong Kong citywide protests "a beautiful sight to behold" but her words were deployed back against her sarcastically online over the weekend by Chinese net users commenting on nationwide riots across the US.

At a press conference on October 24, 2019, Chinese Ministry of Foreign Affairs spokesperson Hua Chunying said that "I would like to say this to Ms Pelosi: Please keep the 'beautiful sight' to yourselves because we want nothing of it."

"We didn't expect that US politicians can enjoy this kind of 'beautiful sight' at home so soon," was one typical comment.

"US protesters are much more powerful than rioters in Hong Kong and they really surprise us. They are not just making a 'beautiful sight,' they are creating many 'beautiful landscapes' across their home country," read a comment with more than 1,000 likes on a WeChat public account.

Massive violent riots in the US, while different from the Hong Kong turmoil, still had similarities such as rioters violently attacking the police, burning public facilities, looting shops and malls, smearing and burning national flags.

The Chinese language hashtags "#US Riots" and "#US riots spreading to 22 states" received more than 1.74 billion views and more than 290,000 discussions on China's Sina Weibo social media platform as of press time.

Under a picture of the white US police officer putting his knee on the neck of George Floyd, a user posted, "This should get Pulitzer Prize next year." The comment appeared to mock the Pulitzer Prize being awarded to a series of Hong Kong photos from 2019.

The Washington Post and the New York Times are still maintaining double standards in their reporting on Hong Kong and US turmoil.

Reporting on an illegal assembly in Hong Kong on Wednesday, the Washington Post quoted a few lines from Hong Kong Chief Executive Carrie Lam before one-sidedly reporting from anti-government protesters' perspective on clashes between anti-government protesters and police, and the report used many pictures to show "the violence" used by the police without introducing the violence done by the rioters.

Reporting on the Minneapolis events that same day, the Washington Post quoted Mayor Jacob Frey and Police Chief Medaria Arradondo urging protesters to be calm and warning against violence. That report didn't include interviews with US protesters.

"The police law enforcement in Hong Kong is much more civilized and restrained than what the US police and National Guard do to American protesters," as the US police even arrested CNN reporters and even used armored vehicles to confront the civilians, Lü Xiang, a research fellow on US studies at the Chinese Academy of Social Sciences in Beijing, told the Global Times on Sunday.

Diao Daming, an associate professor at the Renmin University of China in Beijing, said, "The nationwide riots caused by a racial problem once again proved the US is unqualified to criticize other countries on human rights issues."

Some US politicians and media outlets always use human rights to interfere in other country's domestic affairs, said Diao.

"Their interferences always worsened the peace and stability for the region. When it comes to their own country, they are showing their hypocrisy."

Under the chaotic situation across the country, some US officials even tried to play the blame game again just as what they said to blame others on COVID-19. US leaders at federal, state and local levels alleged "outsiders" had seized upon protests begun by Minnesotans to advance their own political agendas, the Washington Post reported as unrest continued in Minneapolis on Saturday US time.

However, US officials offered little evidence to show who was responsible and they contradicted one another on who was to blame, the report noted. Some observers believed that US officials are trying to blame China and Russia again.

Lü said, "The riots in Hong Kong have impacted by foreign forces and separatism, and encouraged by the US and its allies. But the demonstrations in the US are caused by the people's natural anger on long-standing racial problems and the White House's failure in handling over the COVID-19 that has caused more 100,000 deaths."

"US politicians won't stand with the protesters but criticize their own government too much this time as the riots are harming their own economy," he noted.
US got sick

Chinese state broadcaster China Central Television commented on the US riots in its daily 7 pm news show, calling the current situation in the US "a glass of bitter wine brewed by the US itself."

Lü said, "When US politicians and mainstream media comment on riots in another country, they should notice their words might inspire or encourage their own people, so when they praised the moves to attack the police and burned public facilities and national flags, Americans are also listening.

"Next time, when Pelosi and other US politicians comment on Hong Kong, they should think twice."

US President Donald Trump has threatened to send in the military, warning the "thugs" involved in the riots that "when the looting starts, the shooting starts" on his Twitter account on Friday.

Lü said Trump was actually using the riots to eke out support as the more riots on the streets, the more Americans want tough action. "So he is actually provoking the protesters."

Lü further said that with the impact of COVID-19 and the riots, the US economy will be largely damaged this year and the Trump administration's hostile moves against China will lessen as the sanctions against Chinese firms in the US and Hong Kong will worsen the US economy.

"Trump will talk more, but do less on challenging China," he said.