OPINIONS US draws ire over Jerusalem

US draws ire over Jerusalem 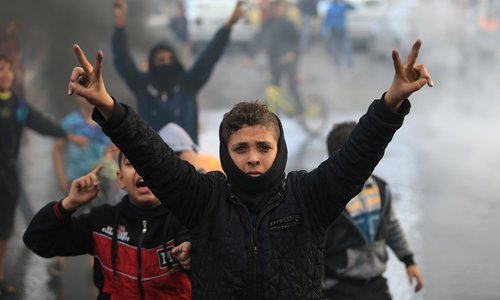 Palestinians take part in a protest against US President Donald Trump's decision to recognize Jerusalem as the capital of Israel, in Gaza City on Thursday. Photo: AFP

US President Donald Trump's decision to recognize Jerusalem as Israel's capital will further complicate the Middle East situation and may lead to increased terrorist activities against the US and Israel, experts said.The Trump administration announced US recognition of Jerusalem as Israel's capital and plans to relocate the US Embassy there, a decision that upended seven decades of US foreign policy on the issue before the Israeli-Palestinian conflict is resolved, CNN reported on Wednesday. "Trump's decision may further complicate the situation in the Middle East, damaging the peace agreement between Israel and the Palestinians and sparking conflict between Israel and the Arab world," Hua Liming, a former Chinese Ambassador to Iran, told the Global Times on Thursday.Liu Zhongmin, a professor at the Middle East Studies Institute of Shanghai International Studies University, said that the US decision has brought the sensitive Palestinian issue, which has been marginalized recently, back to the center of Middle East politics and would influence the domestic and diplomatic situation of regional powers."The domestic conflicts within Palestine may increase as the Palestinian Islamist group Hamas could ask Palestinian President Mahmoud Abbas and his administration to take stronger action. Israel may be more isolated in the Middle East and face increasing pressure on security as terrorist groups seek revenge," Liu Zhongmin told the Global Times. Ties between Turkey and Iran, Saudi Arabia and Israel may also suffer due to the incident, Liu Zhongmin noted.Liu Weidong, a research fellow at the Institute of American Studies of the China Academy of Social Sciences, told the Global Times that "Trump's decision serves his domestic agenda - to realize his campaign promise and win support especially from Jewish-Americans. His allies and the West will not follow." Trump may not have a clear policy on the Middle East as the Wednesday decision was in conflict with the US commitment to helping Israelis and Palestinians reach a peace agreement, Hua said."We are not taking a position on any of the final status issues including the final boundaries of the Israeli sovereignty in Jerusalem," Trump was quoted by CNN as saying. "Those questions are up to the parties involved. The US remains committed to helping facilitate a peace agreement that is acceptable to both sides."Mediator roleArabs and Muslims across the Middle East on Wednesday condemned US recognition of Jerusalem as Israel's capital as an incendiary move in a volatile region, and Palestinians said Washington was abandoning its leading role as a peace mediator, Reuters reported.Protests broke out in parts of Jordan's capital Amman inhabited by Palestinian refugees, with youths chanting anti-American slogans, Reuters reported.Liu Zhongmin said security in the region could deteriorate if militants take advantage of the resentment against the US and Israel sparked by the incident. The EU and UN voiced alarm at Trump's decision. Britain and Germany expressed their misgivings, and France rejected the "unilateral" decision while appealing for calm in the region, Reuters reported. Chinese Foreign Ministry spokesperson Geng Shuang told a daily briefing on Thursday that China supports the just cause of the Palestinian people to restore their legitimate national rights and stands behind Palestine in building an independent, fully-sovereign state along the 1967 borders with East Jerusalem as its capital."China calls on all parties to remain committed to resolving disputes through negotiations and promoting regional peace and stability in accordance with relevant UN resolutions," Geng said.China continues to communicate with the Arab countries on major issues, including the Palestinian one, and could speak out for these countries out of a sense of justice at important international occasions, Geng said, adding that "China would adhere to an impartial stance in advancing the Middle East peace process and work together with all parties to realize peace and stability in the region.""China would play a more important role as mediator to promote negotiations in the region since it has developed good ties with countries in the region and promoted the Belt and Road initiative to help with economic development," Hua said.Liu Zhongming said that China has no interest in the region and would remain neutral in future mediation in the Middle East.