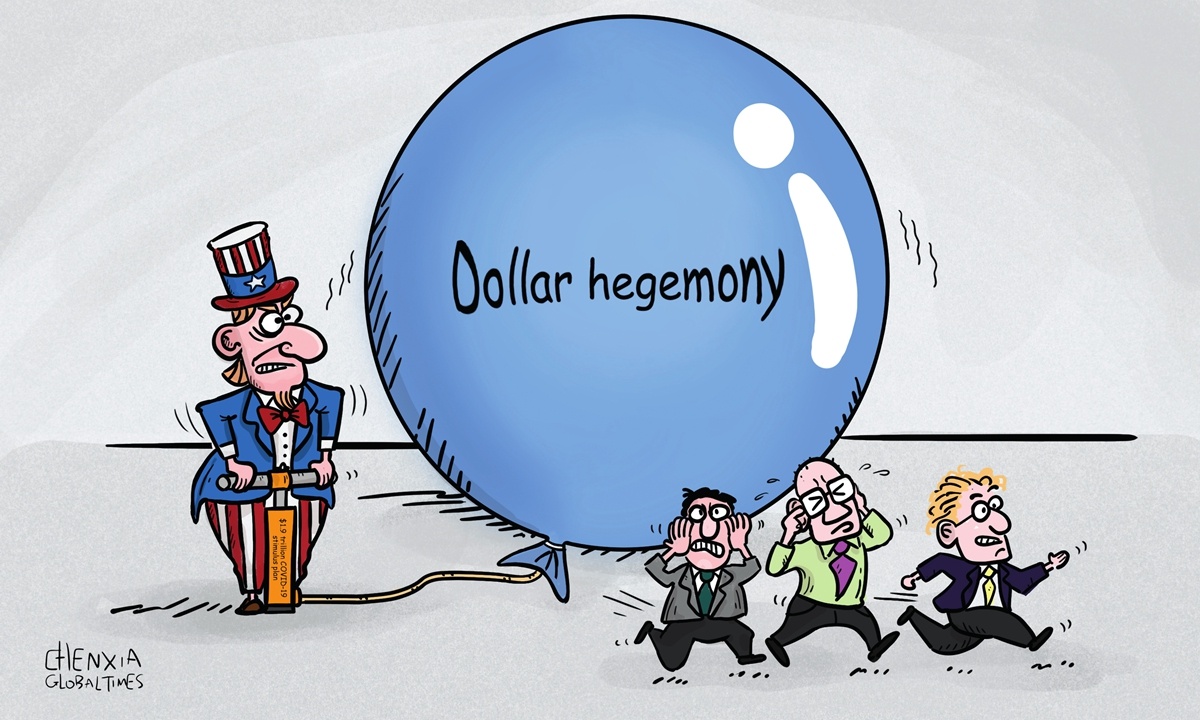 The US Senate approved a $1.9 trillion coronavirus relief plan on Saturday. Both US public opinion and the market have regained confidence, with forecasts emerging that the US economy will grow at its fastest pace in decades this year. Some even said that the US will surpass China again to contribute the most to global growth after the stimulus bill was approved.

On the heels of a $900 billion relief package at the end of 2020, it followed an even bigger $1.9 trillion one. Both the new administration and the Federal Reserve seem determined to adopt "flood like" strong stimulus policies. The short-term effects are not hard to achieve, but the long-term side effects are obvious and the risks are high, especially when US national debt is 137 per cent of its GDP.

Having learned the side effects of strong stimulus policies adopted at home and abroad, China has since refused to adopt "flood like" strong stimulus policies. When the economy was highly impacted in 2020, China remained restrained. The reason the US has adopted such big-scale quantitative easing policies has to do with the fact that its system encourages the pursuit of immediate interests and that current administration does not have to worry about the side effects in the future. However, it doesn't work in China.

In addition, the US dollar enjoys a status of the global currency, and the excessive dollars distributed to the public are easier to disperse outside the US than other currencies. To a certain extent, the world pays for the quantitative easing of the US, which also relieves pressure on the US government when it raises the debt.

But at this rate, the US economy is like a dangerous system under increasing pressure that, according to common sense, is bound to explode sooner or later. It may bring short-term prosperity, helping realize the market rebound last year, but it also puts a huge thunderbolt over its head of as well as the world.

The US has been regarding itself as the world leader, but it is actually creating more risks to the world. The US has been facing a growing number of governance loopholes. Instead of fixing them, it covers them up by printing more money and by playing geopolitical cards. Rather than eliminating risks, it pushes them outward and backward, and that is not a good model for the world to learn from.

By doing so, US monetary policy makes small economies have no way out. Small economies are not able to develop by issuing debt. They use US dollar in much of their business and worry they are being exploited.

In addition, not only the investment sector, but the opinion sphere of the US is so excited about the rapid economic recovery in the first quarter and takes delight in talking about the fact that its economy in the four quarter last year realized positive growth faster than Europe. They seem to have forgotten that the fourth quarter last year and the first quarter this year are the two periods when the most number of Americans died from the COVID-19 pandemic. The economic data which is better than Europe came at the cost of people's lives and health. It is not worth any pride.

The US is a sheer capitalist county where capital interests are at the center of the country's value judgment. Many Americans can get a rescue relief of $1,400 from the $1.9 trillion stimulus plan, but they are not the ultimate goal of this measure. They are just used to facilitate the process of profit-making from capital. This will not change, whether before, during, or after the pandemic.