US elites helplessly safeguarding 'moral high ground' it is losing 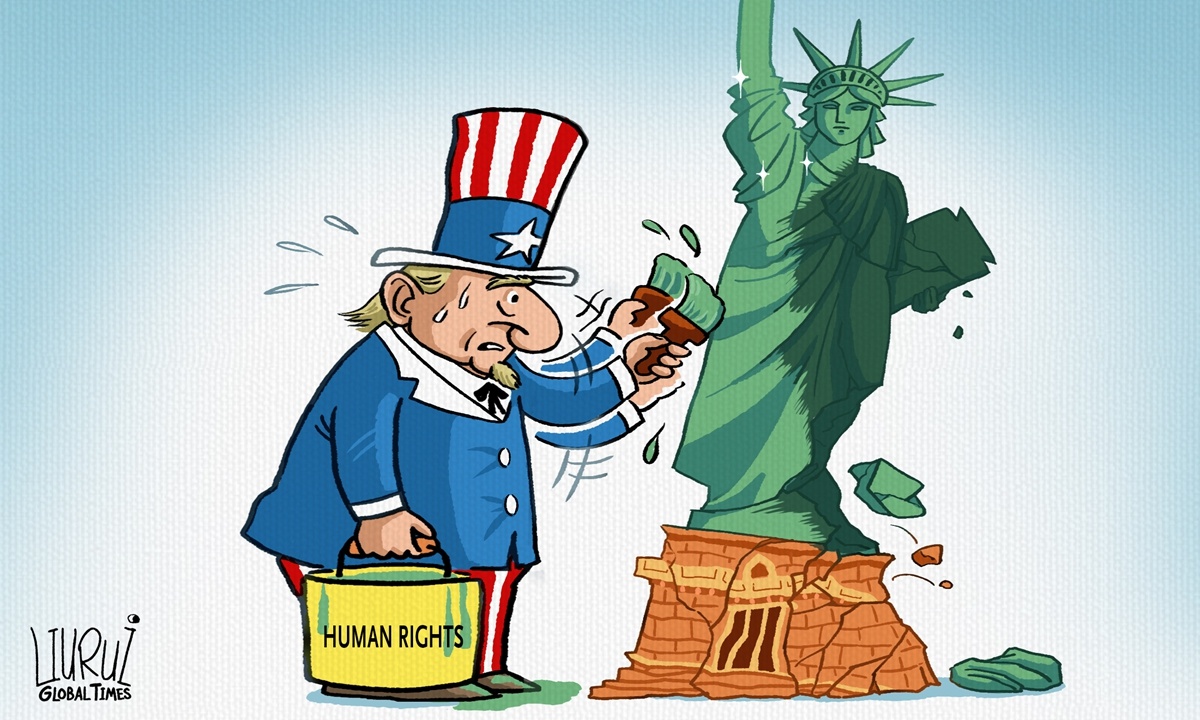 The Hill published an article last week entitled, "Woke progressives must wake up to the China challenge." Shortly after portentously pointing out the US has its "own evils at home," the author devoted most of the words arguing why criticism of China must not stop. If the commentary conveys anything, it is how concerned US elites are about losing the moral high ground to China.

The US has "an inescapably racist and sexist past," Austin Lowe, a Washington-based consultant and analyst, admitted in the article, but his focus swiftly shifted to stressing the US must not "bind our discourse in such a way that we ignore those resulting in the extermination of an entire people." He was talking about the so-called genocide in China's Xinjiang Uygur Autonomous Region, a frequent smear Washington has been launching lately. He also underlined that "Beijing will play host to the Olympic Games in 2022. But somehow none of this is garnering any serious attention by the International Olympic Committee," as well as other Western clichés like China "disappears" those who "dare wage public criticism."

Granted, some American progressives have been openly and straightforwardly discussing the problems in the US, but more US elites and media outlets are becoming increasingly obsessed with something else - beautifying the US' image by showing its willingness to acknowledging its own defects. They are barely sincere in doing so, neither are they ready to right the wrong. They are trying to show there are greater and severer "issues" in China. It is also a call to US progressives - time to focus more on China, not the US, in an attempt to forge a more united anti-China front in the US.

The ongoing reforms and development in China are beyond US recognition and are challenging its imperial mindset and confidence, Xu Liang, an associate professor at the School of International Relations at Beijing International Studies University, told Global Times. Since the US failed to fix social problems, narrow wealth gap, protect people's lives in a public health crisis, or boost their living standards like China did, US elites are losing confidence in their own reforms and development. So they are attempting to hide the facts, helplessly safeguarding the US "moral high ground" by slander, Xu said.

As Lowe hinted, the "genocide" in China, a lie, must be put under scrutiny, while US racism can be touched lightly upon. His article skirted around that after the founding of the US, the country systematically slaughtered native Americans generation after generation, in the name of "civilization." George Floyd's death has further shattered the claim of so-called equality and human rights. Worse, Washington is far from making self-introspection or compensation for its bloody history. All it has done is offering verbal comfort.

It is also hypocritical to clamor for freedom of speech in China while turning a blind eye to a supposedly unthinkable phenomenon in the US - some US elites being labeled as "puppets of Beijing" for objectively introducing China's epidemic prevention and control measures, some American scientists and public health officials being "silenced" by the White House simply for telling the truth about China's fight against COVID-19. "According to the logic of The Hill's article, Americans have only the 'freedom' to attack China, but no 'freedom' to defend China. Such is the nature of US-style freedom, a fake one, which has already set the end from the beginning," Xu said.

The US is losing the qualification to point a finger at other countries about human rights and other individual rights, as it is losing astonishingly high numbers of Americans to gun violence or the coronavirus. Any attack on China's human rights at this time would be tarnishing the concept of "human rights" and turning "human rights" into a tool to serve geopolitics.

The US no longer holds the global moral high ground. This is a fact in international relations. What adjustments will the US make? Will the country reinvigorate its capability to reforms? Unfortunately, the US is stubbornly sticking to the path of scapegoating and framing China. This is eroding the once world's superpower's advantage and motivation to learn, reform and advance.