OPINIONS US-EU deal a short-term ceasefire, not a formal armistice

US-EU deal a short-term ceasefire, not a formal armistice 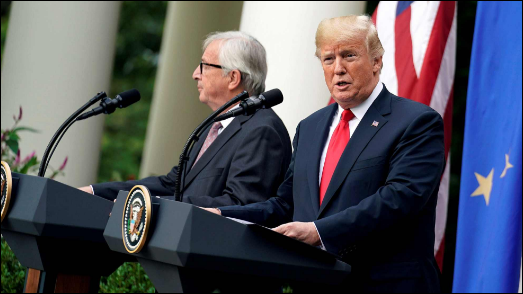 US President Donald Trump and European Commission President Jean-Claude Juncker met with reporters at the White House this week to announce they had reached an agreement to work towards zero tariffs, eliminate trade barriers, stop paying subsidies for non-automotive products, and strengthen energy cooperation. And they agreed to a new round of negotiations to resolve the issue of the American steel and aluminum tariffs, and the European retaliatory tariffs.

But there are some glaring issues with this announcement made in the Rose Garden on Wednesday. The first of these is that there are no timetables, fine details, or mechanisms for implementing this agreement.

Second, the idea of eliminating tariffs in cross-Atlantic trade is not new. During the Obama administration, the United States and the European Union proposed eliminating tariffs on more than 97 percent of imported goods as part of the proposed Transatlantic Trade and Investment Partnership Agreement. But years later, negotiations on this agreement remain stalled. With only four months to go until the US mid-term elections, how likely is it that the Trump administration has the time and patience to realize this ambitious goal?

And third, the European Union is a coalition of 28 member states. The leaders of these countries all need to be brought on board any final agreement. And each of them has their own position when it comes to the trade frictions with the Americans.

There's also the question of whether the Europeans can take the Trump administration at its word. More than two months ago in Washington, the United States and China agreed they would stop increasing tariffs and pull back from starting a trade war. But just 10 days later, the White House announced that it would impose a 25 percent tariff on 50 billion US dollars of imports from China.

This is why The Guardian called into question President Trump's reliability as a deal maker: "US officials have twice come to agreements with China over their trade dispute only for Trump to reject them and threaten to escalate the dispute."

For all of these reasons, some commentators are viewing this week's announcement with caution, seeing it as more of a short-term ceasefire than a formal armistice. This is a prudent position given that on the same day the deal was announced, some of President Trump's senior advisers believed he was on the verge of escalating the trade war with a 25 percent tariff on nearly 200 billion US dollars of imported automobiles, according to The Washington Post. Chad Brown, an economist with the Obama administration, put the problem bluntly when he said: "We could see a tweet in 20 minutes to completely reverse all of this."

And President Trump's zero-tariff proposal sets a neat political trap for the Europeans: If they reject his face-value offer of zero tariffs, they look protectionist, and President Trump can paint himself as a paragon of free trade. If they agree to zero tariffs during negotiations but fail to deliver on their promise, Trump can use this as leverage in future negotiations.

Rather than being concessionary, the European Union should face the American pressure head on and resolutely counterattack. By yielding to the demands of the Trump administration, they might end up giving encouragement to President Trump's "America First" policy, and in turn pay a higher price.