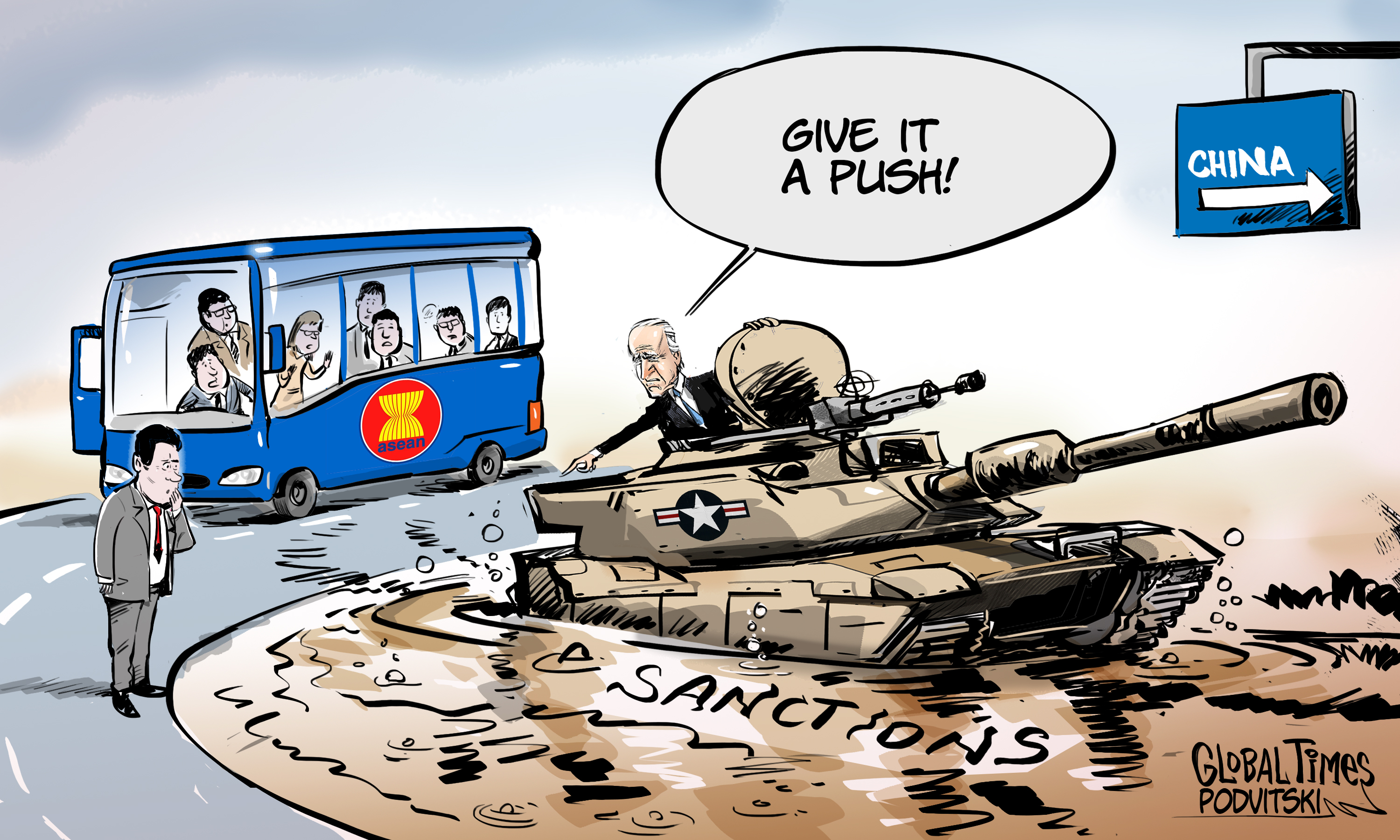 US pulling ASEAN into the quagmire of confronting China. (Photo: GT)

A week ahead of Joe Biden's Asia visit, the US President is hosting Southeast Asian leaders for a summit in Washington to show the importance the US places on ASEAN, but Chinese analysts believe the US' vaunted enhanced ties with the region serve as a part of the Indo-Pacific strategy to secure its global leadership.

Chinese analysts said the Biden administration is likely to announce more investment plans in the region during the summit and release more details of Biden's Indo-Pacific Economic Framework (IPEF) to make up for the shortcomings of Washington's previous engagement with Southeast Asia, which focused only on security and ignored the economy. But analysts said behind the market behavior, the US holds profound political and strategic objectives aimed at forcing countries to decouple from China, which most southeast Asian countries would be cautious of.

Biden will have dinner Thursday evening with leaders from eight ASEAN nations attending the two-day summit, the second US-ASEAN Special Leaders' Summit since 2016 when then-president Barack Obama hosted leaders of the 10-member bloc in California.

According to the US State Department, the ASEAN leaders are scheduled to meet with House Speaker Nancy Pelosi and American business leaders on Thursday afternoon before the dinner with Biden. On Friday, they will meet with US Vice President Kamala Harris, climate envoy John Kerry and other officials to discuss health, pandemic recovery, climate action and sustainable infrastructure.

What's worth noting was that there was no bilateral meeting between Biden and ASEAN leaders. Days ago, Kao Kim Hourn, a minister and close adviser to Cambodia's Prime Minister Hun Sen, said that Biden should spend more time with ASEAN leaders if his administration is serious about elevating ties with the region.

Biden's Indo-Pacific coordinator Kurt Campbell spoke at a think tank on Wednesday of a deep sense in the administration of the need not to be distracted from the Indo-Pacific, and said

China, Myanmar, the Taiwan question and Ukraine would be among the issues discussed, according to Reuters.

In response, Chinese Foreign Ministry spokesperson Zhao Lijian urged the US to honor its political commitment made to China on the Taiwan question and stop politically manipulating it. Zhao said that as a country outside the region, the US should play a positive and constructive role in promoting peace and development in the region, rather than undermining regional peace and stability or forcing countries to pick sides under the guise of cooperation and even playing with fire on issues concerning China's core interests.

The summit takes place ahead of Biden's May 20-24 visit to South Korea and Japan,

in what would be his first trip to Asia since taking office in January last year, and during which he would meet leaders of the Quad countries - Australia, India and Japan. Reuters reported that the Quad countries shared concerns about "China's ambitions to expand its influence" in the region and globally.

Yang Xiyu, a senior research fellow at the China Institute of International Studies, told the Global Times that compared to previous US administrations, the Biden administration apparently places more emphasis on the Indo-Pacific region, requiring all of its allies, even those in Europe, to cooperate with the US and shift their strategic focus to the Indo-Pacific region.

Last month, NATO Secretary General Jens Stoltenberg chimed in, hyping the "China threat" by saying NATO's next Strategic Concept will "for the first time… take into account China's growing influence." He said the bloc will seek to enhance cooperation with "Asia-Pacific partners."

Lü Xiang, an expert on international relations and a research fellow at the Chinese Academy of Social Sciences, told the Global Times that the recent moves of the US showed its determination to make all-out efforts to advance its Indo-Pacific strategy, including tying ASEAN to its chariot.

In this sense, Yang predicted that the Quad will develop into a "Quad plus" and the Australia-UK-US (AUKUS) trilateral security partnership will become "AUKUS plus" to ensure US leadership in the Pacific Ocean and Indian Ocean.

Campbell said there would be "substantial" discussions with ASEAN on technology, education, and infrastructure during the summit.

Several analysts said the US may release more details about its IPEF during the summit to prove its presence in the region.

Dai Fan, vice dean of the School of International Studies at the Guangzhou-based Jinan University, told the Global Times that in the context of China-US strategic competition, the US needs ASEAN more than ever, but ASEAN members were wary of US due to its over-emphasis on politics and security in its engagement with ASEAN. He noted the US is expected to explore more economic cooperation with ASEAN this time to enhance ties with the region.

One prominent feature of the US' Indo-Pacific strategy is to emphasize the construction of regional security and economic rules, and it would tout its IPEF to ASEAN members, analysts said.

Japanese envoy to the United States Koji Tomita said Monday that Biden's IPEF is likely to be formally launched in Japan during Biden's visit, Kyodo News reported. Reuters quoted analysts as saying that only two of the 10 ASEAN countries - Singapore and the Philippines - are expected to be among the initial group to sign up for negotiations under IPEF.

Although IPEF contains a lot of market rules which fit the ASEAN Outlook on the Indo-Pacific proposed by ASEAN, the IPEF is actually embedded in a very deep political and strategic purpose to make it a geo-strategic framework rather than a purely economic framework, Yang said.

"The US is going to use the framework to decouple from China, and will try to lure ASEAN members with the market economy of the IPEF and then force them to choose between China and the US," Yang said, noting that's why ASEAN members do not openly oppose the framework but exercise caution.

A recent surveyjointly conducted by the Global Times Research Center and Center for Chinese Foreign Strategy Studies, Renmin University of China showed that nearly 80 percent of the public surveyed said that the US is the biggest disruptor of the development of China-ASEAN relations.

In response to the IPEF, Zhao Lijian said any Asia-Pacific regional cooperation framework should follow the trend of peaceful development of the times, enhance cooperation, peace and stability among countries in the region, and follow the principles of openness, transparency, inclusiveness and non-interference in internal affairs.

As the US is suffering from the worst economic pressure since the 1970s and its hefty rounds of economic sanctions against Russia over Ukraine crisis has a limited impact on Russia, it would be difficult for the US to implement those plans it would announce during the summit, Lü said.

Through the summit, the US' ulterior motives of trying to lure ASEAN members into an encirclement to trap China will be revealed more obviously, which will only increase ASEAN members' distrust of the US and lower their expectations in cooperation with it, Lü said.