The US administration has adopted a hard-line anti-immigration stance, imposing severe restrictions even on legal immigration and hounding out illegal immigrants. 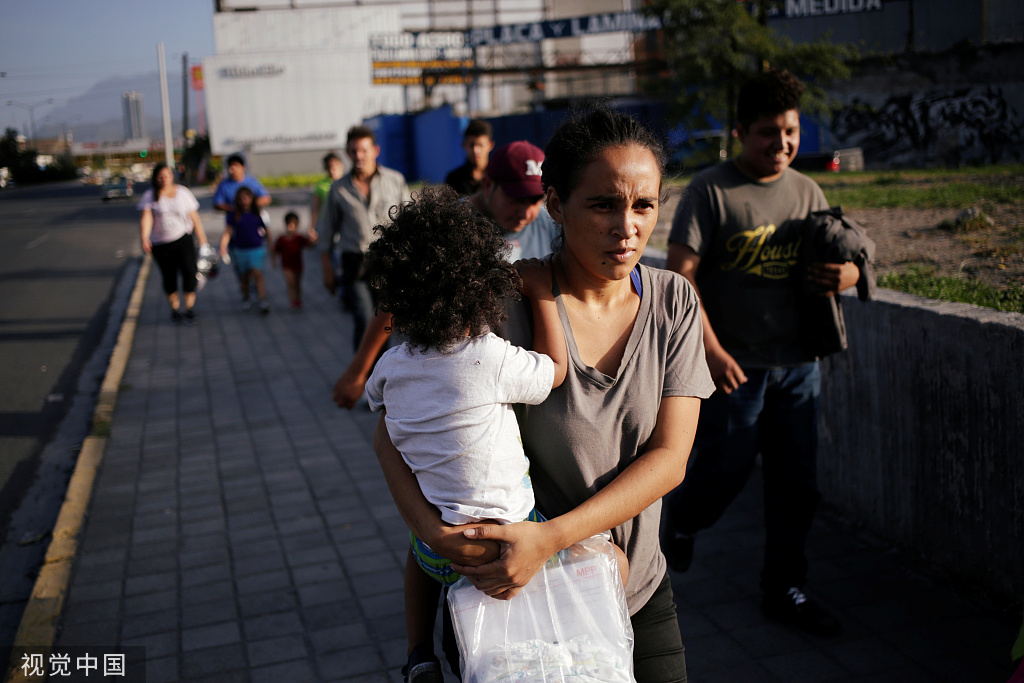 Central American migrants, returned from the US to Nuevo Laredo in Mexico, are seen walking towards a shelter after arriving to Monterrey, Mexico July 31, 2019. (Photo: VCG)

The United States has implemented a string of policy measures to reduce immigration, including but not limited to banning nationals of eight Muslim countries from entering the country, reducing the annual number of H-1B visas (for temporary employment of foreign skilled workers), and enhancing the discretionary power of immigration officers in denying or delaying immigration applications.

It appears that a segment of US citizens harbors strong anti-immigration sentiments and supports the restrictive policies, although the US economy is reaping the benefits of the presence of highly skilled professional immigrants. While Washington has repeatedly claimed that it still welcomes professional and well-educated immigrants, the anti-immigrant climate can have an adverse effect on this group.

This climate might not only discourage potential talents from coming to the US but also prompt those who are currently working in the US to leave the country for other places. As the leaders of many US high-tech businesses have said, any barrier undermining the attraction for international talents can reduce their competitiveness in innovation and technological advancement.

Until the 1960s, the US had limited immigration to whites from Northwestern Europe－not even Italians or Greeks were welcome. After the racial restrictions were lifted, there was a significant inflow of immigrants from all over the world. The immigrants over the past half a century or so have been predominantly non-Europeans and their arrival in some communities has led to incremental resentment among the whites.

Many factors have contributed to the rise of anti-immigrant sentiments in recent decades. While some natives are worried that immigrants are taking away their jobs and depleting the social benefits, many are concerned about the rising share of the non-white population in the country and blame it on recent immigration flows.

It appears the immigrant-native ratio (I-N ratio) is a key factor in the sentiments of the "native" people toward immigration. As the number of immigrants from visibly different ethnic and cultural backgrounds has grown in recent years, the I-N ratio has ramped up, and the attitude of the "natives", who earlier were either in favor of immigration or indifferent to it, is changing because they fear their numerical majority could be threatened.

This concern is also rooted in the "native" group's fear of losing its majority status in the political, cultural and economic spheres.

As a result, immigrant families who initially felt welcomed and accepted are gradually facing rejection, discrimination and hostility. Some American suburbs have undergone a visible transformation by virtue of the rapid influx of high-wealth, highly educated professional families from non-European ethnic groups.

As the number of these visibly different residents in a community increases, the "natives" become more anxious about their "different-looking" neighbors. They try to minimize their interactions with these new neighbors and, as many social scientists have observed, the large number of non-native neighbors could lead to the atomization of these communities. Gone are the days when neighbors knew each other and had occasional, if not frequent, social interactions.

Many don't even know their neighbors

In a typical street in a suburban town, you can find families of Chinese, Indian, Russian, Iranian, Arab and other ethnic groups plus ordinary European-Americans. However, it is rare to see social interactions, such as social gatherings, between two neighbors of different ethnic backgrounds. Many residents don't even know the name of their next-door neighbors. This is happening at the same time when residents are well aware of the growing ethno-isolation. If the ethnic balance of these communities shifts further in favor of new immigrants, the situation is likely to worsen.

The social and political consequences of I-N ratio anxiety among the majority white ethnic group should not be ignored. The anti-immigrant groups frequently play on this ratio anxiety of the majority population to gain support for their "cause" and recruit members.

This ratio anxiety (or the fear of becoming a minority as a result of immigration and higher birth rates among some ethnic communities) has shown a rising trend in European countries and the US since the 1970s, and is increasingly referred to as the "fear of replacement". As a result of the fear, political movements which call for immigration freeze or expulsion of immigrants have become more popular in Europe and North America in recent years.

However, the anti-immigration movement will ultimately lead to repercussions for the US itself, as the immigrants constitute a significant percentage of the US' skilled workforce. Rejecting immigrants will deteriorate the soil for innovation and hamper the US' potential for technological development.

Since the US abolished the Immigration Act of 1924 (which limited the number of immigrants) in 1965, the country has allowed a huge number of global talents to migrate to the country and contribute to its economy. As a result, the US has become the go-to-place for talents in mathematics, biology, pharmaceuticals, computer science and many other fields since the last quarter of the 20th century. A series of high-tech hubs have flourished under this diverse and inclusive atmosphere, which is best exemplified by Silicon Valley.

According to a 2017 report by The Silicon Valley Competitiveness and Innovation Project, 57 percent of the highly skilled workers in the San Francisco Bay area were born outside the US. Another study cited by Senator Spencer Abraham found that between 1973 and 1977, more than 60 percent of the top electrical engineering graduates from the Indian Institute of Technology, Mumbai, migrated to the US. This abundant highly skilled workforce is the key factor that ensured the technological and military dominance of the US in the ensuing decades.

The rise of anti-immigrant sentiments, however, might reduce the supply of science and engineering talents that sustains the US' technological leadership in the world. The US' business leaders openly acknowledge the invaluable contribution of immigrants to the US economy. A group of top business leaders, including Tim Cook, CEO of Apple, and Jamie Dimon, CEO of JPMorgan Chase, appealed to the secretary of homeland security in August 2018: "As the federal government undertakes its legitimate review of immigration rules, it must avoid making changes that disrupt the lives of thousands of law-abiding and skilled employees, and that inflict substantial harm on US competitiveness."

Hence, in the coming years, the US policymakers will have to find a balance between the growing anti-immigration sentiment of a large segment of white voters and the need for skilled immigrants. Ignoring the ratio anxiety and replacement fear of the "natives" might increase their interests in populist and extremist political groups.

This development will not only lead to the victory of populist leaders, but also can create a hostile and intimidating social environment for the immigrant community. Ultimately, it could encourage skilled immigrants to leave the US for more hospitable environments. The alienation and then outflow of skilled immigrants might eventually harm the US economy.

Nader Habibi is a professor of practice in economics of the Middle East, Crown Center for Middle East Studies and Department of Economics, Brandeis University (US). And Hans Yue Zhu is a graduate student at Yale University's Economics Department and a research assistant at the Yale Jackson Institute of Global Affairs.