US faces pressure to increase exports 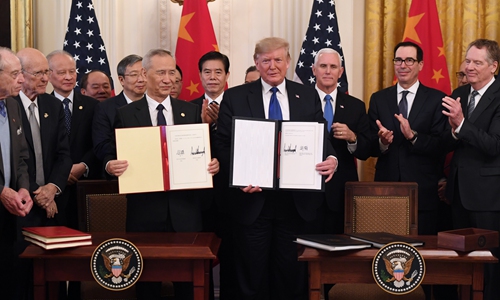 Chinese Vice Premier Liu He and US President Donald Trump show the signed documents after they ink a trade agreement between China and the US in the White House in Washington DC on Wednesday morning (US time). (Photo: AFP)

China promised a $200 billion increase in purchases of US goods and services over two years. China's trade surplus with the US is indeed too large. Much of China's foreign currency has been spent on purchasing US treasury bonds. This is not an ideal trade-financial structure in the long run. Moving toward a trade balance is a healthier direction for China-US economic cooperation.

Because of China's enormous trade surplus, the US has used it as a political weapon against China. Expanding the amount of imports from the US is a process to dismantle this weapon. The increase in Chinese imports from the US means that more weapons to counter the US will be held in our hands.

In the past, China imported more than $20 billion worth of agricultural products from the US in one year. When China suspended purchasing those goods, it exerted great political pressure on the US. When China's purchase of these items reaches over $40 billion, the US will be further tied up.

China needs to work hard to implement the additional $200 billion in imports from the US in the next two more years. The US should also cooperate fully to provide products that the Chinese market really needs and are competitive in price.

China is already a market economy. Most import companies are private, and many are foreign-funded. The Chinese government cannot give orders to these companies. In addition, consumers will not buy products out of political considerations. The US is clear about all of these facts.

If the US sells its products by force, and the Chinese government buys useless products, then high-quality products from other markets such as Europe, Japan and Southeast Asia are squeezed out of the Chinese market. This would violate the WTO rules.

Therefore, substantially increasing China's imports of US goods can be a greater challenge to the US than to China. If US companies cannot deal with the challenge, US President Donald Trump's negotiating team will not save them.

Others are worried that China's economic growth is slowing down. So, where can the country find the market after expanding imports? This is the point which China needs to push itself. As long as it can further expand its consumer market, with its economy performing in a normal way, it can accommodate these expanded imports. The yuan will likely gain against the dollar in the next two years. This will make it easier for China to expand imports from the US.

The phase one trade deal is consistent with the general direction of China's reform and opening-up. The deal promotes a China-US trade balance, strengthens intellectual property protection and creates a more favorable environment for external investment, which are the directions that China must stick to during its opening-up process. The trade war is pressure, but we should try to turn it into a driving force to comprehensively deepen our reform and opening-up.

Some argue that China should have accepted all the US conditions from the very beginning. This is naïve.

During the 22 months of the trade war, China responded to the US attempt to make China give up high-tech development and made the US understand that China is not the one to be trifled with. Neither the EU nor Japan has the courage and ability to compete with the US. This will increase US expectations that China will fight back when faced with radical US policies against China.

China, at such a strategic position, is doomed to face difficulties. We should wisely and firmly deal with the uncertain China-US relations.