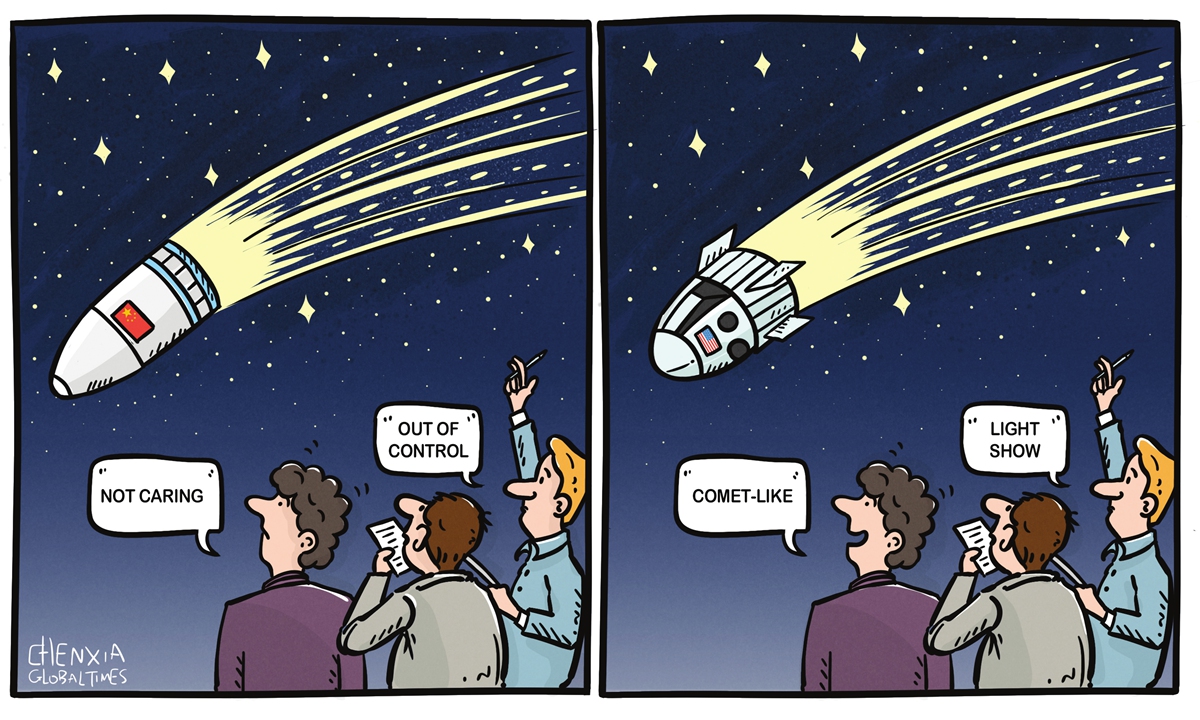 Debris from China's Long March-5B Y2 carrier rocket landed in the Indian Ocean at 10:24 am Beijing time, west of the Maldives archipelago. Some US authorities and media outlets previously smeared that China's rocket debris was falling back to Earth "in an uncontrolled re-entry" and that China was "irresponsible." Their hype and smears were in vain.

In the past few days, some US scientists and even NASA have acted against their conscience, describing how "dangerous" the rocket debris is and how "China is failing to meet responsible standards." The US media has been hyping how the debris was "falling out of control," as if the behemoth is more likely to hit densely populated areas than the wreckage of rockets launched by the US. This is shameless hype. A few US scientists have participated in discrediting China's aerospace industry, which is a kind of degradation.

Here are some important facts: The landing points for the rocket debris have gone under estimation and calculation, and there is no complete control of how rocket debris deorbits and falls back to Earth. There is also no evidence proving that the landing points of US rocket debris are more controllable compared with those of China's. In March, a piece of debris from a SpaceX rocket fell onto a farm in Washington state, which is one of the closest examples of rocket debris that had the potential to cause damage.

Unless a rocket is fully recycled after its launch, there will always be some uncontrollable factors. As far as we know, China is stepping up research on the recovery technology of rockets after launch. The upper stage of the Long March-5B Y2 rocket has been deactivated, which means that most of its parts will burn up upon reentry, making it extremely unlikely there will be damage to ground facilities. Besides, the ocean covers more than 70 percent of Earth's surface, and there are many uninhabited areas on land. During the nearly 60 years of space activities, the calculated fall of rocket debris has not caused casualties so far. In addition, the risks of falling rocket debris are the same, no matter whose rocket it is. It is seriously anti-intellectual to claim that China's rocket debris is especially risky.

Through the US' hype about the Chinese rocket, Chinese people and those in the international community who understand the common sense of space launches once again realize the collective petty-mindedness of some US elites. These people are jealous of China's rapid progress in space technology. They cannot stand the fact that in several years there will be only Chinese space station in orbit. Some of these people even try to use the noises they made to obstruct and interfere with China's future intensive launches for the construction of its space station. They criticize China to give vent to their emotions, and at the same time, try to implement their evil plans.

China is faced with the US that is particularly afraid of the progress of others, even though its competitiveness has declined compared to the past. However, Washington still controls some of the loudest "loudspeakers" in the world. These "loudspeakers" can smear China and lead others to do so. They disguise their selfishness and unreasonable demands as some kind of international justice. This is not only a problem for China, but also a challenge for humankind as a whole.

It is foreseeable that Washington will keep nitpicking and discrediting Beijing over the construction of space station.

China needs to take action in this regard. We need to release more information actively, and communicate with the global community in time and balance the mud thrown at Beijing by Washington as much as possible. And we should just ignore the noises that we cannot block. China will go on working hard in our fields, while the US chirps like a cricket with its little fellows.

Beijing's future launches for space station construction cannot be delayed. Other launches need to be carried out as planned. China has no obligation to please public opinion in the US and other Western countries in the field of space, nor in other areas. Beijing's actions accord with international rules and its rights. Washington and its allies do not have the right to judge it. The most correct attitude toward their incessant pestering is to despise their behavior.