While some positive signs emerged for further China-US trade talks as the US softens its stance on Huawei, insiders suggested that the goodwill of Washington may win more time for the Chinese technology giant to restructure and develop its business. 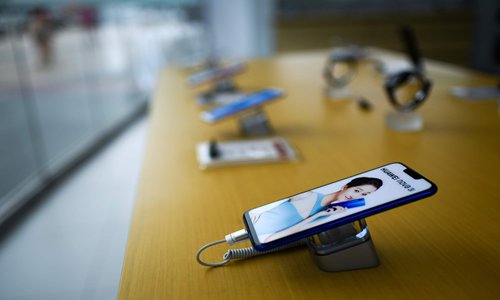 Huawei smartphones are displayed at a Huawei store in Beijing. (File photo: VCG)

The Trump administration is expected to offer timely licenses to allow US companies to sell equipment to Huawei as long as it does not pose any national security threat, after the US president met with a group of business representatives on Monday.

US President Donald Trump told executives of several major technology companies including Google, Intel and Broadcom on Monday that the government would make timely decisions about whether to allow companies to sell components to Huawei, according to media reports. The US technology industry has been lobbying the government and voicing support for the resumption of sales to the Chinese company.

Since Washington imposed the ban in mid-May, which restricted companies like Google from cooperating with Huawei, the move put the US companies in a dilemma as they might lose share in the Chinese market if Huawei, along with other Chinese companies, stops using the Android systems as tensions continue to escalate.

While companies have been forced to take sides amid the China-US technology cold war, the meeting between the top leaders of the two countries at the G20 summit last month in Japan became a turning point for the Huawei sanctions, as Trump promised to lift the ban as one of the preconditions for reaching a trade deal between the two countries.

"To issue timely licenses will play a positive role as it will ensure that Huawei will not face a supply cut-off in the short term, helping gain more time for it to restructure its business," Xiang Ligang, director-general of the Beijing-based Information Consumption Alliance, told the Global Times on Tuesday.

"Huawei has been preparing for the worst-case scenario for some years and now it is equipped with the capacity to design and produce chipsets such as the Balong 5000," he said.

Huawei had not made any comment on the latest progress from the US side as of press time on Tuesday. However, the company is unlikely to depend on the goodwill of Washington for its long-term survival, as it has been actively diversifying its supply chain strategy in recent months.

Some of its senior executives have also reiterated their confidence about the business' continuity, particularly when facing growing geopolitical pressure from the US.

For instance, its chipset division, HiSilicon, can now ensure supplies to major Huawei products such as smartphones.

Its Balong 5000 chipset has also passed all the network tests and can now operate in both standalone and non-standalone 5G-network environments.

It will also invest 3 billion yuan ($436 million) in the next five years on its ARM-based server CPU Kunpeng to enrich its own ecosystem, Xu Zhijun, rotating chair of Huawei, told an industry conference on Tuesday.

A source close to Huawei told the Global Times on Tuesday that the company has noticed the US' easing stance on this matter but it will still concentrate on its own core technology and business development in case the US policies change from one day to another.

"It can't always follow the steps of the US government. The firm has its own rhythm in doing business," the source said.

With leading technology companies in the US showing support for Huawei exemptions, some major chipset makers, which are also suppliers of the Chinese company, have been suffering from the sanctions, as they have all lowered their revenue forecasts, the Wall Street Journal said on Monday.

The US ban has hurt local employment and the interests of local telecom carriers.

Due to the export controls, Futurewei — Huawei's research and development subsidiary in US — announced layoffs covering more than 600 local positions, Huawei said in a statement sent to the Global Times on Tuesday.

While US employees are losing their jobs because of the US-led geopolitical crackdown on Huawei, some US companies have been reportedly bypassing the ban through different means to sell products to Huawei.

Although US companies support lifting the ban on Huawei, they also agree with national security restrictions, which may become a major hurdle in the Huawei exemption. "If the US insists on banning Huawei, it will eventually be Washington that has to pay the cost, as that's the moment it falls behind. The Chinese company will thrive with the support of its technologies and the market," Xiang said.