OPINIONS US grounds drones that can help fight California fires

US grounds drones that can help fight California fires 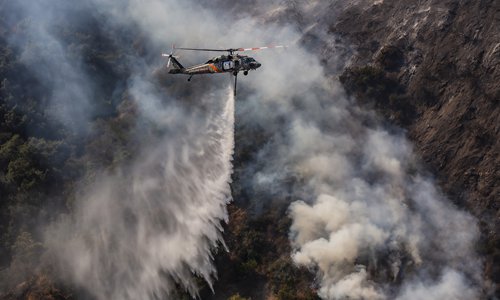 The raging wildfire in California is unveiling a systemic problem in the US. Reports show that thousands of people are under evacuation orders, that power cuts have left about a million people in the dark and this is not yet the end. How can a country, the only superpower in the world, and California, one of the wealthiest states in the US, seem helpless in the face of a natural disaster?

"The portion of California that burns from wildfires every year has increased more than five-fold since 1972," according to Business Insider. Just because it happens every year, does that mean people should accept that this is what living in California will be about?

The US Department of the Interior (DOI) could have done a lot to stop California wildfires from worsening. On the department's home page, one can clearly see one of its main responsibilities is to address challenges including natural hazards. Unfortunately, updates or solutions for the latest fire can hardly be found in DOI's recent press release.

Worse, the accountability system in the US is scarcely mentioned after the fires broke out. If the same catastrophe occurred in China, ministers might be up to their neck to address the crisis and non-ideal performance might even lead to them stepping down from their position.

What is the US DOI busy doing? It announced that all drones in its fleet that were manufactured in China or that contained Chinese-made parts would be grounded on Wednesday, reported the New York Times. But it added the decision will not apply to drones "currently being utilized for emergency purposes, such as fighting wildfires, search and rescue, and dealing with natural disasters that may threaten life or property." Obviously the US is well aware that when it comes to unmanned aircraft, especially in the sector of disaster relief, it can hardly find any alternative to Chinese products.

But whatever the case, the move showed DOI's inadequate work focus. When fires in California are still burning, it seemed not too concerned about the disaster or the fact that California's electric infrastructure is decades old. US President Donald Trump has threatened to cut millions of firefighting assistance payments from fire departments in California. California, home to quite a few world-leading high-tech companies, is using the lowest tech solution to fight the fires - a power cut. The US is taking measures to find fault with China and pile pressure on "Made in China" products. Isn't that a problem with the US system?

The behavior can only be comprehended as the mentality of a declining empire. Fear often emerges when a superpower falls. Yet instead of reforming their own systems, they tend to ponder only about what tricks to play to defeat their rivals.

The US still remains the most powerful country in the world, but it is in crisis. A majority of Americans believe that the US is declining. Is China to be blamed for that?

Washington is wrong. The No.1 enemy of the US is its own problems and containing China won't save it. Yet in spending too many resources and energy on containing China, it will surely decline.

It is not too late now for the US to figure it out.