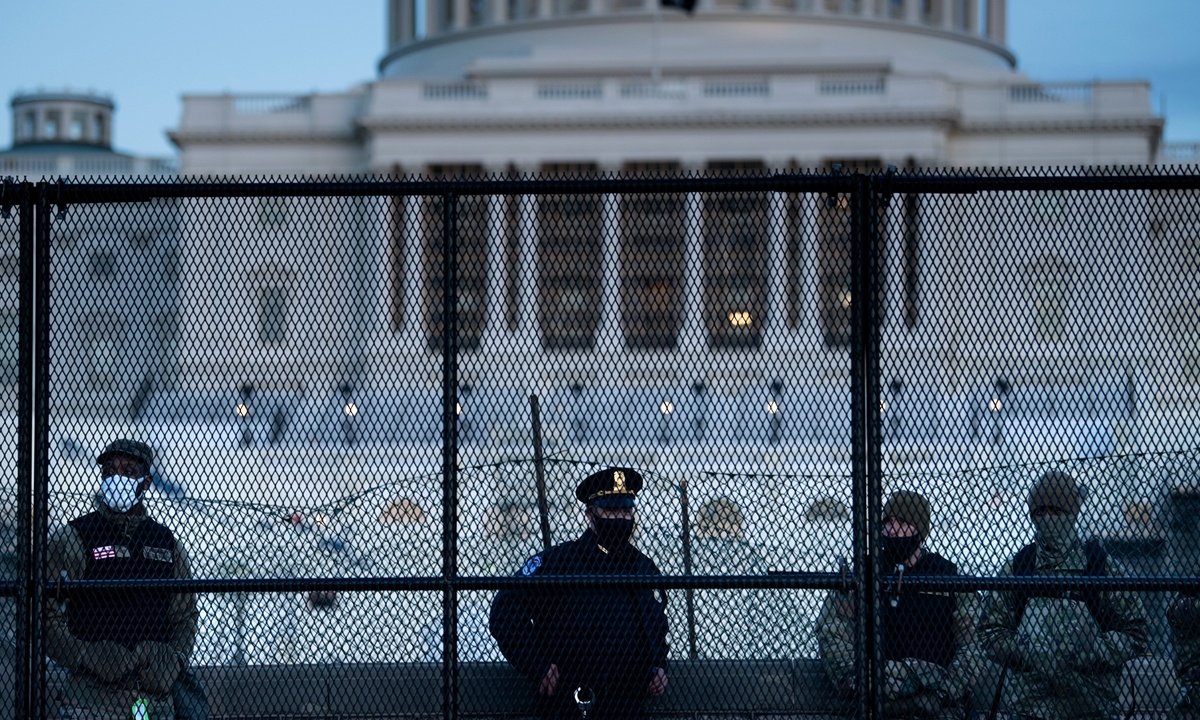 A Capitol police officer stands with members of the National Guard behind a crowd control fence surrounding Capitol Hill a day after a pro-Trump mob broke into the US Capitol on Thursday in Washington, DC. (Photo: AFP)

The US has really blown it, not just the Trump administration, but the whole of the US. Trump supporters stormed the Capitol, which was shocking. Social media platforms including Twitter suspended Trump's account, and triggered controversies over freedom of speech. This is more shocking. Trump's followers gathered on social networking platform Parler, which was later banned by three US internet giants. This is especially shocking. The US is gradually doing exactly the same thing it once condemned what other countries did. It will be hard to dress itself as a global beacon of democracy again.

Some US elites voiced angrily that this is China's "victory.�?They put it as if Americans no longer have their value criteria and start to judge whether the US is right or wrong based on whether Chinese people are happy or not.

Chinese people should never learn from the US in this regard. We must constantly improve and strengthen our independent judgment. Everything we do should go in line with the realities of China. Whether we have made China a better place is the only criterion on whether we have done the right thing. Whether Americans are happy, whether they hitched a free ride or suffered losses are not important at all.

This is what China has done these years. Our value system is independent and complete, and is basically immune to external opinions. We need to stick to it.

I hope and believe recent behavior of the US will not affect China. They suspended Trump's account on social media platforms, and banned Parler. Those moves will not have any exemplary effect on Chinese society. We won't take US actions as excuses to expand our internet regulation. China will continue to maintain our relevant regulations and guiding principles, maintaining its internet public opinion order which is based on the law. But it will also safeguard freedom of expression and explore the best relationship between the law and freedom under China's national conditions, enhancing the diverse ecology of the Chinese public opinion field.

The chaos in the US has boosted the confidence of many Chinese people in the country's development path. We know that China will get increasingly better. Our society has both realism and idealism. Stability, balance, and yearning for better are all vital genes of Chinese culture. We will surely be able to make the Chinese path, our greatest creation of the 21st century, brilliant and glowing.