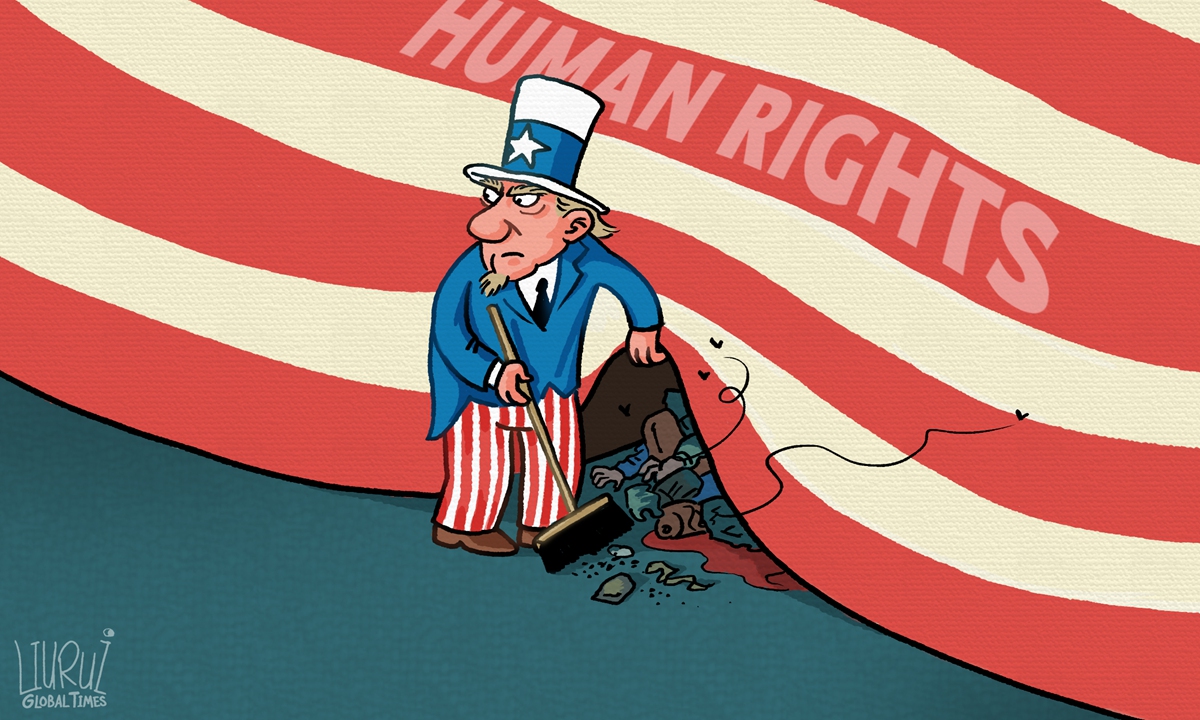 Look, Uncle Sam is busy cleaning up its own mess on human rights problems. Does the US still think it's the beacon of human rights? (Illustration: Global Times)

US President Donald Trump on Wednesday signed a bill that seeks to punish China for alleged human rights abuses against the Uygur Muslim population in the country, at a time when systematic discrimination against minorities in the US, particularly African Americans, has sparked extensive unrest.

The US has fallen from the moral high ground as a self-proclaimed human rights defender. It's time for the international community to scrutinize the deplorable US human rights situation.

Fifty-four African countries called for a UN inquiry into "systemic racism" and "police brutality" in the US with the aim of defending the rights of people of African descent, Reuters reported Tuesday. At the request of the African countries, the UN Human Rights Council in Geneva held a rare urgent debate Wednesday on human rights in the US, during which the brother of George Floyd backed the call of the African countries, appealing to the UN to help "get justice" for his brother.

Only weeks after the death of Floyd sparked nationwide unrest, another black American, Rayshard Brooks, was shot and killed by Atlanta police in what was called an unjustified use of deadly force.

Does the US political system have the capacity to correct itself in addressing this age-old issue? And who should be held accountable for the sorry situation of the disadvantaged groups in the US?

US politicians are keen on using the human rights issue as a tool against rival countries, but turn a blind eye to domestic woes. Trump's top economic adviser, Larry Kudlow, refused to admit that systemic racism exists in the US. If the US cannot face up to its own problems, it's imperative for the international community to step in, for example, setting up a special committee and starting an inquiry. China's top legislature could also consider passing a "George Floyd human rights bill" to send the US a message, urging it to step up human rights protection.

The Uygur bill was put forward by Florida Senator Marco Rubio. Shouldn't Rubio at least meet Floyd's family and listen to them before preaching on human rights before other countries? Trump reportedly said during a call with state governors in early June that the initial response in Minnesota to protests triggered by the death of Floyd was "weak and pathetic" and called the state a "laughingstock all over the world." What is really a laughing stock is the US own human rights record, and the country's practice of using human rights as a political tool against others.

Molly Montgomery, a former US Foreign Service officer whose postings included Afghanistan and Bosnia-Herzegovina, said US diplomats accustomed to "expressing concerns" on other countries' "human rights abuses" are now being asked by foreign governments to explain the US' human rights problems. US diplomats are now embarrassed to continue promoting human rights in foreign countries. It's time for US politicians to look to themselves.