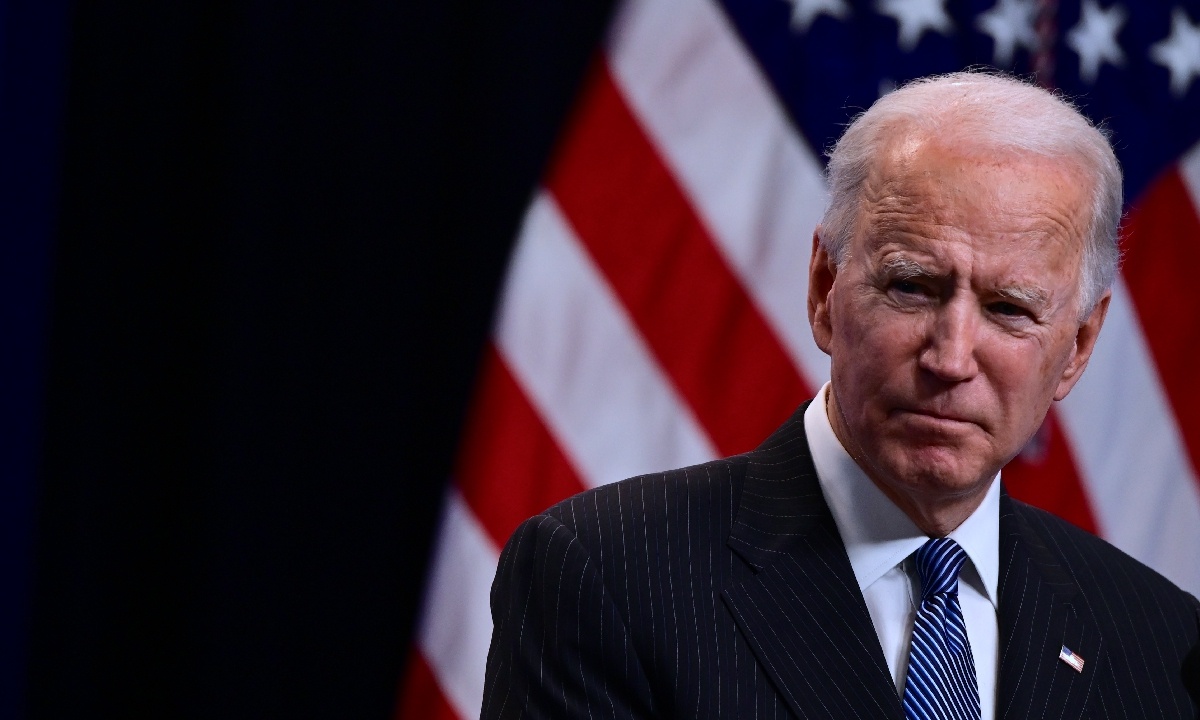 US President Joe Biden answers questions from the media after signing a "Made in America" Executive Order in the South Court Auditorium at the White House on January 25, 2021 in Washington. (Photo: AFP)

The late renowned US geopolitical thinker Zbigniew Brzezinski made an insightful and exclusive analysis of geopolitical patterns in his famous book The Grand Chessboard: American Primacy and Its Geostrategic Imperatives.

Many of his judgments still have vitality today. Brzezinski pointed out in his book that "Potentially, the most dangerous scenario would be a grand coalition of China, Russia, and perhaps Iran, an 'antihegemonic' coalition united not by ideology but by complementary grievances." His warnings against US diplomacy have once again garnered much attention in recent days.

Whereas US relations with China, Russia and Iran have, to varying degrees, fallen into tensions, the latter three countries have made new progresses in developing relations among them. This pattern has made some media outlets and analysts believe that Brzezinski's prediction is now becoming a reality.

However, if we look deeper into Brzezinski's point of view, perhaps we shouldn't focus too much on whether it has, or will, come true or not. Brzezinski himself held onto the belief that such "contingency" was remote. In fact, what he really wanted to convey by issuing such a warning is that the US shouldn't make enemies everywhere and bring ruin upon itself.

In the 1990s, the US was immersed in the dream of pursuing "unipolar hegemony." Against this backdrop, Brzezinski put forward such prudent judgment and advice to the US policymakers. This shows his capability. Unfortunately, since he published his analysis more than two decades ago, US diplomacy has been walking along the track of self-centeredness — especially as "America First."

For example, president Bill Clinton promoted democracy across the world. George W. Bush recklessly waged wars in the name of countering terrorism. Barack Obama used his presidency to redefine "American exceptionalism." Donald Trump attempted to reconstruct US hegemony by disruptive means. The US never seems to have a deep, accurate assessment of the real world in which it is a part. It does not seem to know what role it is supposed to play. This country lives in a world of its own imagination.

When Joe Biden took office, there was much talk that "America is back," and that "diplomacy is back at the center of [US'] foreign policy." We've heard that the "alliance of democracies" would lead the world again.

These loud but empty slogans still ignore the fast-changing nature of world politics revealed by the COVID-19 pandemic. The US may want to come back, but is the world willing or able to go back to the times when the US could rally multitudes at its calls? If a global poll were conducted, the answer to that question would probably not satisfy the US.

With the foreign policy of the new administration, it is obvious that the traces of American bullying are still evident. The US has alleged to see "a stiff competition with China," to unite like-minded allies and partners and to hold China accountable on a variety of issues by building a position of strength.

The US President ignored diplomatic protocols and called the Russian leader a "killer." This was a personal attack that is not helpful to bilateral relations — not now and not at any time. The US has declared to come back into compliance with the Iran nuclear deal. But it only mentions the obligations for Iran to dismantle some of its nuclear equipment, rather than the US' responsibility to lift sanctions. The US has failed to show due respect for a sovereign state.

Faced with the development of friendly, non-aligned interstate relations between China, Russia and Iran, the US is once again suffering from its delusions of persecution. It went back to its old ways of looking for enemies and trying to tie the entire West to its chariot against non-Western countries. Regardless of the development of the trilateral relations, Washington should realize that the time when the US could confront several countries at the same time has long passed.

This Cold War mentality no longer meets the current reality.

As Brzezinski argued, in the long run, global politics is destined to become increasingly incompatible with a situation in which one country has exclusive hegemonic power. Thus, the US is not only the first and only truly global superpower. But it may well be the last as well. The US government should perhaps listen more often to such honest advice, though they may be unpleasant to hear.

In addition to dealing with the pandemic and recovering the US economy, the Biden administration needs to thoroughly rethink the US foreign policy and give up illusions of hegemony. Washington needs to think seriously about how to treat other countries in the world as equals and live together peacefully. It also needs to try to be a normal member of the international community instead of an exceptional, American-style leader.