US, India 2+2 meet an ‘all-for-itself’ opportunity 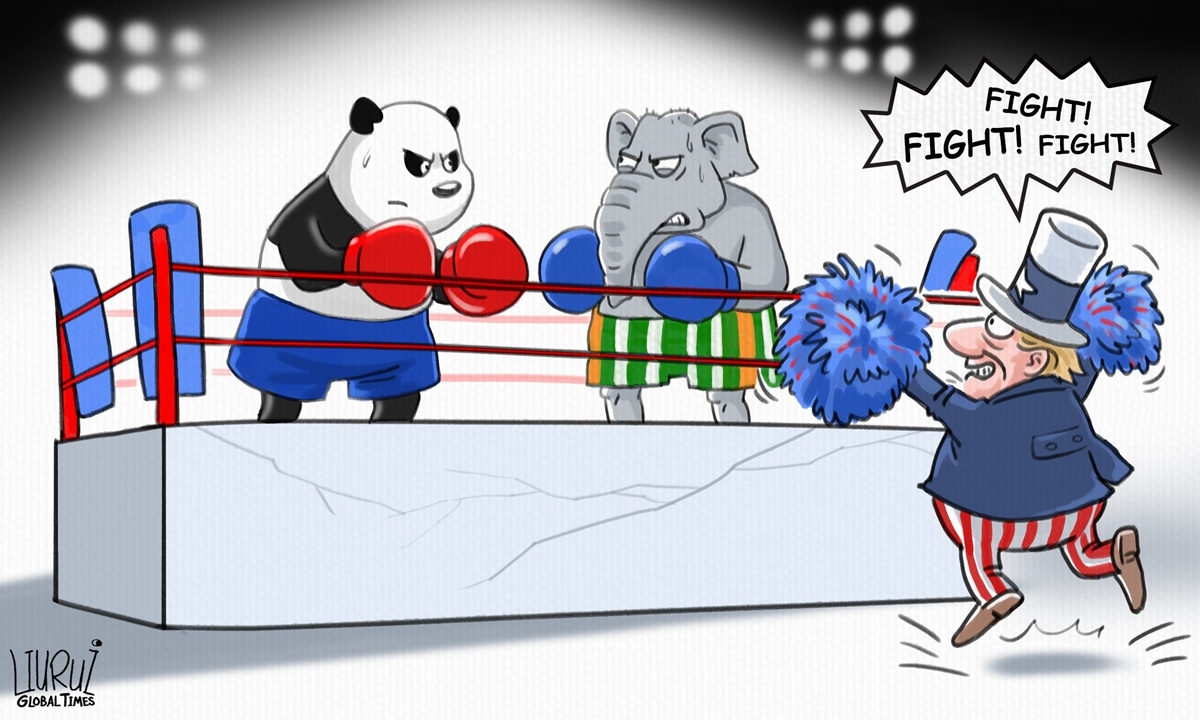 Coming at a sensitive time with the US Presidential election just a week away and while India is still entangled in border tensions with China, Chinese observers said Tuesday's third 2+2 ministerial dialogue between New Delhi and Washington is more an opportunity for both countries to preen for their own benefits rather than a substantive occasion which will have lasting benefits.

The Trump administration wants to use it as a fillip for his reelection, and India to  flex its muscles to China rather than as a factual consolidation of diplomatic and security ties, as many foreign media have hyped, observers said.

Despite a firestorm of positive signals fired off by officials from both sides in an attempt to lighten the atmosphere before this year's ministerial meeting, such as the signing of the Basic Exchange and Cooperation Agreement for Geo-Spatial Cooperation (BECA), Chinese observers pointed out that even upgraded military cooperation with the US will not put India on the same level to confront China, nor will it change the fact that Washington and New Delhi always have their own interests at heart. It will not determine how long the India-US honeymoon will last.

The third India-US 2+2 Ministerial Dialogue will be held in New Delhi on Tuesday, with India hosting the meet.

International media, including Reuters, claimed that during the dialogue, India is likely to sign the BECA for geospatial cooperation with the US.

Although the Indian MEA denied that the timing of the visit of senior US officials exactly one week before the US elections on November 3 was unusual, Chinese observers beg to differ.

Arranged as the last high-profile diplomatic event just days before the US elections, the trip shows that the Trump administration attaches great importance to the meeting, as it highlights the "Indo-Pacific" strategy. This is deemed by Trump as his most significant diplomatic achievement since he took office, Qian Feng, director of the research department at the National Strategy Institute at Tsinghua University, told the Global Times.

Qian noted that Trump is also eyeing the India visit as a chance to boost his reelection hopes in a tight race. A breakthrough in Indo-Pacific relations, such as signing the BECA and upgrading US' friendship with India to counter China, would be cases in point.

Pompeo, speaking to media in Washington ahead of his trip, said he was "sure that my meetings will also include discussions on how free nations can work together to thwart threats posed by the Chinese Communist Party."

For the Indian side, border tensions with China since June have exerted a heavy toll to India's ego, and confronted New Delhi with the huge gap between China and India's defense systems, according to Qian.

Signing the BECA with the US will enable India to share US high-end satellite images and telecom interception results to improve the accuracy of its own equipment, Qian said.

In the last two US-India meetings, agreements known as LEMOA and COMCASA were signed. Chinese experts said that signing the BECA, which would enable Washington and New Delhi to share classified military information, military facilities, highly sensitive communication equipment and geospatial maps, signals that bilateral defense relations will be upgraded to the "would-be ally" level.

Wang Se, an assistant professor at the Institute of South Asian Studies of the China Institute of Contemporary International Relations, noted that internet security and anti-epidemic cooperation would also be an important topic. In June, India banned nearly 60 Chinese mobile apps, including TikTok, citing national security concerns, a move followed by the US.

Wang predicted that in the long term, India-US ties will be deepened, especially in the military field, but they will not form a traditional alliance like the one between the US and Japan as the purpose of the US wooing India is to serve its global strategy, not to make India stronger.

Although the BECA signing, if it happens, would elevate US-India military cooperation to next level, Chinese experts doubt the pact's effectiveness, denouncing it as all talk, but little substance.

India's defense system lags behind that of China's in many aspects which cannot be make up by the BECA alone, said Qian, noting that similar military cooperation between India and the US occurred after the 1962 China-India War, but it did not play a significant role for China, which at that time was relatively economically and militarily struggling, never mind the advanced China of today.

By pushing forward the pact, the US also wants to peddle military equipment to India, the Tsinghua expert said, pointing out that the US had tried to sell F-21 fighter jets to India last year, which New Delhi did not buy presumably because the F-21 resembles the F-16 and is seen as just a rebranded version of the fighter. "And India, with its incompatible military equipment imported from many other countries, cannot afford large purchases of US arms," Qian said.

Meanwhile, India will never forsake its fundamental principle of nonalignment as the country has never wanted to be an accomplice of the US, but has always strived to be a leader in South Asia, Wang noted.

Analysts pointed out that India's interactions with Russia have been a bump in the road that has affected US trust in the country. In October, US Assistant Secretary of State Clarke Cooper once again cautioned India against going ahead with the procurement of S-400 missile defense systems and other armaments from Russia.

A US federal law, the Countering America's Adversaries through Sanction Act, imposes sanctions on countries that engage in defense and intelligence transactions with Iran, North Korea and Russia.

"India should have clear awareness of the need to maintain its strategic autonomy. Although the US shows it is willing to reach a high strategic consensus on defense, the country will never allow its jobs and core technologies to be transferred to India," Wang said.

Qian pointed out that after the result of US election is known, it will have a huge impact on the country's subsequent diplomatic ties and focus. "How long the honeymoon between India and the US will be maintained remains a question," Qian said.