OPINIONS US, India to remain strange bedfellows regardless of any military pact

US, India to remain strange bedfellows regardless of any military pact 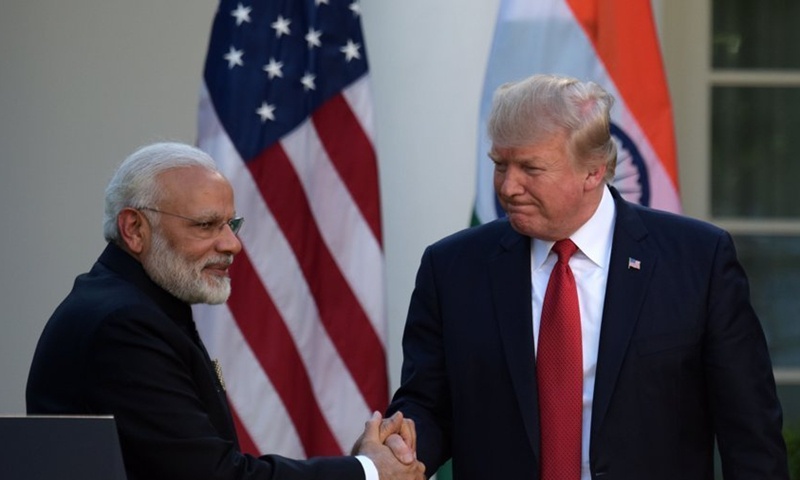 With over 10 days before the US-India 2+2 Ministerial Dialogue between the foreign and defense ministers of the two sides, which will reportedly take place on October 26 and 27, some Indian media outlets have already started hyping up a deal to be signed – the Basic Exchange and Cooperation Agreement (BECA) for geo-spatial cooperation. They have a reason to cheer – the signing of the deal would mean the establishment of a basic military alliance between them.

“Later this month India and the US are set to sign the BECA,” the Times of India reported on Friday, adding it can be a game-changer for China-India border row.

October has and will witness frequent high-level interactions between India and the US. Ahead of the 2+2 dialogue, US Deputy Secretary of State Stephen Biegun will visit India from October 12 to 14. And on October 6, US Secretary of State Mike Pompeo just met with Indian Minister of External Affairs S. Jaishankar in Tokyo.

Both countries are leveraging each other’s strengths through constant interactions within such a short period of time. The US is willing to see tensions between China and India, with the Trump administration hoping to win more votes in November election by drawing India to its side. New Delhi, on the other hand, hopes to showcase its military muscle to China, flaunting the importance by US connections. Essentially, India has revealed that it fears China may literally launch a war against it.

While India is displaying its military might in a high-profile manner, its tone over China-related issues were relatively low-key during Tokyo’s foreign ministers’ meeting among the US, Australia, India and Japan – so-called Quad (Quadrilateral Security Dialogue) countries.

As a saying goes, a biting dog doesn’t bark. India is, as a matter of fact, making genuine efforts to institutionalize US-India military cooperation by pretending to keep a low profile in its diplomatic rhetoric. Take the BECA for example. With the new agreement, India could boost the accuracy of its weapons such as cruise and ballistic missiles. It couldn’t be more obvious that the move is aimed at China.

In the meantime, India is also striking a balance by not acknowledging the title of being an US ally. Amid rising border tensions with China earlier this year, India reportedly planned to invite Australia to join the annual Malabar naval exercise that has included only the US, India and Japan. Yet so far, there has been no official invitation. If Australia joins the drill this year, it would signal that the Quad military alliance is officially formed. Yet such an alliance will be a far cry from the NATO, in which an attack against one ally is considered as an attack against all allies.

India is very hesitant to form a real military alliance with the US. Its goal to institutionalize ties with the US and Quad alliance is not only to build a coalition of the willing against China, but also to grow its own economy. India’s withdrawal from the Regional Comprehensive Economic Partnership shows that it does not want to join a China-centered industrial chain, but hopes to establish a new chain in which it could replace China’s role. It wishes to gain support from the US and Quad members in this respect. But the aim will be very hard to achieve.

China’s current status in the global industrial chain is the result of decades of reform and opening-up as well as the natural selection in economic world. It cannot change with the snap of a finger just because India wants so.

The manufacturing of certain industrial sectors is shifting out of China. That is because China’s productivity and production costs are rising as the country is climbing toward the upstream of the global industrial and value chain. At the same time, companies which relocate their Chinese factories elsewhere mostly head to Southeast Asia, rather than India, because Indian business environment is simply too awful.

From the perspective of the US, it will continue to keep the wide gap with India in terms of weapon technologies, even if it has signed a growing number of defense pacts with India. In the eyes of the US, India is a pawn, even a cannon folder. Washington would never help make India strong, turning it into another challenger. The BECA may be signed, yet there will be lengthy follow-up negotiations over in what circumstances will the two sides take joint actions.

India is not stupid. Being an US ally comes with a price. That is why it has no interest in forming a real alliance with the US. It wishes to get advantages while escaping from getting involved in possible conflicts between China and the US. In the end, Washington and New Delhi are merely strange bedfellows, no matter how many defense pacts they sign.

The author is secretary-general of the Research Center for China-South Asia Cooperation at Shanghai Institutes for International Studies, a visiting fellow of the Chongyang Institute for Financial Studies, Renmin University of China, and a distinguished fellow of the China (Kunming) South Asia & Southeast Asia Institute. opinion@globaltimes.com.cn