US 'Indo-Pacific' strategy lethal for region 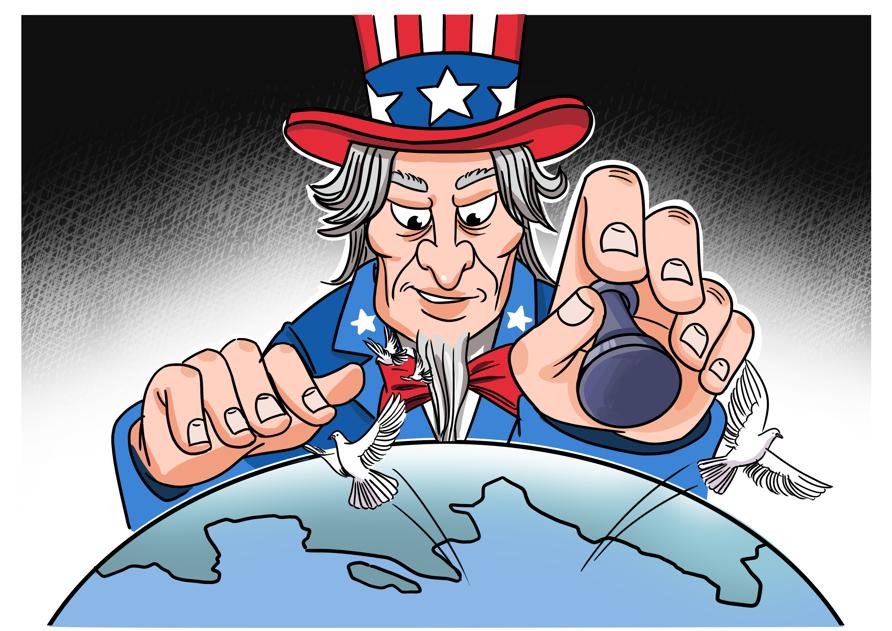 Today, with the world entering a critical phase of great turbulence and tremendous changes, all the countries are faced with a strategic choice of which way to go forward. President Xi Jinping, from the viewpoint of the "Asian Community of Shared Future", has said that the Asian people should cherish the hard-earned peace and development.

They also need to continue developing and strengthening Asia, demonstrate Asia's resilience, wisdom and strength, and make Asia an anchor for world peace, a powerhouse for global growth and a new pacesetter for international cooperation.

On the other hand, US President Joe Biden argued in March that the United States is at an inflection point, which occurs every three or four generations; therefore, it must seize the significant opportunity to lead the making of a new world order. It is to advance the "Indo-Pacific" strategy, which takes China as the most serious long-term challenge, that the US seeks to remake the world order.

Aim to maintain US hegemony

In contrast to China's vision for the Asia-Pacific, the purpose of the US' "Indo-Pacific" strategy is to maintain its hegemonic system under the pretext of pushing for regional freedom and openness, which runs counter to the interests of all countries and peoples in Asia.

On June 11, US Secretary of Defense Lloyd Austin delivered a speech at the 19th Shangri-La Dialogue in Singapore, titled "Next Steps for the US Indo-Pacific Strategy", in which he proposed the steps the US would take in the future to advance its "Indo-Pacific" strategy.

Consistent with the US' "Indo-Pacific" strategy report released on Feb 12 and US Secretary of State Antony Blinken's recent speech on Washington's China policy, Austin continued to emphasize the importance of pressing ahead the "free and open Indo-Pacific" and rule-based international order, accusing China of "intimidation" and "coercion" in the East and South China seas and on the Taiwan question, and vowed to strengthen the US' alliance system and hold more bilateral and multilateral military exercises and training to enhance solidarity and interoperability.

Lt Gen Zhang Zhenzhong, deputy chief of the Joint Staff of the Central Military Commission, resolutely refuted the groundless accusations of the US side at a background briefing following Austin's speech, and said the US' "Indo-Pacific" strategy is a strategy that creates divisions, triggers confrontation and breaks peace.

Given the historical development trend and the common aspirations of the countries in the region, the US' strategy is destined to failure. First, the US' future attempts to push its "Indo-Pacific" strategy will further divide the Asia-Pacific region into confrontational groups or blocs, undermining regional peace and stability. The focal point of Austin's speech is to strengthen the US-led alliance system to "shape the strategic environment around China", so as to maintain the US' global hegemony.

The main idea behind this stratagem is to transit from the one-to-one engagement with China to many-to-one containment of China. The key for the US to materialize this stratagem is to reconstruct or rebuild the US-led Asia-Pacific alliance system. For that, the US employs two sets of manipulations.

One is to establish an Asian version of NATO, that is to say, to construct thick and multi-layered alliance mechanisms in light of the diversity of the Asian countries, and then connect the different mechanisms and weave them into a close network and finally bring its Asian allies into a homogeneous NATO-like alliance.

Two is to bring its Asia-Pacific allies and NATO allies together, by welcoming Japan, the Republic of Korea, Australia and New Zealand to attend the Madrid Summit of NATO in late June, as well as introduce NATO to the Asia-Pacific, thereby helping it to go global.

No matter which set of manipulations the US employs, the aim is to reinforce the US to contain and suppress China. The outcome will inevitably divide the Asia-Pacific countries into blocs and induce group confrontation, accelerating the buildup toward a new Cold War. Such a situation would also seriously impact the centrality of the Association of Southeast Asian Nations in the region, and force the Asian countries, including ASEAN member states, to take sides between China and the US.

Second, the US' future attempts to push forward its "Indo-Pacific" strategy will greatly damage the development atmosphere in the Asia-Pacific, which in turn would derail regional cooperation and prosperity. Now, the Asia-Pacific region is the most powerful engine of global economic growth with the highest development potential.

While all this relies on the peaceful and stable security environment and the adherence of the countries in the region to the development-first principle, the Russia-Ukraine conflict has clearly shown that once the security logic gains the upper hand, a country's development and regional cooperation will be set aside and become the direct victim of the confrontation among states. Over the last decade, the main theme of the pursuit of peace, development and cooperation in the Asia-Pacific has experienced two severe drawbacks due to the US' strategic shifts.

The first time was in 2009, when the Barack Obama administration announced the "return to Asia" strategy and then spread panic over security issues in the region, and subsequently provoked a series of disputes over the Diaoyu Islands and the Huangyan Island in the East and South China seas respectively. Those incidents severely dampened the region's aspiration for development and cooperation, while the US pushed ahead its "pivot to Asia" strategy by taking advantage of the situation.

The second drawback is the US' exploitation of the Russia-Ukraine conflict, by hyping up the "Russia-China axis" narrative and mobilizing its alliances against Russia around the globe to oppose China, with an aim to sever China's economic relations with other countries in the region.

By doing so, the US is trying to bind its allies and partners into its "Indo-Pacific" strategic framework. The US aims to weaken China's economy and by default strengthen its dominance over the world economy, with the direct outcome being the total ruining of economic cooperation results, including the economic prosperity which the ASEAN countries have striven for over several decades.

Third, the US' attempts to implement its "Indo-Pacific" strategy could even trigger a conflict in the Asia-Pacific, dragging the region into the abyss of war. Recently, Canadian and Australian warplanes have conducted close-in reconnaissance off the coast of China, which clearly constitute provocative, unsafe and unprofessional operations. These irresponsible and hostile conducts are an infringement on China's sovereignty and national security, and undermine regional peace and stability.

As for the Russia-Ukraine conflict, the US fully supports Ukraine, supplying it with weapons and other military equipment, and drawing a wrong analogy between Ukraine and Taiwan. While saying that he will not send US troops to Ukraine to fight against Russia, Biden openly stated that the US would get militarily involved to defend Taiwan in case of a cross-Straits conflict.

On June 8, just before the meeting between Chinese Defense Minister Wei Fenghe with US Defense Secretary Austin during the Shangri-La Dialogue in Singapore, the Biden administration announced its fourth arms sales worth $120 million to Taiwan.

Such a move constitutes gross interference in China's internal affairs, threatens China's sovereignty and national security, and seriously endangers peace across the Taiwan Straits. It will also send the wrong signals to the separatists on the island and further encourage "Taiwan independence" forces to take more risks.

US provocations could trigger conflict in region

The irresponsible remarks and deeds of the US will further increase the already high tensions across the Straits, and could even spark a conflict between China and the US if the US side doesn't stop its provocative moves. This would be catastrophic for the Asia-Pacific, and there will be no winner in such a situation.

Everything being taken into account, the code of Asia-Pacific security and prosperity is win-win cooperation, not zero-sum confrontation. The Asia-Pacific region ought to become a pacesetter for peace and development rather than an arena for geopolitical games.

All the designs to push the Asia-Pacific into a new Cold War by transforming it into confrontational blocs will fail. But to prevent the region from turning into a battlefield, all countries in the Asia-Pacific including the ASEAN member states need to realize the truth behind the US' "Indo-Pacific" strategy, and avoid falling into the "Indo-Pacific trap" set by the US.

The US' "Indo-Pacific" strategy harbors the US' self-interests and evil intents, which will not gain the support of the people of the region and thus lead to failure in the end.