OPINIONS US is bound to pay a price for joint drills with S.Korea: N. Korean ambassador to China

US is bound to pay a price for joint drills with S.Korea: N. Korean ambassador to China 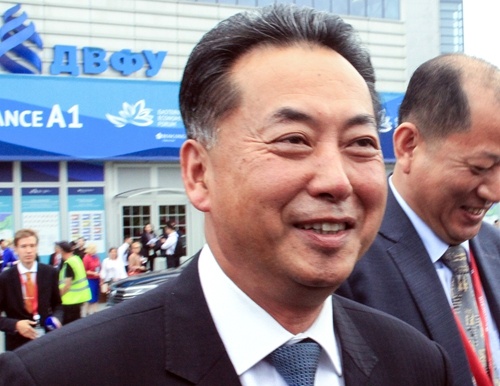 Ri Ryong-nam, North Korean ambassador to China, told the Global Times in an exclusive interview recently that a series of US-South Korea joint military exercises that started on Tuesday are the most concentrated performance of US hostile policy against North Korea. "It's unwelcome and they will definitely pay the price for that."

US and South Korean military drills will further add uncertainty to the current situation. And the timing of the drills this time showed that the US "intends to use its strength to contain and destroy North Korea," said Ri, adding that US' actions are a threat to the safety of the North Korean people.

Regardless of the scale and type of the drills, they are a rehearsal of a war, or even a nuclear war, Ri remarked. He noted that the purpose of the US is to improve its combat plan to launch pre-emptive strikes against North Korea. "This is the aggressive nature of the ongoing drills."

The US government has ignored the opposition at home and abroad against conducting the drills, which proves that the US has no intention to solve problems through dialogue but attempts to overthrow North Korean regime by force, Ri said.

"The current situation proves that North Korea's decision to strengthen its national defense is an absolutely correct and legitimate measure," Ri told the Global Times.

In order to realize the peace of the Korean Peninsula, the US must withdraw the troops and weapons it deploys in South Korea for invasion and wars, Ri said. "As long as US troops stay in South Korea, the problem, that worsens the peninsula situation, will not be eliminated."

Ri stressed that the facts prove that "words are not enough, and only by accumulating strength to effectively contain the threats imposed by foreign forces to North Korea, can we ensure the peace and security of the Korean Peninsula. This is what we must do to safeguard ourselves, it's a matter of life and death."

He said North Korea has made it clear that it will deal with the US based on the principle of "being tough to respond to toughness, being kind to respond to kindness."

Ri added that as long as US military threat toward North Korea exists, no one can expect peace and security of the peninsula. And to deal with the US threat, North Korea has legitimate rights to defend its national sovereignty, territory and people.

As US policy toward North Korea hasn't changed, from now on, Pyongyang will not sit and watch the various threats from the US, but it will strengthen its absolute deterrence to crush the increasing military threat from the US, Ri said.

Ri added that he has noticed that "personages from different fields in China including the media and academic circle have expressed their concerns in recent days over the impact that the US-South Korea joint drills will have on the situation."

Currently, not only in the Korean Peninsula, the US has also conducted intensive joint drills with China's neighbors, and the US' purpose is to tighten its "military binding" with its allies, to pressure China and further strengthen its strategic encirclement against China, Ri said.

"It's not difficult to see that the US will strengthen its military activities against the Asia-Pacific countries including China. The US is the common threat to North Korea and China, and the two countries should deal with it by strengthening their cooperation."

Meanwhile, North Korean Ambassador to Russia Sin Hong-chol said that Pyongyang intends to ramp up cooperation with Moscow to counteract the US,according to TASS on Wednesday.

"We will also boost cooperation between North Korea and Russia with the view to counter the US, a common threat, and continuously strengthen and develop at a higher level the strategic and traditional relations between our two countries in accordance with requirements of the new century," he said in an interview with TASS.

According to the ambassador, Pyongyang cannot ignore the threats it faces at the backdrop of the hostile policy that the US pursues against North Korea.