A noisy narrative pushed by some US and UK media persistently projects the United States and the United Kingdom as "democracies" while labeling China and Russia as "autocratic states". 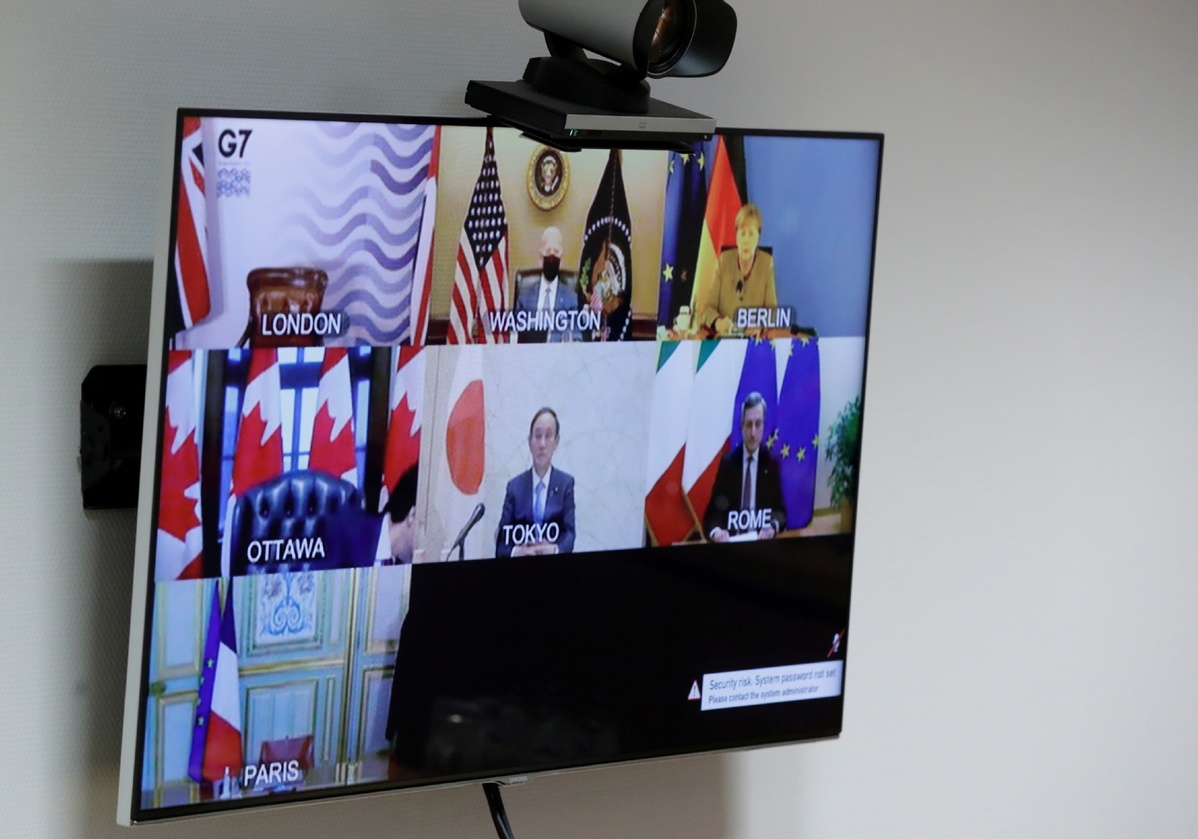 General view of the screen of the Online G7 Summit at European council headquarters in Brussels, Belgium Feb 19, 2021. (Photo: Agencies)

This narrative, often emboldened by Western politicians, resonated again at the Group of Seven virtual summit on Friday as "shared democratic values" were touted.

The truth is the US-led "democratic" system, camouflaged with so-called shared values, has so far proven a failure in multiple areas, from the COVID-19 virus to extreme weather.

In the US, stopping COVID-19 infections has been an impossible mission even a year on. Despite recent drops in newly confirmed cases, the US takes a disproportionally large part of the world's infections and deaths. The British government's performance had been criticized throughout last year, until their vaccination program began recently.

During an unusual freeze that swept across southern and central US, the US "democratic" system saw its elected Senator Ted Cruz flee to a holiday in Mexico while his electorate was left in darkness and cold, only to return after calls for his resignation. This "democracy" also witnessed how helpless people fare during an emergency under a free market-ruled and private power grid in the state of Texas.

In contrast, China's success in containing the virus as well as severe floods, despite extreme conditions never encountered by the US and UK, has shown the world how effectively its own democratic decision-making works and what good governance means to a country.

US and UK media have to be reminded China also values democracy, and all Chinese leaders have been elected through a complicated democratic process in the world's most populous nation, though Western media often dismisses this truth out of hand.

Chinese election mechanisms born out of its own situation have proven beneficial for its fight against virus, floods and economic slumps, saving as many lives as possible and lifting millions of people out of absolute poverty that had plagued them for generations, even during the unprecedented difficulties posed by the pandemic.

The biggest fallacy of the US and UK narrative of "democracy vs. autocracy" is only their political systems are democracies, while those in Russia, China and other developing nations are wrongly taken as inferior, and often targeted for potential confrontation.

The fact is democratic systems throughout the world have different forms, each evolving on their own paths of history and contemporary needs. The difference between US and UK elections itself is proof. Don't forget, although former US president Donald Trump is often attacked, he himself was the result of US elections.

To uphold one democratic system as a universal standard is like forcing the same suit on everybody.

The standard for whether a democratic system is good or not should not be the rhetoric of Western media outlets with deeper pockets than others, nor the assertions of politicians who spare no opportunity to laud themselves. Instead, the most important criterion should be the system's effectiveness in enabling people to have a better life and advancing social progress.

Judging from this perspective, US "democracy" has performed badly: it left hundreds of thousands in squalor after Hurricane Katrina in 2005 and snowstorms this week; it has failed to improve the lives of the majority of US residents, as was shown by a US survey showing the real-term average hourly income of the US middle class was lower than it was than four decades ago; it has lost 495,000 lives to the pandemic as of the time this was written, despite the most advanced technologies and greatest resources available; and it is among the world's worst countries in stopping the spread of SARS-CoV-2.

The fault line of the "democracy vs. autocracy" narrative is putting cart before the horse.

Democracy, in whatever form it takes, is a tool, a means for social achievement and human progress, not an end in itself; the purpose of a democratic system should be sound governance to advance better living for all.

China's success in governance is rooted in its democratic process. Through wide consultation, the proposals of doctors, scientists, industrialists and social activists are streamed into policy-making institutions where decisions are made for the benefit of all.

Yet it is the US and UK that keep selling their political values to other countries. When this is met with resistance, they resort to warplanes, bombs, violent protests and occupations aided by loud media voices to push for "regime change".

Now, most people in the world are still denied a vaccine and exposed to worse living conditions while those in the US and UK have much easier access. Still, US and UK politicians and media outlets ignore their deficiencies and intensify their self-styled narrative against a successful China. They will eventually pity themselves on the wrong track of history.

The author is a current affairs commentator based in Hong Kong.