US President Donald Trump announced on June 12 that he intended to end US military drills with South Korea, calling them "inappropriate" and "provocative." He also said he wants "at some point" to withdraw US troops currently stationed in South Korea. A public clamor resulted as this was seen to be another of Trump's whimsical decisions. Criticized by US politicians, Trump's shocking declaration left Seoul at a loss and made South Korean troops nervous. 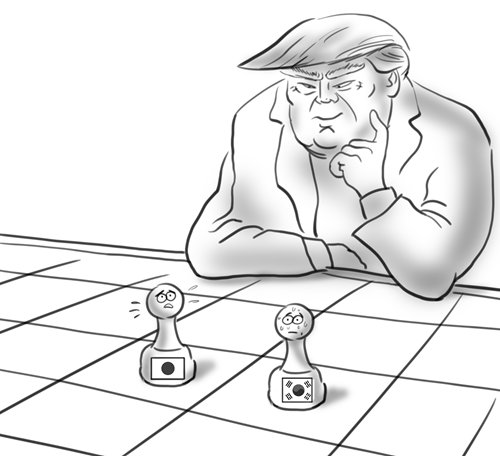 Japan is more nervous than South Korea. After all, while South Korea has been endeavoring to improve ties with the US, North Korea and China, Japan faces an unfavorable geopolitical environment given its soured relations with countries in the region. Tokyo needs to make sure that US troops in Japan will not be influenced by Washington's plan to pull troops out of South Korea, otherwise Japan would have to reshuffle its defense arrangement.

Japanese Defense Minister Itsunori Onodera said on June 13 that "the drills and the US military stationed in South Korea play a vital role in East Asia's security" and that Japan would continue joint military exercises with the US and stick to plans to bolster its defenses against a possible ballistic missile strike by North Korea.

According to the reaction of US politicians and the international society, Trump's announcement is more likely to be his personal declaration. This seems to be a negotiation strategy by Trump.

US alliances with Japan and South Korea are cornerstones of the US' military and political influence in the Asia-Pacific region, to which US troops in the two countries are vital.

One and a half years in office, Trump has been through great upheavals and is no longer an outsider to politics. Instead, he combines the sagacity of a businessman with Washington's political wisdom. Although unfair and shunned by the international society, his method did benefit the US from the point of view of Machiavelli's empiricism. His announcement in Singapore can be viewed from this perspective.

Trump wants to show some kindness to North Korea. He is good at coupling threats with promises. His pledge to end the joint military drills can help prolong the detente after the Singapore summit. Even if North Korea takes a tough stance later for some reason, Trump has already made a mark globally.

The US president, who likes to get even with other countries, also wants to bargain with South Korea. In his opinion, the US has been squeezed out of its great national strength since the George W. Bush administration, shouldering too much global burden without commensurate returns.

Trump stands firm on the expenditure incurred on US troops in South Korea and Japan. It could be that his sudden and unilateral announcement is a way of forcing Seoul and Tokyo to make concessions and bear more of the military expenditure.

Another problem is who is going to pay the huge compensation once North Korea starts denuclearization. Obviously, Trump will not pay a penny, and China and Russia are not obliged to do so, which means that Trump has to mount pressure on South Korea and Japan to foot the bill.

It seems to go well: Japanese Chief Cabinet Secretary Yoshihide Suga said the day after Trump's announcement that Japan is prepared to help shoulder some of the initial costs of North Korea's denuclearization only after the International Atomic Energy Agency restarts inspections.

If Trump's pledges to halt US-South Korea joint military drills and withdraw US troops from South Korea are considered a diplomatic strategy, then the US might have three main policies for Northeast Asia. Washington will continue strengthening its alliance with Japan and South Korea, and will force the two allies to take more economic responsibilities.

Besides, the US-South Korea joint military drills may be scaled down and the number of US troops in South Korea reduced so as to pacify Pyongyang and save costs. However, military drills will be used again to threaten Pyongyang once it doesn't proceed with the denuclearization as Washington wants. Trump will also face obstacles from the establishment over the details of reducing US troops.

Moreover, despite his praise of China, Trump won't stop pressuring Beijing over security and trade issues and will try to rope in Tokyo and Seoul. How Japan and South Korea will respond depends on their assessment of China and the US' influence in East Asia and positioning of themselves.

The author is associate research fellow of Chongyang Institute of Renmin University and the Charhar Institute.