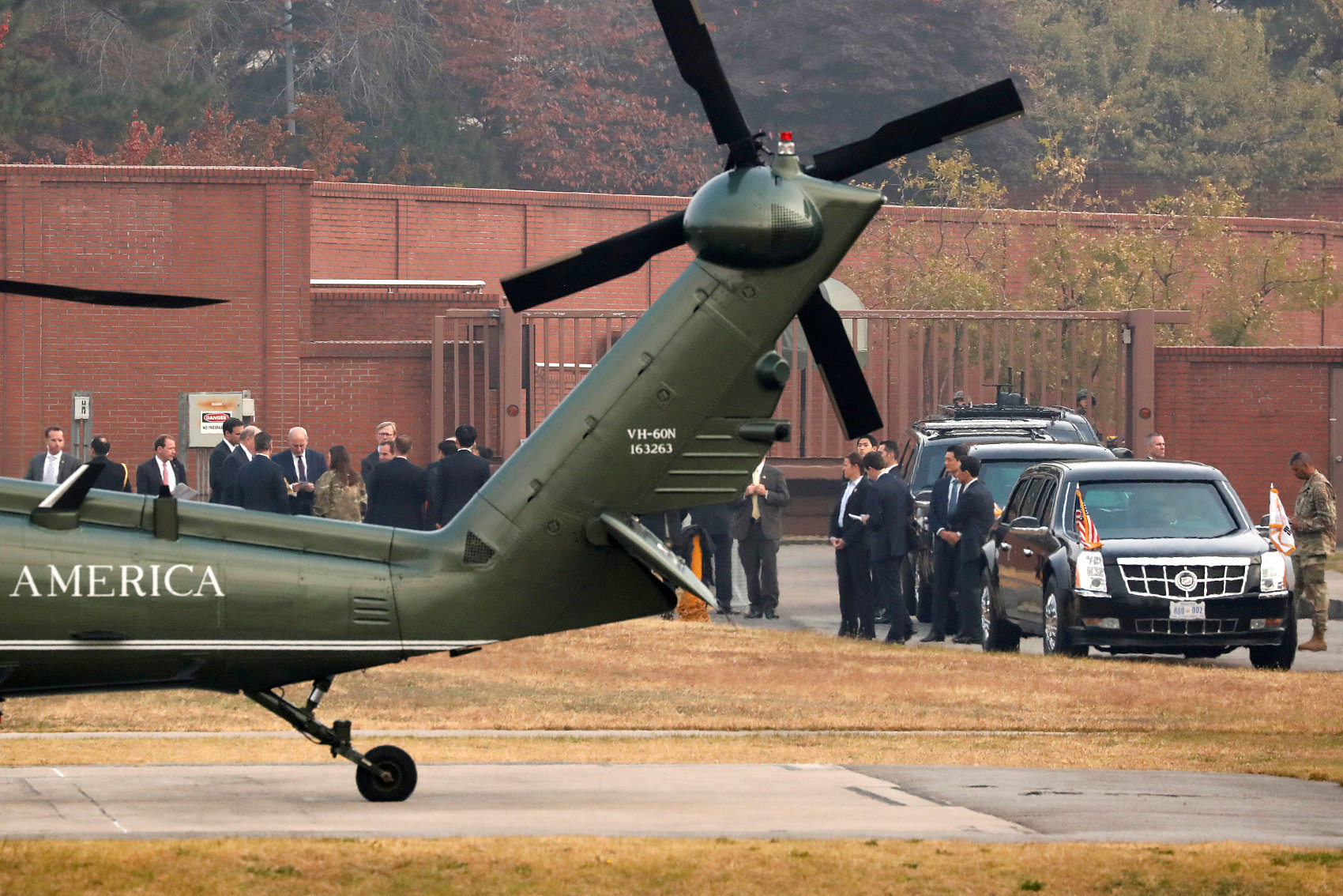 White House senior staff discuss the situation as U.S. President Donald Trump sits in his car after being grounded from an attempt to visit the Demilitarized Zone (DMZ) in the truce village of Panmunjom dividing North Korea and South Korea, at a U.S. military post in Seoul, South Korea, November 8, 2017. (Photo:VCG)

The visit to North Korea on Friday by Song Tao, special envoy of General Secretary of the Communist Party of China (CPC) Central Committee Xi Jinping, has attracted worldwide attention. In a tweet Thursday, US President Donald Trump said "China is sending an envoy and delegation to North Korea - A big move, we'll see what happens!" Trump's reaction reflects the high expectations the outside world has placed on the visit. But the understanding of Sino-North Korea relations which underlies expectations is not necessarily objective and accurate. Washington has always hoped that Beijing could help solve the North's nuclear issue and signaled that it overestimated Beijing's leverage on the North.
The key mission of Song, head of the CPC Central Committee's International Department, to North Korea is obviously to inform Pyongyang about the 19th CPC National Congress. Song completed a similar visit to Vietnam and Laos earlier this month. Pyongyang is just the latest stop.
Relations between the CPC and North Korea's Workers' Party, as well as between Beijing and Pyongyang, have been in trough. The two sides diverge on the nuclear issue, which has eroded their mutual trust. High-level exchanges between Beijing and Pyongyang have been greatly reduced, which makes Song's visit even more a center of attention. Observers have speculated that Song is likely to talk about the nuclear issue with the North Korean side.
China is a key party that can help resolve the peninsula nuclear issue but is not a decisive party. Whether the standoff over the North Korea nuclear issue can be resolved depends on whether Washington and Pyongyang have developed their political resolve.
It has been two months since Pyongyang last carried out a major nuclear weapons-related activity. Washington's war of words with Pyongyang culminated during the UN General Assembly meetings in September, where Trump threatened to "totally destroy" North Korea. North Korean leader Kim Jong-un rebuked Trump's threat by saying he will "pay dearly" for his threats.
US military activities on the peninsula are generally increasing. Washington is also deliberating whether to put North Korea on a US list of state sponsors of terrorism, which is seen as Washington's latest pressure on Pyongyang.
But the Trump administration in the second half of the year also formally stated the "the four nos" policy - not seek a regime change, a collapse of the regime, an accelerated reunification of the peninsula or military deployment north of the 38th parallel dividing the Korean Peninsula. In a new sign of reduced rhetoric against the North, US Defense Secretary Jim Mattis said on Thursday that there could be an opportunity for talks between North Korea and the US if Pyongyang stops testing and developing its nuclear and missile programs.
There is still a wide gap between Washington and Pyongyang on their stances. With mistrust to the outside world, North Korea appears dead-set on completing its nuclear missile tests. The Trump administration's strategy still focuses on exerting greater pressure on the North to push it to change.
Objectively speaking, both Washington and Pyongyang have been fed up with their war of words. Can Song's visit to North Korea prompt Washington and Pyongyang to face their own dilemma and attempt new options?
Obviously, the US is the active strategic player on the peninsula nuclear issue with more resources and means to influence the direction in which the situation goes. Washington needs real resolve and drive to change the situation on the peninsula. Some observers believe that if Washington talked about "the four nos" policy two years ago, the current situation on the peninsula may have totally been different. Washington needs to reassure North Korea of a sense of security and shouldn't do it grudgingly. To allow Pyongyang to have a sense of security is the prerequisite for resolving the peninsula nuclear issue.
Song is not a magician. The key to easing the situation on the peninsula lies in the hands of Washington and Pyongyang. If both sides insist on their own logic and refuse to move in the same direction, even if Song opens a door for talks, the door could be closed anytime.