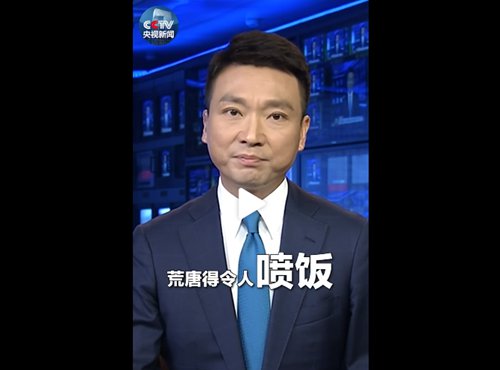 A commentary aired on China's most-watched news program delighted net users after it said narratives from a letter of US hard-liners on China were so absurd that it made people "spit their meals," a Chinese way of describing the situation of choking with laughter.

The letter from more than 100 so-called hard-liners on China which claimed that "politics is the norm and war is the exception" in the US political system and that China is the opposite, is absurd enough to "made people spit their meals," said the commentary on Thursday.

The commentary was aired on Xinwen Lianbo, a prime-time news program of China Central Television.

Since its establishment in 1776, the US has been at war for more than 90 percent of its 200-year history, and US defense spending in 2018 reached $640 billion, the highest in the world, the commentary said.

The US is such a militant while accusing China of not being a "peaceful regime," read the commentary, asking who the world's true bully is.

"Spit one's meal" is a casual phrase in Chinese to express one's shock and mock after hearing something absurd. Such expressions were seldom used on formal news programs, not to mention from Xinwen Lianbo, a program that many political observers see as an indicator of China's political ecology.

A video of the commentary generated a considerable response from Chinese net users. The hashtag of "spit one's meal" attracted 59.6 million page views as of press time and remains among the 10 most searched terms on China's Twitter-like Sina Weibo.

"I never thought Xinwen Lianbo was so amusing. It shows that China is stronger and the country is getting more confident and tougher," wrote a net user.

Most of the military operations since World War II have been launched by the US and the US has never gone through a decade without war, according to an article published by the Montreal-based Centre for Research on Globalization in 2015.

In most of those wars, the US was on the offense, it noted.

No wonder polls show that the world believes America is the number one threat to peace, said the article.

The letter is full of "wrong and disgusting" clichés from the US' Cold War mentality, Shen Yi, a professor at the School of International Relations and Public Affairs of Fudan University, told the Global Times.

The writers painted an illusion of "China is challenging the US" and made no secret of their obsession to the global order with US hegemony, said Shen, calling them a group of "living fossils of the Cold War."