OPINIONS US needs to respect intl opinion of Iran deal

US needs to respect intl opinion of Iran deal 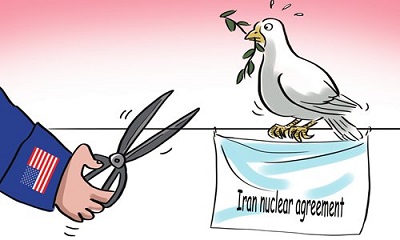 Washington has been following its unilateral hardline path. US President Donald Trump announced Thursday he will decertify the 2015 Iran nuclear deal and impose sanctions on Iran's Islamic Revolutionary Guard Corps. He also claimed that "In the event we are not able to reach a solution working with Congress and our allies, the agreement will be terminated." His statement has met with unanimous opposition from the EU and countries like the UK, France, Germany and Russia.
According to US laws, once Trump decertifies the pact, Congress will have 60 days to re-impose sanctions. In an apparent move to ease international opinion, US Secretary of State Rex Tillerson said at a media briefing that Trump intends to abide by the Iran deal. But if the US re-imposes sanctions, Iran will retaliate by restarting its nuclear program and the process of using its nuclear power for civilian use as provided in the pact will be reversed.
The Iran nuclear deal was reached in July 2015 between Iran and six countries - the US, the UK, France, Russia, China and Germany - after arduous negotiations. The UN Security Council then approved the deal. According to the pact, Iran promised to limit its nuclear programs while the EU, the US and the international community would lift their sanctions on Iran and the International Atomic Energy Agency would be responsible for ensuring Iran complies with the deal.
It was a typical international multilateral agreement. But since its implementation in January 2016, Washington has viewed it as a bilateral one with which it has the final say. US interests are the deciding factor as to whether Iran complies with the deal. The White House even uses it as a bargaining chip to gain Congress' support.
US skepticism toward Iran's compliance comes from concerns over Iran's development of ballistic missiles. Washington hopes to impose tough sanctions on Iran to expand restrictions and prevent Iran from developing long-range strike weapons that carry nuclear weapons. But any changes to an international agreement should serve a multilateral purpose. Unilaterally decertifying the deal would inevitably tarnish Washington's international reputation and shake the foundation of the deal. The rivalry between the US and Iran is, in essence, one between the US and the international order.
The nuclear deal is not perfect, but it has provided a model for a political solution for other hotspot issues such as the North Korean nuclear crisis. Through political negotiations, the interests of different parties were coordinated, leading to a multilateral way of resolving thorny issues. The collapse of this deal would make the North Korean nuclear problem more difficult to settle. Pyongyang won't believe the US as it could easily junk an international agreement.
The shadow of war may again fall over the Middle East. A new twist in the Iran nuclear deal will add to uncertainties in an uncertain world. Iran is much stronger than North Korea economically. At this critical time, sticking to the Iran nuclear agreement is crucial to maintaining peace in the Middle East and the current international order.
Iranian President Hassan Rouhani said Trump cannot unilaterally terminate the agreement and Iran will continue to implement the deal. The leaders of Britain, Germany and France called on Washington and Congress to consider the consequences for regional peace before acting.
Still in a Cold War mentality, Washington is prone to take unilateral action. Changes in the administration mean a new president can completely deny the actions of the previous president. A string of bilateral and multilateral agreements are now under review.
Despite strong opposition and resistance from the media and politicians, the White House has shown no signs of changing its mind. Will the future world order be reshaped according to Washington's will? Probably not, because other major powers will also exert their will through joint efforts.