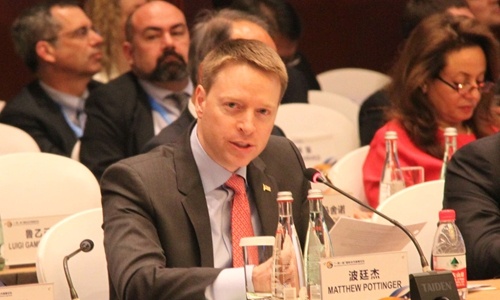 Former US deputy national security advisor Matthew Pottinger on Wednesday sounded his sensational alarm, saying "Beijing's stolen sensitive data is sufficient to build a dossier on every single American adult and on many of our children too, who are fair game under Beijing's rules of political warfare."

"Assembling dossiers on people has always been a feature of Leninist regimes, but Beijing's penetration of digital networks worldwide, including using 5G networks… has really taken this to a new level," Pottinger said during a Senate Intelligence Committee hearing on Wednesday.

Pottinger's words are purely Cold War paranoia and go against common sense. What he accused China of is exactly what the US has done to the world. The US has much more powerful big data capabilities then China. Its PRISM surveillance program began as early as in 2007, and the US has also spied on leaders of many European countries including German Chancellor Angela Merkel. Because the US has made these shameful acts, Pottinger can accuse China of such a crime that even exceeds the imagination of Chinese people.

In fact, it is not China that has "stolen sensitive data" of the American people, but the US itself. For a long period of time, the US has used its powerful technical capabilities to monitor its own people, stealing personal data and violating privacy. After the 9/11 attacks in 2001, the US launched its USA Patriot Act. This was the foundation of the massive US foreign and domestic wiretapping program. The US has also penetrated digital networks worldwide. As the French newspaper Le Monde reported, data from 62.5 million phones was collected by the US in France.

Accusing China of "stealing sensitive data" is groundless. But there is a whole series of irrefutable evidence of the US' misdeeds. The US itself is the world's largest cyber attacker, secret stealer, and the veritable hacker.

The concept "political warfare" that Pottinger accused China of was first defined by American diplomat and historian George F. Kennan in 1948 at the outset of the Cold War. It was the theoretical basis for the global political confrontation between the US and the former Soviet Union during the Cold War.

"Political warfare" was invented by the US and is what the US is best at - using political strategies to integrate economic, military, cultural and diplomatic resources to win a non-armed conflict. "Pottinger and many other US politicians have slandered China by exaggerating and even making groundless accusations, and this is a part of 'political warfare' as well. The US is very good at such propaganda," Zhang Tengjun, an assistant research fellow at the China Institute of International Studies, told the Global Times on Monday.

Pottinger's remarks represent a part of the US' overall strategy for China. Starting from the Trump administration, Pottinger has made great "contributions" to the US' overall extreme China policy. Pottinger used to work for Reuters and the Wall Street Journal as correspondent in China for about 10 years. Nonetheless, he has never been willing to treat China equally. Neither has he abandoned American centralism and Cold War mentality. He distorts what has happened in China, making irresponsible remarks to serve Western values and personal political interests.

It is not hard to imagine the credibility of the accusations made by such a former US politician who ignore facts and call white black. The US, as the culprit, is deflecting the accusations to the innocent. Such a typical trick will only continue to weaken the credibility and international image of the US. China is not the former Soviet Union. The US will only face endless difficulties in its "political warfare" against China and ultimately restrain itself.