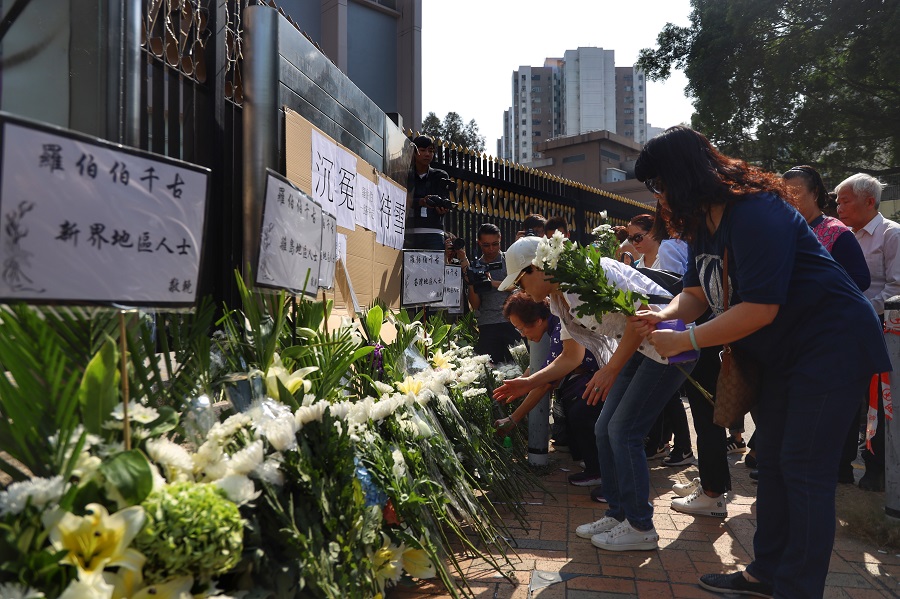 A group of residents, on Nov 15, 2019, pay tribute to a senior cleaner who died after being hit in the head from a brick, which was suspected of being thrown by a rioter in Sheung Shui. (Photo: chinadaily.com.cn)

While rioters in the Hong Kong Special Administrative Region were busy setting fire to campuses and causing the first civilian death by throwing hard objects at a 70-year-old man, certain US politicians on the other side of the Pacific were busy rendering support to them.

On Thursday, the US-China Economic and Security Review Commission (USCC), an advisory body to the US Congress, advised the latter to enact legislation that would suspend the special economic status Hong Kong enjoys under US law should China deploy forces to end the riots in the territory.

In other words, in the ongoing clash between good and evil in Hong Kong, certain US politicians have chosen to side with evil.

But the US politicians underestimate the determination of the Chinese people to defend the unity of the country and the rule of law.

On Thursday, while President Xi Jinping was attending the 11th BRICS summit in Brasilia, Brazil, he made clear that the most pressing task for Hong Kong at present is to bring the violence and chaos to an end and restore order.

The HKSAR government held a news conference on Friday in which it announced a new cross-departmental action unit, which will hold handle relevant issues. Xinhua quoted several secretaries such as those of education, transportation and housing as saying that each of their departments will honor their job responsibility and support the efforts to curb the violence.

Residents show no less support than the authorities. On Friday, residents in several communities in Kowloon, the HK Island and New Territories walked the streets clearing them of debris left by the rioters.

On the same day, a public memorial ceremony was held in Sheung Shui for people to pay their respect to the elderly sanitation worker killed by the rioters who died in hospital on Thursday night. Mourning messages were also posted on a memorial micro blog.

Those who attempt to ruin HK from within and their sponsors and bosses from outside should stop dreaming of their success, because they will not be able to break the will of the Chinese people, including Hong Kong residents, to defend the city against those trying to lead it into an abyss.