US pollsters should fix distorted surveys 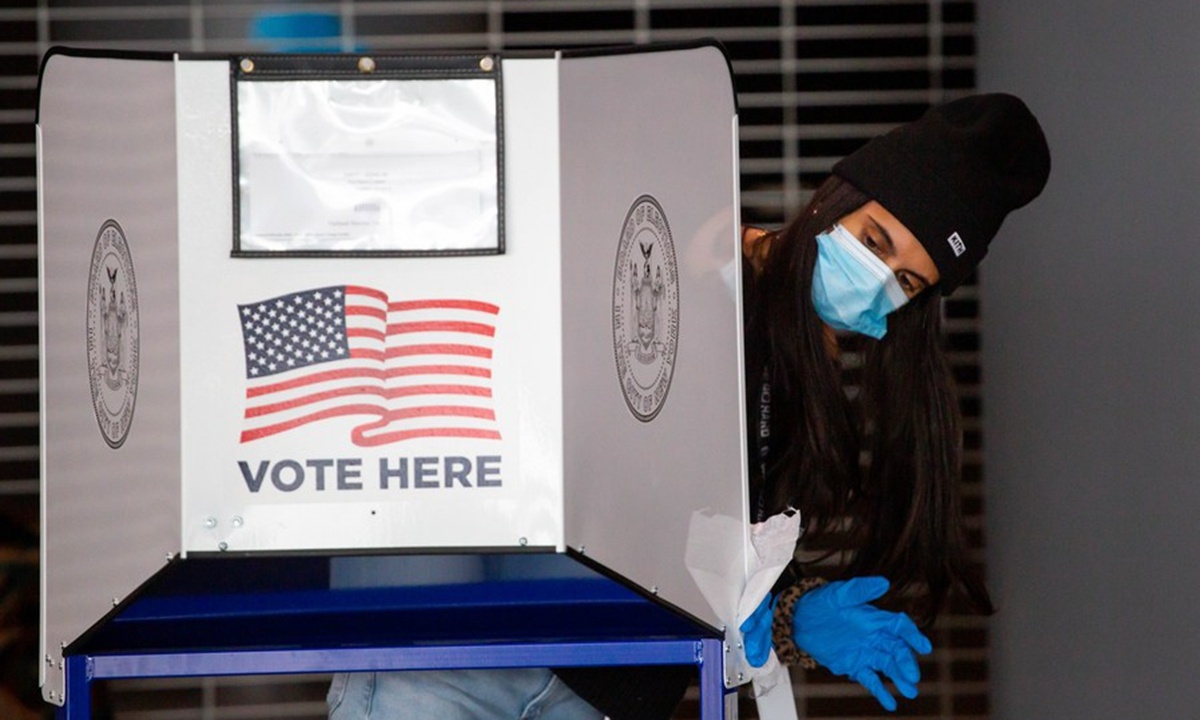 A staff member disinfects a voting booth at a polling station in Brooklyn borough of New York, the United States, on Nov. 3, 2020. (Photo: Xinhua)

No matter who wins the 2020 US presidential election, there will surely be a big loser: American pollsters.

Before Election Day, the pollsters had repeatedly released surveys showing that Joe Biden led US President Donald Trump by 8 to 10 percentage points. However, so far, it turns out that Biden has only gained 2.4 percent more votes than Trump.

The election is nail-biting. A pollster said Biden led Trump by 5 points in Florida and four in Ohio. But Trump won both.

Criticism has then been poured on pollsters. Nonetheless, the mainstream US media should be held more accountable for such false polls, as those outlets have directly participated in these surveys and published the distorted survey results. Moreover, they have been engaged in reports with presuppositions for a long time, jeopardizing the social environment for polls and intensifying the distortion of survey results.

Generally speaking, in the US it is not only pollsters but entities that manipulate public opinion that have gone wrong. These entities have radical values, while lacking inclusiveness. They have colluded with either one of the two US parties - and this seriously weakens their objectivity in reporting domestic affairs. During the presidential election, US media outlets are more like warriors who take sides than neutral reporters.

We believe that standpoints as well as likes and dislikes of the pollsters had imperceptibly affected their questionnaire design.

Clearly, US media's presupposition is not an isolated case. It has been standardized in the industry, being part of media workers' knowledge of professionalism. Many people don't think they may have gone off the track of reality or deviated from original standards of authenticity. Their so-called authenticity and objectivity are deeply filtered by their biased values.

Since the above-mentioned media outlets have miscalculated public opinion, they would do much worse when reporting China. Their bias on US domestic affairs is to some extent restrained due to their audience. But when it comes to China, they can go out of bounds at will. They can escape from being held accountable even if they make mistakes in their reports about China, as they have common interests and values with their audience on China. Against such a backdrop, what do they dare not do?

These US media outlets have, consciously and unconsciously, indulged in covering China. They collectively forge a weird China that is almost anti-human. In their description, China maliciously violates human rights and suppresses people's nature while it is ready to declare a war anytime.

However, the truth is, Chinese people's living standards have greatly improved in the past years. China has economically integrated into the world, with very frequent people exchanges with the West. Moreover, China is the only big country that has declared no war for the longest time in the world. How can such different images of China get along?

US pollsters' distorted narrative can be seen as a touchstone of American public opinion. China's COVID-19 fight versus that of the US and the West is like an apple to an oyster. Some Americans' and Westerners' deep-seated prejudice has been greatly challenged by China's achievements in epidemic prevention and economic recovery. Is this not enough to make US and Western media outlets reflect over their prejudice against China?

A prospering country that is devoted to improving its people's livelihood is nothing similar to the one described by Western media and elites as "tyranny." China's care for its people is beyond compare to US "political charity." How could such a bizarre logic possibly exist in this world?

It is hoped US public opinion institutions can be more pragmatic, restrain their arrogance and do some self-examination according to professionalism and ethics of the industry. This is respect they are supposed to have toward morality and responsibility.