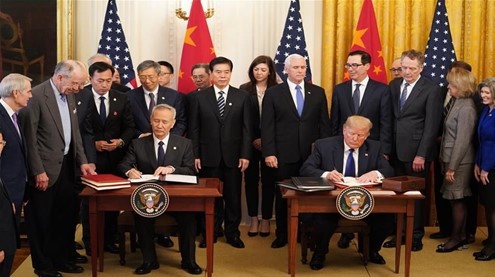 Chinese Vice Premier Liu He and US President Donald Trump signed the phase one trade deal at the White House in January. (Photo: Xinhua)

US President Donald Trump, who is overseeing one of the worst public health crises in US history and facing a tough reelection battle, has no leverage to wage another trade war with China and any attempt to pressure Beijing into making more concessions will likely prompt forceful countermeasures, Chinese trade experts close to the government said on Sunday.

Trump is seemingly threatening to terminate the China-US phase one trade agreement, a move that could end a truce and reignite the multi-year trade war between the world's two biggest economies, the experts noted.

In a startling contradiction to his top trade officials, Trump on Friday said he was "very torn" on how to deal with the phase one trade agreement. "I have not decided yet," the US president told Fox News, when asked about the fate of the deal.

The comment came just hours after his own trade officials said, after a phone call with Chinese Vice Premier Liu He, that "good progress" was made on the agreement implementation.

For many Chinese trade experts, Trump's remarks are a blatant threat to restart the trade war with China and to posture "tough" on China, in line with his overall confrontational approach to make China a scapegoat for his failure to contain the COVID-19 outbreak at home and rally support ahead of his reelection campaign.

"This is just part of Trump's effort to scapegoat China and crackdown on China," He Weiwen, a former senior trade official and an executive council member of the China Society for World Trade Organization Studies, told the Global Times.

But reviving the trade tussle with China could be disastrous to the US economy, which is already facing some of the worst challenges since the Great Depression, and Trump lacks any leverage to pressure China into making more trade concessions, Chinese experts noted.

"The US economy is in no place to withstand a broader conflict with the world's second-largest economy right now," Mei Xinyu, a research fellow at the Chinese Academy of International Trade and Economic Cooperation under the Ministry of Commerce, told the Global Times.

The US economy contracted by an annualized rate of 4.8 percent in the first quarter of 2020, the worst fall since the fourth quarter of 2008. The unemployment rate skyrocketed to 14.7 percent in April from 3.5 percent in February with a loss of 20.5 million jobs. What's worse is that the pandemic continues to intensify in the US, even as many other countries, particularly China, are recovering. Trump is also facing rising a backlash from the US business community to scrap remaining tariffs on Chinese goods.

"[Trump] wants to return to square one and start the fight again, but the US has no capital in a rematch," He said, adding that the US has only been focused on China's purchases of US agricultural products rather than holding up its end of the bargain to reduce tariffs.

Some experts have also suggested that Chinese and US officials should engage in discussions over implementation of the phase one trade agreement, as hitting certain purchase numbers might be tough amid the COVID-19 pandemic. Some even suggested that scrapping the phase one deal and restarting negotiations might be in China's interest to negotiate a better deal with the US.

In the phone call on Friday, trade officials on both sides agreed that they will continue to create a favorable atmosphere and condition for the implementation of the phase one deal and strive for positive outcomes, according to the Xinhua News Agency.

Li Yong, deputy chairman of the Expert Committee of the China Association of International Trade, said that China has the goodwill to continue the phase one deal but it will watch the US' actions closely to determine how to move forward.

"The US has been attacking China verbally this time, but in terms of actions, it remains to be seen," Li told the Global Times, noting that if the US' verbal attack turns into concrete actions, China will respond in kind.