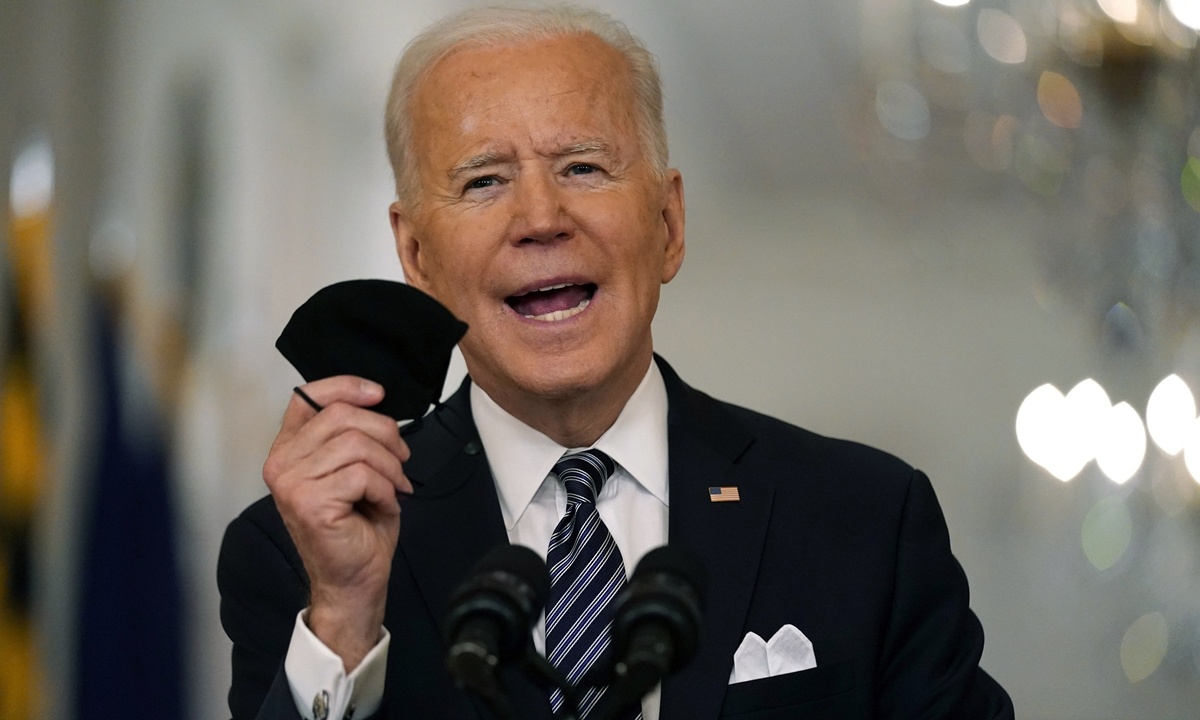 US President Joe Biden holds up his face mask as he speaks about the COVID-19 pandemic during a primetime address from the East Room of the White House in Washington. (Photo: AP)

US Trade Representative Katherine Tai announced on Wednesday that the Biden administration supports the global waiver on patent protections for COVID-19 vaccines and will take part in negotiations with the World Trade Organization (WTO). President Biden on the same day affirmed that the White House would back the WTO's COVID-19 vaccines patent waiver proposal. This has sent shockwaves across the world.

Tedros Adhanom Ghebreyesus, head of the World Health Organization (WHO), called the US decision "historic" and said it marked "a monumental moment in the fight against COVID-19."

But Germany and Switzerland publicly opposed it, so did many developed countries. Russia and France adopted a positive attitude.

On Thursday, China's Foreign Ministry spokesperson said, "China supports efforts devoted to the issue of vaccine accessibility and looks forward to active and constructive discussions among all parties within the framework of the WTO in a bid to achieve an effective and balanced result." It can be seen that China holds a generally open and active attitude toward the waiver.

If the countries which have vaccine technologies jointly support a waiver on patent protections for COVID-19 vaccines, China will not obstruct an agreement but will make due contributions.

But the current situation is very complicated. The Biden administration only made a political gesture. If an agreement is to be reached and implemented, it needs the support of all the 164 members of the WTO. Major vaccine manufacturers not only have to publish their basic technology, but also provide technique. The US has to lift a ban on the export of vaccine raw materials. This will be a tardy and difficult process.

Not only have governments of countries which produce vaccines such as Germany and Switzerland opposed it, Western pharmaceutical companies also oppose it. Without legal support and with only executive power, Biden cannot speak for US companies, let alone European ones. If any key step meets resistance, he could not make it.

Some believe the Biden administration is only paying lip service in a bid to get away from international criticism for the US' hoarding of vaccines and refusing and delaying exporting its vaccines to help other countries. After Washington made the gesture, it seems that it has turned from a selfish country to one that stands on moral high ground.

But let's encourage Washington's shift in attitude. It's good it has realized and admitted its responsibility for the global fight against the pandemic. No matter whether its statement can be implemented, it has injected some positive momentum to this global fight.

Nonetheless, deeds weigh more than words. The US should act now to export its vaccines to most developing countries and make people see that it indeed contributes to the global accessibility of vaccines. It should not simply shout out slogans and make headlines but end up doing nothing and shifting the blame on others.

China is working in a down-to-earth manner to help developing countries have vaccines. China has expanded the global accessibility of vaccines by aiding, exporting and authorizing production to other countries. China is definitely the country that has exported the most vaccines so far.

Some Western media compared the statement of China's Foreign Ministry spokesperson with the unsubstantiated one from Tai and said China is not active and the US is active in issues regarding COVID-19 vaccines, which is absurd. After all, the US has only offered words, while China has offered both words and deeds.