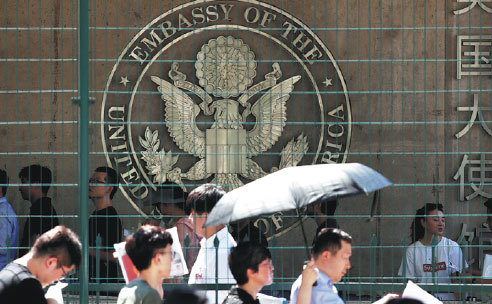 Visa applicants outside the US Embassy in Beijing. (Photo: China Daily)

China on Friday urged the United States to stop using various excuses to restrict and suppress Chinese students studying in the country amid news that Washington may cancel visas of thousands of Chinese graduate students and researchers.

The New York Times cited US officials as saying that potentially affected students are those studying science, technology, engineering and mathematics. Washington alleges that their presence presents threats of technology theft. However, there was no direct evidence that pointed to wrongdoing by such students.

If the US government blatantly takes measures undermining the legitimate rights and interests of Chinese students studying in its territory, it is political persecution and racial discrimination against them and a serious violation of their human rights, Foreign Ministry spokesman Zhao Lijian said at a daily news briefing.

In a telephone conversation with President Xi Jinping in March, US President Donald Trump said that the US people respect and love the Chinese people very much and that Chinese students are of great significance to the US educational business.

The US will protect Chinese nationals on its soil, including Chinese students, Trump added in the call.

"What the US leader said is remembered. Is the US trying to break its word?" Zhao asked, urging the country to honor the commitment of its leader.

On Wednesday, three Republican lawmakers unveiled a new bill, the Secure Campus Act, to prohibit Chinese nationals from receiving visas to the US for graduate or postgraduate studies in STEM fields.

A series of negative words and practices adopted by the US regarding bilateral people-to-people exchanges recently completely run counter to its self-proclaimed concept of openness and freedom, Zhao said, adding that they also go against the will of the two peoples and the growing trend of international talent exchanges.

Such moves have had a negative effect on normal cultural exchanges between the two countries, damaged the social foundation of the bilateral relationship and exposed the deep-rooted cold war mentality and zero-sum thinking of certain people in the US, he said.

"We support Chinese students in the US and the safeguarding of their legitimate rights and interests according to law," he added.