US rated as biggest stumbling block in China-Australia relations: survey 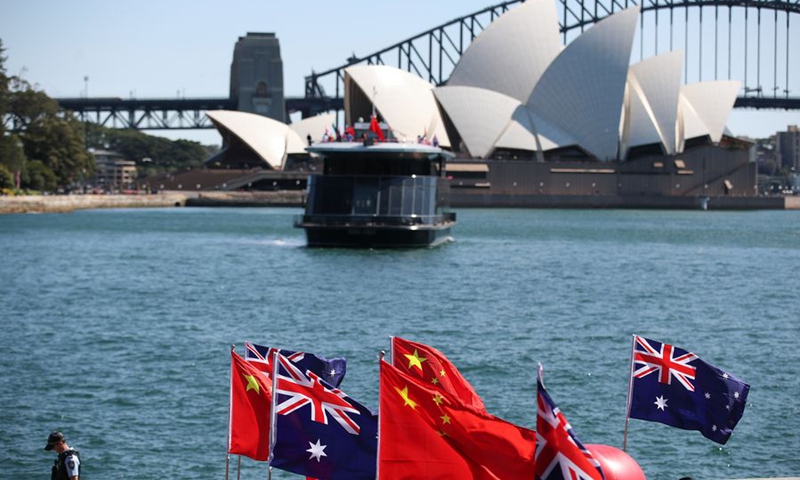 Chinese and Australian national flags are seen at an event in Sydney, Australia. (File photo: Xinhua)

Jointly conducted by the public opinion department of the Global Times and the Australian Studies Center of Beijing Foreign Studies University, the survey covers 10 major cities in the Chinese mainland including Beijing, Shanghai, Guangzhou, Wuhan and Xi'an.

The poll adopted an online questionnaire survey method based on a large-scale member sample database. It was conducted by a third-party institution from June 11 to 14, and a total of 2,105 valid questionnaires were collected.

In the survey, respondents' favorability rating of Australia averaged 65.3 points on a 0-100 point scale.

Previous years' data collected by the public opinion department of the Global Times showed Australia has ranked at second to fourth place among the "10 most favorable countries" from 2010 to 2015. However, in 2016 and 2017, Australia dropped to seventh and sixth place respectively. Although it recovered in 2018, Australia fell to sixth place again in 2019.

Regarding the trend of bilateral relations since the 2019 survey, it is expected that the country's popularity among Chinese people will decline further in 2020.

Meanwhile, the popularity of China among Australians has dropped significantly since 2019. According to the Lowy Institute, which tracks Australians' favorability ratings of other countries on an annual scale of 0-100, Australians’ favorability rating of China in 2019 was 49, the lowest since the institute first conducted the survey in 2006.

Concerning the question "What is the most disturbing factor affecting China-Australia relations" (single vote), 49.5 percent of Chinese respondents cited the US, 32.5 percent chose "ideological differences" and 13.7 percent cited domestic political factors in Australia.

When asked "How important is China's relationship with Australia for China's foreign relations," answers tipped between "moderately important" and "neutral" (Chart 1). In contrast, for Australia, China and the US have been the two priorities in its foreign relations for a long time. How to deal with these two major countries is the biggest dilemma for its foreign policy at present.

Some analysts believe that Australia's foreign policy dilemma has remained unresolved since 2018 and will further split.

When asked about “what does the role of Australia mean to China?" 66.8 percent of Chinese respondents to the Global Times poll saw Australia as "more of an economic partner," while about one-third saw Australia as more of a "political, ideological or military threat" to China.

Australia has maintained a self-identity as a "medium-sized power" for many years, and this was shown amid the coronavirus pandemic as its politicians have been actively and audaciously lobbying other countries to conduct so-called "independent investigations" in the wake of the COVID-19 outbreak.

Han Feng, a professor from the Australian Studies Center of Beijing Foreign Studies University, told the Global Times on Tuesday that although the concept of medium-sized power is blurry, many Chinese people question the ability of Australia to independently exert its influence as a major medium-sized power, and as a heavily dependent ally of the US in the Asia-Pacific region, Australia has long been a step behind the US.

The survey said that Australians have a sober understanding of the country's economic dependence on China, but that it also generates anxiety.

For example, according to the Lowy Institution, the anxiety concerning Chinese investment soared in 2018 mainly due to the media's coverage about so-called Chinese real estate purchases in Australia. After the COVID-19 outbreak, this anxiety was once again "hijacked" by some politicians, media and interest groups to promote "decoupling from China."

Han said that after a period of rapid development, China-Australia trade is close to one-third of Australia's total trade. China is Australia's largest trading partner and an important source of its trade surplus. Trade is determined by the market and is also necessary for the interests of both sides.

“The concentration of trade has understandably caused some Australian respondents to feel insecure. However, this is an issue in the development of bilateral relations, which can be handled through the joint efforts of both sides, provided that it is not overly politicized.”

After the COVID-19 outbreak, Australia's relations with China have deviated further from what Han feels is the right direction. “This does not serve Australia's own interests, nor does it help the region fight the epidemic.”

When asked to choose a tourist destination from among 12 countries, 16.7 respondents chose Australia, leading it to rank at second behind Japan. Respondents also singled out the "most desirable country for overseas studying, with Australia ranking first at 16.5 percent.

However, more than 80 percent of respondents said they would "definitely or somewhat consider" policies, favorability and bilateral relations when choosing their study/travel destination.