OPINIONS US sanction game reveals its addiction to supremacy

US sanction game reveals its addiction to supremacy 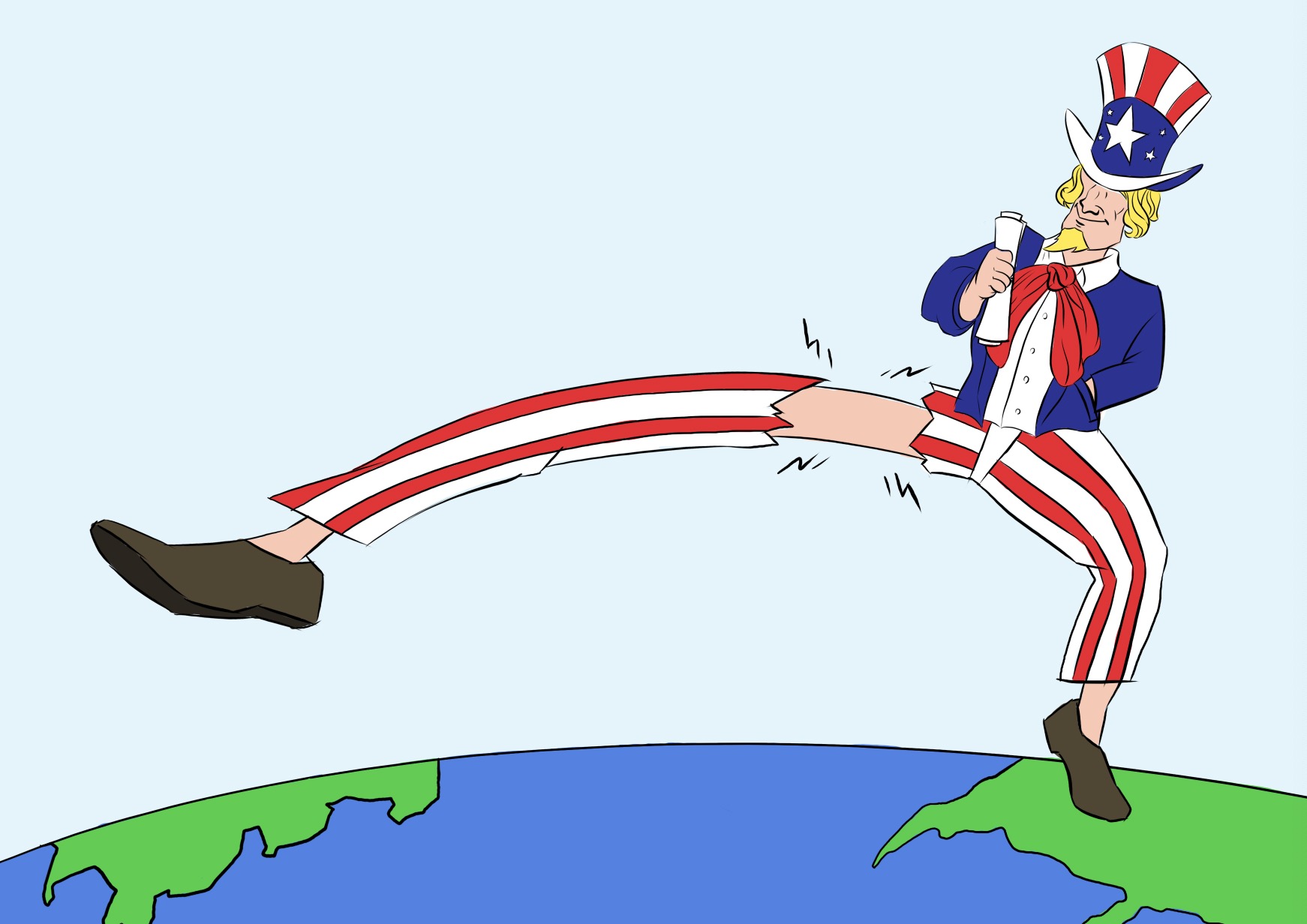 Unilateral sanction has long been a typical practice of the U.S. diplomacy, and lately, the White House once again played its same old trick.

It arbitrarily threatened to impose sanctions on Hong Kong as China progressed with its national security legislation in the special administrative region, staging another farce showing how indifferent it is to the basic norms governing international relations.

However, the Chinese government and people will never allow any force to challenge the sovereignty, security, and development interests of their country. Any attempt to interfere with China's domestic affairs was, is and will be destined to fail.

The more hypes the U.S. makes, the more it deviates from international justice. The national security legislation for the Hong Kong Special Administrative Region (HKSAR) is China’s domestic affair, so the country has the reasons and legitimacy to propel it, and the legislation conforms to the practical interests of all Chinese people, including the compatriots in Hong Kong.

Obviously, certain American politicians are unwilling to see the long-term stability and development of Hong Kong, so they wracked their brains to fabricate accusations and threaten to impose sanctions.

Washington imposed visa restriction on Chinese students and threatened to investigate Chinese enterprises listed on the U.S. financial markets, which seriously violated the market competition rules and ran counter to the hope of both Chinese and Americans to carry out friendly exchanges. Such practices will surely further damage the China-U.S. economic and trade relations, as well as the social foundation for the two countries’ bilateral ties.

Where have the high-profile and self-proclaimed openness and liberty of the U.S. gone? That’s a question raised by more and more people. Facts prove that international justice and diplomatic principles have never existed in the mind of some U.S. politicians who cherry-pick whatever that suits their own interests and abandon whatever that does not.

“To a man with a hammer, everything looks like a nail.” The sanction game of the U.S. is nothing new to the world. When dealing with international affairs, the U.S. is always obsessed with a “me-first” mentality and supremacy, arbitrarily implementing unilateral sanctions on other countries relying on its certain advantages. Lacking the awareness of international rules, the U.S. has become a destructive factor undermining normal international relations.

Nicolai N. Petro, professor at the University of Rhode Island, noted in an article titled “America is Addicted to Sanctions” that “the best way to think about the role of sanctions in American foreign policy is to regard it as an addiction.” He put it ironically that as “Americans’ view of the world shrinks to the confines of the Washington Beltway,” sanctions “provide the only semblance of calm, the only relief that politicians can rely on, and so resort to them becomes habitual.”

Some U.S. politicians have triggered huge amounts of questioning and criticism for designating  enemies based on lies and forming cliques with other countries for confrontation, especially the hysteric antagonistic remarks and practices they made when dealing with China.

Many analysts have gone right to the heart of the matter, saying these politicians are addicted to acquiring private political gains by building a “China intimidator” image. U.S. Professor Jeffrey D. Sachs at Columbia University called American right-wing force’s accusation on China “reckless and dangerous,” warning they “could push the world to conflict.”

Former U.S. Ambassador to China Max Baucus said that the U.S. government’s anti-China rhetoric reminded him of the McCarthy era. Joseph McCarthy, known for his unusual deceptive approaches that combined extreme boldness and crafty lies, had pushed the U.S. into extreme hatred and a nightmare of rampant persecution.

Experiences shall be drawn from history. The U.S. addiction to sanctions is only able to entertain Washington itself, and is a total waste of time, because the world is no longer run by zero-sum games as some American politicians assume. The international system has its rules and justice, and now the world is no longer controlled by the U.S. supremacy.

Russian Foreign Minister Sergey Lavrov remarked that issues related to Hong Kong are entirely China’s internal affairs. The U.S. threat to impose sanctions on China in response to China’s NPC deliberation on Hong Kong-related national security legislation fully exposed America’s sense of superiority and impunity, which will not make Washington a reliable dialogue partner on any other issues with China, he added.

When the COVID-19 pandemic is posing unprecedented public health and economic development challenges to the world, China-U.S. cooperation bears more significance for the world to overcome the current difficulties. The U.S. side shall enhance anti-pandemic cooperation with China, and make its relationship with China rooted in mutual respect and cooperation, rather than confrontation and conflict.

We advise the U.S. to stop its sanction game, halt its hegemonic practices, and discard Cold-War mentality and ideological prejudices as early as possible. It had better immediately stop meddling in China’s internal affairs and not to go further down the wrong path.