OPINIONS US sanctions against Iran: No bully is respected

US sanctions against Iran: No bully is respected 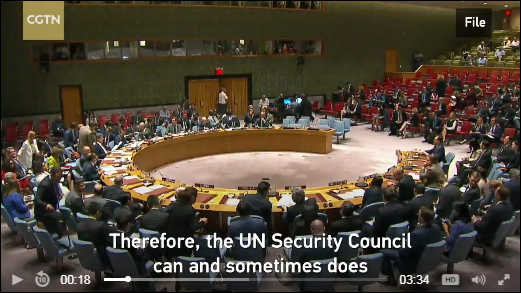 In an effort to achieve "world peace," Donald Trump has decided to re-impose "the most biting" sanctions against Iran. The US has urged all its allies to cut off oil deals with Iran, the world's fifth largest oil producer, by zero this November.

In the face of the US threat that any country doing business with Iran would face punishment, China has insisted that ties with Iran would not harm any other country; Europe has also urged companies to ignore the threats.

Iran showed no signs of caving in and threatened to close the Strait of Hormuz, a key oil shipping waterway. Could the current escalations lead to world peace finally, or is the US up for something else? John Ross, a senior fellow at the Chongyang Institute for Financial Studies under Renmin University of China, explains why the US can't get what it wants.

Q: Why did the US decide to reimpose sanctions against Iran?

R: It has to be understood in international terms that there are two types of sanctions.

What the United States is trying to carry out now is something completely different. That is, the United States is attempting to impose its own sanctions when the rest of the world doesn't agree with it. Not merely as there is no resolution of the United Nations Security Council, but the other four members with the permanent veto, that is China, Russia, France, and Britain, have made it absolutely clear that they don't agree.

So this is, therefore, the United States acting outside of international law.

Q: What’s the real purpose behind the sanctions?

R: He [Trump] is either trying to force a change in Iran's foreign policy or he is trying to overthrow the regime in Iran. And in order to do this, he's prepared to attack not merely the economy of Iran, but the economy of Europe and other countries which are doing business with Iran. So this is just unilateral behavior with the United States acting outside the framework of international law and attempting to make threats to all sorts of people.

Q: What makes US sanctions so powerful?

R: It’s the rule of the bully.

If you're big and strong and powerful, then you can threaten people. And if you're a weak country, then you can be threatened. This is not the way that the international order should be conducted or incidentally will be conducted.

The reason that it can be done is one, because of the power of the United States with its economic and military power. And secondly, because of the role of the dollar within the world monetary system.

It is still the case that the dollar is the main international means of payment. And therefore if you can be excluded from doing transactions in US dollars, which is what the US can try to do, therefore you can attempt to do serious damage to your economy.

This is the first time that's ever happened. After the Second World War, the United States was seen, rightly or wrongly, as having defeated fascism in Germany and Japan or as having played a great role in defeating fascism in these countries.

It created the international trading system. It was the main force behind globalization, and therefore a lot of countries supported it for those reasons. It had genuine popular support. There's no doubt about it. Now for the first time, you're having a situation in which the United States no longer has such respect, and therefore it's accumulating enemies.

Q: So do you think the US can get what it wants?

R: The Iranian people know what the type of regimes by the United States have been done. We can go back, even earlier in the 1950s of course. The United States overthrew the Mosaddegh regime, which was the democratically elected Iranian government.

So there are decades of hostility by the United States to Iran and interference in Iran's internal affairs. And I don't think that the people of Iran, whatever criticisms they may have of the government or whatever the problems created by sanctions, they're not going to accept a government which is imposed by the United States. So I believe that the US policy of regime change simply won't work.