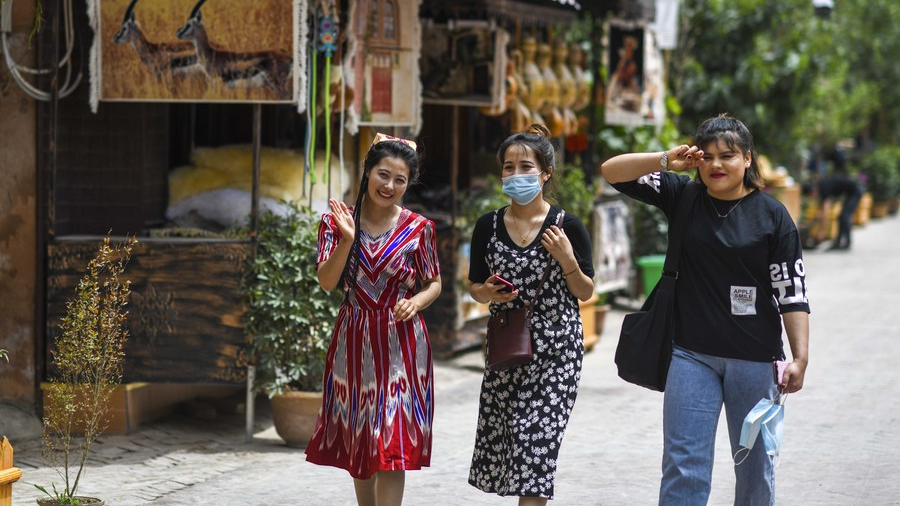 Local residents walk in a street at a scenic spot in the ancient city of Kashgar, northwest China's Xinjiang Uygur Autonomous Region, May 16, 2020. (Photo: Xinhua)

Editor's note: Bai Fan is a researcher at the Institute of Chinese Borderland Studies, Chinese Academy of Social Sciences. The article reflects the author's opinions and not necessarily the views of CGTN.

The United States often uses sanctions because of its outdated imperial mentality. On the one hand, there is an imperialist worldview and expansionist practices in the United States. In 2003, the former United States president George Bush has said that "he was instructed by God to invade Iraq and Afghanistan," according to a new BBC series.

In Stephen M. Walt's classic judgment, who is the Robert and Renée Belfer professor of international relations at Harvard University, "Over the last two centuries, prominent Americans have described the United States as an 'empire of liberty', a 'shining city on a hill', the 'last best hope of Earth', the 'leader of the free world', and the 'indispensable nation'.... The only thing wrong with this self-congratulatory portrait of America's global role is that it is mostly a myth."

They want to shape the post-Cold War world as they imagined it, as the US at the center of the world, so as to maintain and enforce their hegemony. Indeed, the post-Cold War imperialist politics proved that the US imperialist psychological superiority inevitably leads to the expansion and sanctions of US on other countries.

Meanwhile, the United States believes that it has the world's strongest economic, financial, and technological education strength, and the largest domestic market. It actually believes that these advantages could be turned into sanctions weapons. Therefore, sanctions are a non-military means of US that may be applied in various domains such as diplomatic, economic, technical, trade-related or cultural relations between states. The US Department of the Treasury released the results of a broad review of the economic and financial sanctions in 2021, and the report shows that by the end of 2021, the United States had more than 9,400 sanctions in effect, a nearly tenfold increase from 20 years ago.

At present, the United States has regarded sanctions as the main tool to exert pressure on China over the Xinjiang issue. Indeed, the US is a state with an imperial mentality, but the effort of the American imperialism is doomed to fail in the new context for international relations.

US sanctions on Xinjiang are good for none but worse for itself. According to market research firm Bernreuter Research, Xinjiang produced about 45 percent of the world's supply of solar-grade polysilicon in 2020, which is the base material for solar power used around the world. Most importantly, not only the United States wants to expand the use of clean energy sources like solar power, but also many countries are betting on solar as a critical form of renewable energy.

According to a report jointly released by the European Council on Foreign Relations (ECFR) and the Rhodium Group, Europe relies on Chinese supply chains in the field of green energy such as solar energy. In addition to polysilicon, Xinjiang's cotton, agricultural products and minerals occupy an important position in the world. To some extent, the sanctions imposed by the United States have created a risk to the global economy that could disrupt the supply chains for commodities, leading to global price rise as well as ensuing shortages; thereby hurting US industries, stimulating inflation, and reducing potential output.

This reflects that while the US sanctions might serve the interests of political pressure groups, they do not come strictly from economic considerations. The option of sanctions for Joe Biden administration is an easy choice to make, but unfortunately, the simple truth remains: sanctions on Xinjiang tend to impose greater costs on American firms and increase the risk of a more permanent fragmentation of the world economy.

U. S. sanctions on Xinjiang have never succeeded in forcing China to change its policies. Although the Biden administration has continued to increase its sanctions on Xinjiang, the Chinese government has responded with reasonable and lawful countermeasures to defend its legitimate rights and interests.

On the one hand, China passed a series of laws and regulations to counter the US hegemony and sanctions. In June 2021, the National People's Congress Standing Committee passed "the Anti-Foreign Sanctions Law" of China, responding to foreign sanctions and providing a legal basis for preventing Chinese individuals and entities from suffering the damage resulting from illegal sanctions. On the other hand, there have been no terrorist attacks in Xinjiang Uygur Autonomous Region since 2017.

In addition, its prosperity and development is the best and most powerful response to the US sanctions. According to government statistics, in 2021, the growth rates for most economic indicators in Xinjiang were at the forefront of the country, seeing a 7 percent rise in GDP. All ethnic groups in Xinjiang are feeling expanding sense of gain, contentment and security. The US's attempt to undermine harmony and stability in Xinjiang and contain China's development will never succeed.

As a coercive tool, the weapon of sanctions of the US government is deployed all over the world. Yet, not all Americans are enthusiastic about the use of sanctions. The strength of the United States global power indeed has relatively dropped, but US hegemony has not declined since the end of the Cold War.

In this context, even if the United States understands the limited effects of sanctions, the policymakers in Washington have to extend this ineffective sanction weapon into more domains. It is hard for the United States to find more effective sanctions, which shows that the US has locked itself into one strategic thinking but failed to make optimal foreign policy choices.