OPINIONS US self-harming making itself a pariah

US self-harming making itself a pariah 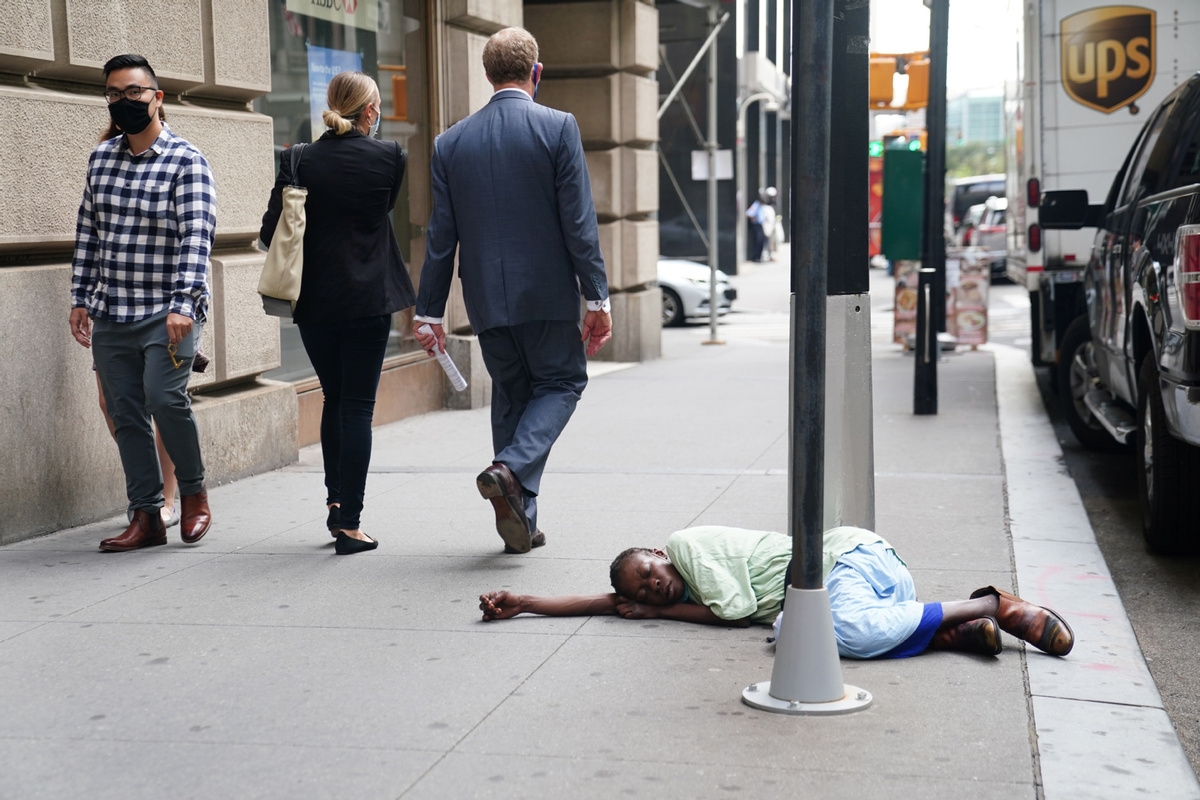 A man sleeps on the sidewalk in the financial district during the coronavirus disease (COVID-19) pandemic in the Manhattan borough of New York City, New York, US, Sept 9, 2020. (Photo: Agencies)

Although the resolution calling for "intensified international cooperation and solidarity" to deal with the COVID-19 pandemic, adopted by the United Nations General Assembly on Friday, is not legally binding, that it was overwhelmingly approved by a vote of 169 to 2 shows that countries have finally realized that the virus is a common enemy and it sets the stage for meaningful concerted action.

In other words, the vote signals there is now the shared determination — with the exception of the United States and Israel — to face this common enemy together.

Despite the US suffering the most from the novel coronavirus, which had claimed nearly 200,000 lives in the country as of Sunday, about 22 percent of the world's total, it seems unlikely that the US administration will come to its senses.

Its representative to the UN said that it opposed all references to the World Health Organization in the resolution — which included recognition of the leadership role of the WHO — showing that the administration will continue to politicize the pandemic as it sinks ever deeper into the quicksand of its own incompetence.

And even if the resolution was adopted later than it was needed to, as it was first proposed in May, that some once-hard hit countries have seemingly managed to get a grip on the contagion, means the world has not only built up its learning curve on how to effectively control it, but it has also accumulated more favorable conditions to materialize the consensus on cooperation.

That means, with the resolution in place, the space left for the US to peddle its malicious smears is drastically shrinking, while the space for the international community to step up collaboration to respond to the pandemic is expanding.

As the Chinese representative to the UN pointed out, rather than pointing a finger of blame at others, the US administration should focus on protecting the lives and health of its own people by working with the rest of the international community to contain the virus and so promote the recovery of the global economy.

Rather than trying to shirk its responsibilities and divert attention, which only serves to worsen the situation at home and sabotage other countries' efforts to contain the virus, the administration should accept that unity and cooperation are the best means to serve the interests of US citizens.

That it is the US that has been isolated on the issue of pandemic response rather than China and the WHO, which it has strived so hard to isolate, should prompt Washington to reflect on the merits of collaboration, rather than speculating on the pandemic to sow hatred and division. Unfortunately, it seems set on proving the point that when someone is set upon looking into other people's affairs, they never bother to examine themselves.