OPINIONS US should focus on tackling virus, not geopolitical rivals

US should focus on tackling virus, not geopolitical rivals 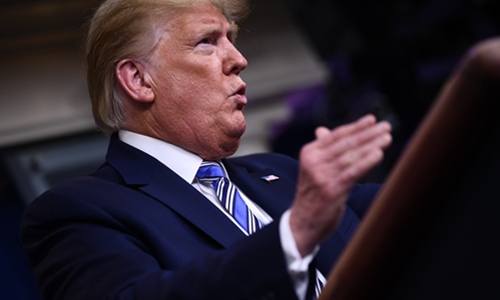 Once again, the calculating US has put its own interests high above international cooperation. Washington blocked agreement on a UN Security Council resolution that called for a global cease-fire aimed at collectively addressing the coronavirus pandemic that has swept the world.

The reported reason was that the US did not want any reference or even an implicit alternative to the World Health Organization (WHO) in the text of the resolution, as the US has accused this international health body of mismanaging its early response to the coronavirus and being China-centric, assertions the WHO has denied. One diplomat was quoted as saying, "This discussion has been taken hostage by issues that do not have to do with the real issues at stake."

This is not the first time the US has played its own hand to thwart international efforts to fight the virus. At the virtual G20 summit in March and the G7 meeting in April, the US was left isolated while others backed the WHO and called for a strong and coordinated international response.

The pandemic has witnessed over 270,000 deaths worldwide, more than a quarter of the Americans. The world is expecting the US to play at least a cooperative role, if not its traditional role as a global leader, at this juncture of crisis.

The Trump administration is politicizing the moment by prioritizing US interests over international cooperation, despite the WHO's call to end politicization of the virus. Trump has already halted US funding of the international agency, turning it into a political scapegoat to distract from his administration's failures to react to the pandemic.

The US has never truly respected international organizations and it adopted an indifferent approach when international responses are needed. From withdrawing from the Paris climate pact, paralyzing the WTO's Appellate Body, to abandoning the Iran nuclear deal, its greatest goal is to maximize its own interests by coercion and politicization.

The US does not care about how these deals or organizations really work for the benefit of humanity, but whether they serve the interests of the US. If they don't, well, it is time to attack or scrap them. The US wants a reshuffle of international relations and global interests based on its own will, which is derived simply from hubris and bluster. Washington's selfishness made manifest by Trump's "America First" doctrine, has mired global governance and efforts to fight a common enemy.

Trump is motivated more with saving his reelection this November than saving lives. In the election year, both Republicans and Democrats are focusing on politicizing the pandemic and turning it into a trial of strength and influence with China. But the very lesson the US should learn from the pandemic is that the biggest threat facing the US is not its perceived geopolitical rivals such as China, but the great nature.