US should take practical actions to repair trade ties with China 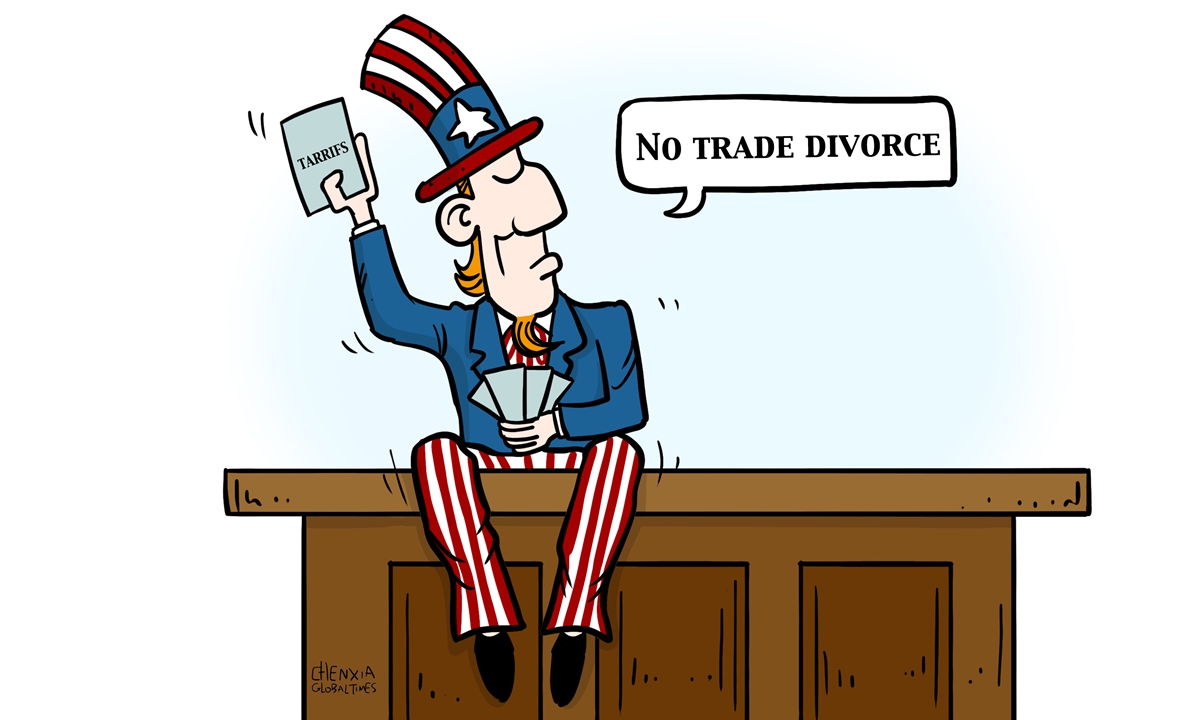 US trade chief Katherine Tai on Tuesday clarified that the US' shift in trade policy toward China is not heading toward "stopping trade or trade divorce." If the Biden administration sincerely wants to stop trade tensions from escalating, it will take more than just words.

Asked whether US-China tensions could lead to a decoupling, Tai said in a Bloomberg interview that the US is seeking to realign its commercial ties with China rather than seek a "divorce" between the world's two biggest economies. Tai's remarks followed a congressional hearing last week where she said the US needs to "turn the page on the old playbook" when it comes to trade policy toward China.

An increasing number of signs point to the Biden administration urgently needing to abandon its harmful decoupling approach on trade policies of the Trump administration. Since US President Joe Biden was elected in late 2020, the American business community, which has suffered severe losses from the trade war, has been eagerly expecting Biden to improve trade ties with China.

Yet, they have gradually lost confidence as the Biden's trade team keeps in place the tariffs and continues to intensifying pressure on China. The level of optimism among US companies in China has dropped to 27 percent, according to a latest survey published by the American Chamber of Commerce in China last month, as low as when Donald Trump was president and enacted tougher trade policies on China. It is time for Biden's trade team to take overdue actions to restore their confidence.

In addition to undermining market sentiment of US companies in China, the protracted trade war has also overwhelmed US companies at home. The US trade office last month announced plans to reinstate tariff exemptions on 352 Chinese products on which Washington first imposed levies in 2018. Such moves are clearly an attempt by the Biden trade team to quell business complaints on the US' unilateral tariffs.

However, when some congressmen urged Tai to set up an easier process for US companies to get exemptions from hefty tariffs the US imposed on Chinese goods last week, Tai has shown an incomprehensible cautious approach, saying that the US needs to really think about whether these tariffs serve its own strategic interests.

Tai's latest clarification of not seeking a trade "divorce" with China marks the first time in her recent remarks. It is a positive signal because it at least shows that the US government on some level is aware of win-win nature of the US-China economic and trade relationship.

Although the Biden administration has used the phase one deal to attack China once in a while beginning last year, the US Export Report 2022 published by the US-China Business Council on Tuesday showed that goods exports to China grew by 21 percent to an all-time high of $149.2 billion in 2021.

Countless evidences like this show that China's imports from the US have helped the US' economy weather the shock of the pandemic, and the US economy is highly dependent on its imports from the world's manufacturing center, China. To make an overdue correction to the hundreds of billions of arbitrary tariffs that Trump had imposed on Chinese products will serve the US' own strategic interests.

Commenting on the US' move to reinstate 352 products exclusions from China tariffs, China's Commerce Ministry said that such actions were beneficial and hoped the US will scrap all tariffs on Chinese goods as soon as possible to get the bilateral trade relations back on a normal track.

China has never lacked goodwill efforts and sincerity in promoting the bilateral trade between China and the US. If Biden's trade team is serious about repairing the mutual beneficial trade ties with China, they need to act.