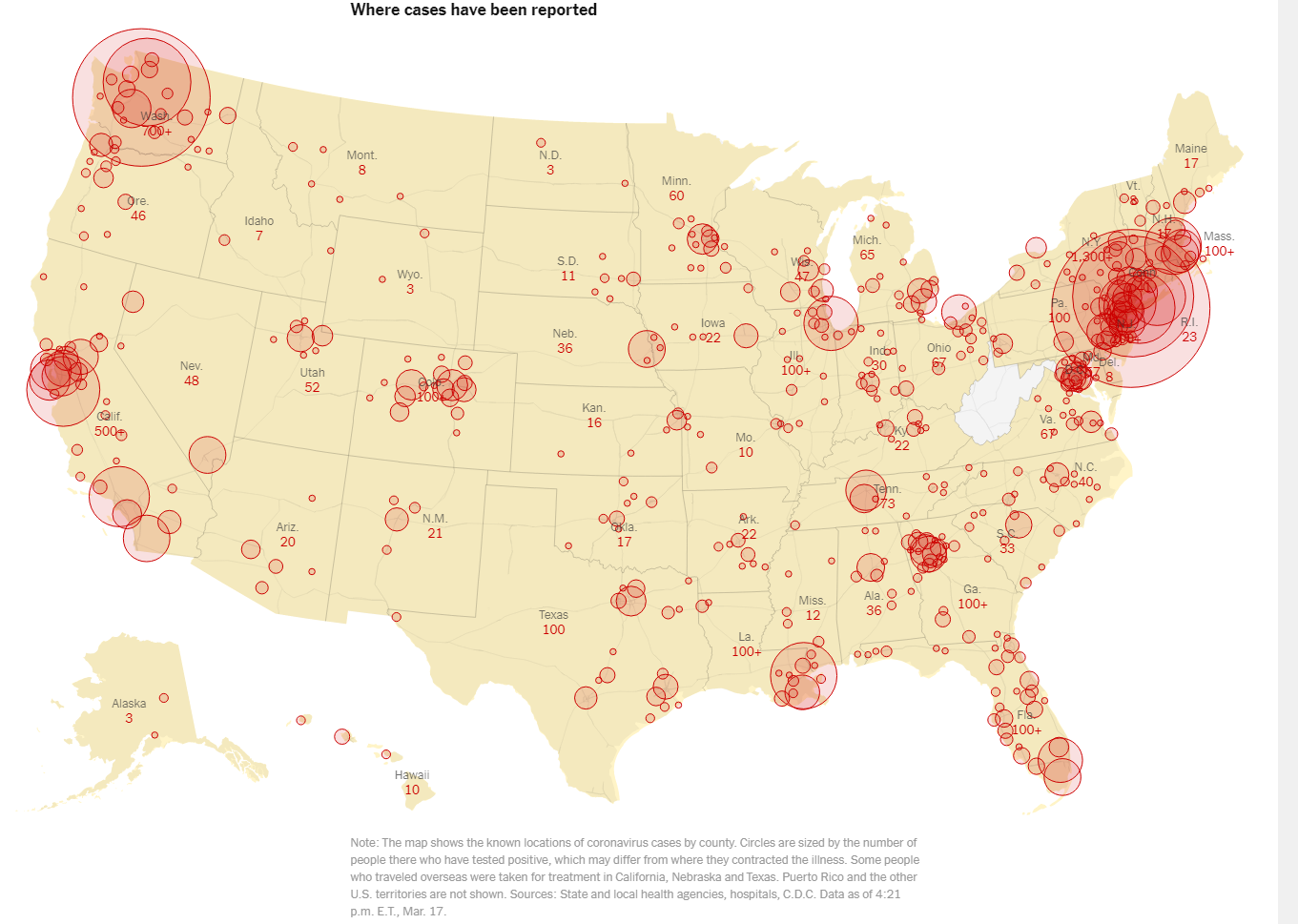 New York became one of the most affected area by coronavirus. (Photo: New York Times)

According to CNN, the number of Americans who have died from the novel coronavirus in the US has reached 100.

In the absence of federal aid, states and local authorities have to decide on rules. In Ohio and Massachusetts, restaurants and bars are closed, in Florida beaches have been closed and at least 32 states have closed schools.

The Guardian commented that emergency measures brought in across America to combat coronavirus differ from state to state – but for weeks they have had one thing in common: nobody was acting on guidelines issued by the federal government, because there weren’t any.

At a news conference Tuesday, New York Governor Andrew Cuomo announced that the virus had spread to at least 1,374 people in the state, hospitalizing 19 percent of them and killing at least 12.

Cuomo asked US President Donald Trump to help New York after their war of words. “It is essential that the federal government works with this state,” Cuomo said at the press conference in Albany. “We cannot do this on our own.”

The remarks offered a stark change in tone from just a day earlier, when the governor said the Trump administration has been “behind from day one of this crisis.”

Recently Cuomo fiercely criticized Trump’s leadership in the fight against the virus. “You see a whole hodgepodge of efforts being taken across the country,” said Cuomo, who announced a tri-state agreement on Monday with neighboring New Jersey and Connecticut to close all gyms, movie theaters and casinos.

Cuomo warned that intensive care units would soon be full and asked President Trump to send the Army Corps of Engineers to retrofit university dorms and other buildings to house those patients.

New York Mayor Bill De Blasio said he will limit all bars, restaurants and cafes to takeout or delivery services in New York City. De Blasio said the city's 8.4 million residents should prepare for a shelter in place order. The "very, very difficult decision" should be made in the next 48 hours.

"You have to think of this as something where you're going to see a massive mobilization to save lives, to help people through their suffering with this disease," the mayor said Monday.

US Public health officials said that the US has reached a tipping point, warning that if residents don't take the call to action seriously, the country may approach the situation in Italy, which went on total lockdown last week and where hospitals have been overwhelmed with more than 24,000 cases.

The federal administration on Tuesday launched a series of initiatives to further address the crisis. US Treasury Secretary Steven Mnuchin said that the Trump administration wants to send checks to Americans in the next two weeks in order to address the economic impact of the coronavirus outbreak.

But American media considers that the US federal government did not issue guidelines for the closure of businesses or restrictions on travel or large gatherings until Monday afternoon, leaving it up to America’s patchwork of state and local authorities to decide what rules are best.

Trump told state governors in a conference call on Monday that they should pursue the acquisition of key medical equipment themselves instead of waiting for Washington to act.

An NPR/PBS NewsHour/Marist poll released Tuesday shows that only 37 percent of those polled have either “a good amount” or “a great deal” of trust in the information they hear from the president about the coronavirus, while 60 percent say they do “not very much” or “not at all” trust Trump’s words on the subject.

According to CNN, the number of Americans who have died from the novel coronavirus in the US has reached 100. “The grim milestone comes as health officials tout a consistent message: Limit your interactions now or overwhelm the health systems meant to take care of you. And get used to it, this won't be over soon.” 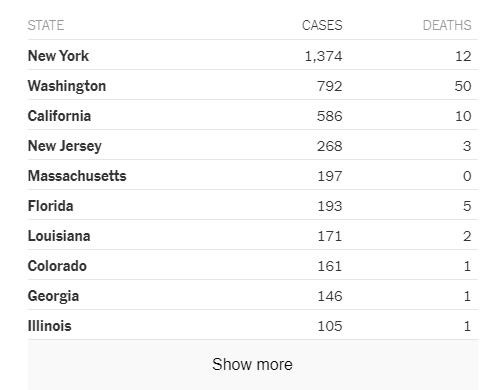 In this situation, state governors have made rules on the fly. The Democratic governor of Illinois shut down all bars and restaurants in the state until next month. Pennsylvania announced similar restrictions, but only for certain counties. In Ohio, the Republican governor, Mike DeWine, announced statewide closures.

“We’re two days from St Patrick’s Day, when people get together and crowd into bars,” DeWine said. “We are at a crucial, crucial stage.”

Without federal guidance, local officials have in some cases issued conflicting orders. In Pennsylvania, the governor at the weekend advised people to stay home, and the commissioner of Montgomery county, which includes Philadelphia suburbs, told people to cancel gatherings.

Miami says that, by Wednesday, it will close all entertainment businesses, such as theaters, as well as fitness centers. Dine-in restaurants may sell food for takeout or delivery.