OPINIONS US still trying to shift blame by threatening WHO, China

US still trying to shift blame by threatening WHO, China 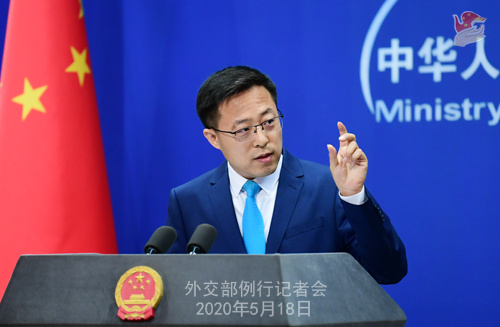 Washington's attempt to smear Beijing's efforts to fight COVID-19 so as to shift the blame for its own mishandling of the pandemic is futile, Foreign Ministry spokesman Zhao Lijian said on Tuesday.

He made the remark after United States President Donald Trump threatened in an open letter on Monday to permanently pull funding from the World Health Organization, saying the organization had shown an "alarming lack of independence" from China.

"The open letter is filled with expressions of implications, maybes and possibilities that try to mislead the public through such a specious method," Zhao said at a regular news conference in Beijing.

Zhao said Washington's arbitrary suspension and reduction of funding for the international organization is a unilateral act in violation of its international obligations, and he urged individual US politicians to stop shifting blame and strengthen cooperation with the international community to save lives.

"It is a legally binding obligation for the US as a member of the WHO, which cannot be bargained with," he said, adding that Washington miscalculated by trying to make China an issue to avoid its responsibility.

He also reiterated China's opposition to the so-called independent international review of COVID-19 that Australia has pushed for.

China has agreed in a draft resolution jointly submitted to the World Health Assembly to support a review of experience gained and lessons learned from the WHO-coordinated international health response to the pandemic after it is under control, Zhao said. The resolution is totally different from the "independent review", he said.

The resolution was adopted at the 73rd session of the World Health Assembly on Tuesday.

Zhao added that China would welcome Australia abandoning political manipulation in accordance with resolutions of the World Health Assembly and returning to the general consensus of the international community.