OPINIONS US stumbles as Afghan situation cycled in 20 years

US stumbles as Afghan situation cycled in 20 years 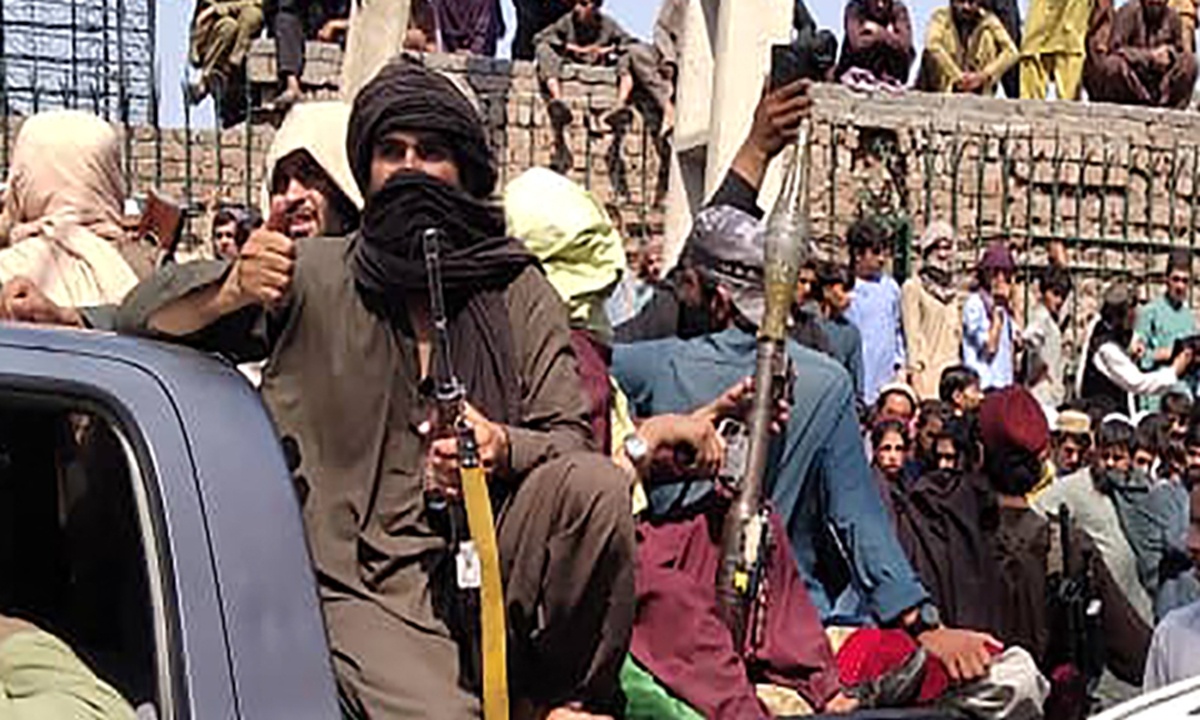 Taliban fighters sit on a vehicle along the street in Jalalabad province on Sunday. (Photo: AFP)

Afghan Interior Minister Abdul Sattar Mirzakwal announced Sunday that Kabul will shift power peacefully to a "transitional administration." Afghan President Ashraf Ghani had left the country, according to the Associated Press. On the same day, a Taliban spokesperson confirmed they had entered Kabul. It seems that the situation in Afghanistan will enter a new chapter.

The US has spent 20 years on its "anti-terror war" in Afghanistan, investing huge amount of resources in the country to support the Afghan government and help train its troops. However, just a month or so after the quickened withdrawal of US troops, Afghanistan's military collapsed completely under the Taliban's fierce attacks. This was unthinkable for the US and the rest of the West - even beyond their most pessimistic predictions.

The drastic change in Afghanistan's situation is undoubtedly a heavy blow to the US. It declared the complete failure of US intent to reshape Afghanistan. In the meantime, the US' desperate withdrawal plan shows the unreliability of US commitments to its allies: When its interests require it to abandon allies, Washington will not hesitate to find every excuse to do so.

A country as powerful as the US could not defeat the Afghan Taliban, which received almost no aid from outside, even in 20 years. This defeat of the US is a clearer demonstration of US impotence than the Vietnam War - the US is indeed like a "paper tiger." From another perspective, the US' defeat is even more humiliating than that of the Soviet Union in Afghanistan in the 1980s.

The Najibullah government in Kabul held out for more than three years after the Soviet Union withdrew from Afghanistan, where the anti-government guerrillas were heavily armed and supported by the US. However, the Taliban defeated the US on its own. The Afghan government collapsed even before the US had completed its troop withdrawal.

Such a change in Afghanistan will influence the regional geopolitical scene, bringing about quite some uncertainties. The Western media have been busy mentioning China when reporting Afghanistan. They even hype that the situation in Afghanistan has taken China to an "awkward reality." But such a narrative is nothing but a logically confused attempt to appease their own feelings.

The media in the US and the West used to deny the existence of the terrorist group East Turkestan Islamic Movement (ETIM), portraying them as an excuse of China to engage in "oppressive moves" in its Xinjiang Uygur Autonomous Region. Now they have started to hype that the Taliban will support ETIM after it gains power and thus impose a threat to the security of Xinjiang. In their narrative, China in particular has reasons to be concerned about the situation in Afghanistan.

As a matter of fact, China will indeed view the situation in Afghanistan taking into consideration the stability of its Xinjiang region. But the Western media's narrative is unquestionably more than exaggerated. China's People's Liberation Army is heavily deployed around the Wakhan Corridor, a key zone for China's counter-terrorism mission that links China and Afghanistan. Secessionists, extremists and terrorist groups cannot even enter China from that corridor. Besides, after years of arduous governance, Xinjiang has uprooted extremism, making it harder for foreign forces to infiltrate the region.

In reality, the main source of terrorist activities that were rampant in Xinjiang a few years ago was the US and the West. The US and the West defended terrorists in Xinjiang in the name of "human rights," beautified their terror acts as "resistance against the Chinese regime," and instigated the "Three Evils" within Xinjiang ideologically. The West even turned a blind eye when international terror forces targeted China. The West's double standards are the biggest challenge to China's counter-terrorism efforts.

Therefore, China will rationally face the changing situation in Afghanistan - it will prevent the situation there from having a negative impact on Xinjiang and at the same time evaluate the situation objectively. China will never jump into the trap Western opinion set up especially for China. The US' anti-terror war has failed. It is the US and the West that should bear the biggest challenge of the changing situation in Afghanistan.

China is in a relatively favorable position. China has no will to fill the vacuum the US has left behind in Afghanistan. The principle of not interfering in the internal affairs of other countries is always guiding China's foreign policy. China will play a constructive role in helping Afghanistan achieve peace and engage in reconstruction. China's strategic kindness and policy stability will ensure that China always holds the initiative in the Afghan situation.