OPINIONS US-targeted IS in Somalia could be a ‘significant threat’

US-targeted IS in Somalia could be a ‘significant threat’ 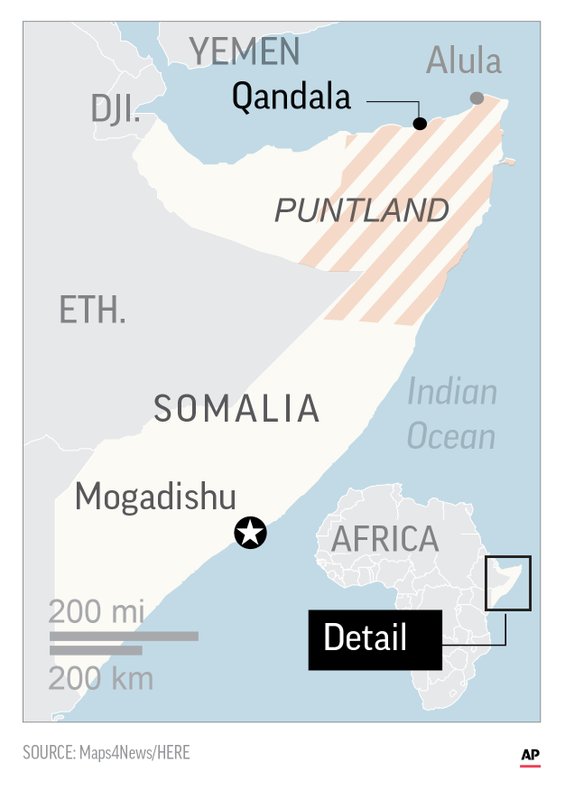 The Islamic State group’s growing presence in Somalia could become a “significant threat” if it attracts fighters fleeing collapsing strongholds in Syria and Iraq, experts say, and already it seems to be influencing local al-Shabab extremists to adopt tactics like beheadings.

The U.S. military this month carried out its first drone strikes against IS fighters in Somalia, raising questions about the strength of the group that emerged just two years ago. A second strike targeted the fighters on Sunday, with the U.S. saying “some terrorists” were killed.

The Islamic State group burst into public view in Somalia late last year as dozens of armed men seized the port town of Qandala in the northern Puntland region, calling it the seat of the “Islamic Caliphate in Somalia.” They beheaded a number of civilians, causing more than 20,000 residents to flee, and held the town for weeks until they were forced out by Somali troops, backed by U.S. military advisers.

Since then, IS fighters have stormed a hotel popular with government officials in Puntland’s commercial hub of Bossaso and claimed their first suicide attack at a Bossaso security checkpoint.

This long-fractured Horn of Africa nation with its weak central government already struggles to combat al-Shabab, an ally of al-Qaida, which is blamed for last month’s truck bombing in the capital, Mogadishu, that killed more than 350 in the country’s deadliest attack.

The Trump administration early this year approved expanded military operations in Somalia as it puts counterterrorism at the top of its Africa agenda. The U.S. military on Sunday told The Associated Press it had carried out 26 airstrikes this year against al-Shabab and now the Islamic State group.

For more than a decade, al-Shabab has sought a Somalia ruled by Islamic Shariah law. Two years ago, some of its fighters began to split away to join the Islamic State group. Some small pro-IS cells have been reported in al-Shabab’s southern Somalia stronghold, but the most prominent one and the target of U.S. airstrikes is in the north in Puntland, a hotbed of arms smuggling and a short sail from Yemen.

The IS fighters in Puntland are now thought to number around 200, according to a U.N. report released this month by experts monitoring sanctions on Somalia. The experts traveled to the region and interviewed several imprisoned IS extremists.

The U.N. experts documented at least one shipment of small arms, including machine guns, delivered to the Islamic State fighters from Yemen. “The majority of arms supplied to the ISIL faction originate in Yemen,” IS defectors told them.

A phone number previously used by the IS group’s U.S.-sanctioned leader, Abdulqadir Mumin, showed “repeated contact” with a phone number selector used by a Yemen-based man who reportedly serves as an intermediary with senior IS group leaders in Iraq and Syria, the experts’ report says.

While the Islamic State group in Somalia has a small number of foreign fighters, the Puntland government’s weak control over the rural Bari region where the IS group is based “renders it a potential haven” for foreign IS fighters, the report says.

The IS group’s growing presence brought an angry response from al-Shabab, which has several thousand fighters and holds vast rural areas in southern and central Somalia, in some cases within a few dozen miles of Mogadishu.

Al-Shabab arrested dozens of members accused of sympathizing with the Islamic State faction and reportedly executed several, according to an upcoming article for the Combating Terrorism Center at West Point by the center’s Jason Warner and Caleb Weiss with the Long War Journal.

Civilians in areas under al-Shabab control have suffered. “Possibly in response to the growing prominence of ISIL, al-Shabab imposed more violent punishments, including amputations, beheading and stoning, on those found guilty of spying, desertion or breaches of sharia law,” the new U.N. report says.

Some Somali officials say al-Shabab has begun to de-escalate its hostility against the IS fighters as its initial concerns about rapid growth have eased. Al-Shabab has begun to see IS in Somalia as a supplementary power that could help its fight against Puntland authorities, said Mohamed Ahmed, a senior counterterrorism official there.

Officials also believe that the Islamic State group has difficulty finding the money to expand. Its fighters are paid from nothing to $50 a month, the U.N. report says.

“For them, getting arms is a lot easier than funds because of the tight anti-terrorism finance regulations,” said Yusuf Mohamud, a Somali security expert.

For now, no one but al-Shabab has the ability to carry out the kind of massive bombing that rocked Mogadishu last month. For the Puntland-based IS fighters to even reach the capital, they would have to pass numerous checkpoints manned by Somali security forces or al-Shabab itself.

That said, two Islamic State fighters who defected from al-Shabab and were later captured told the U.N. experts they had received airline tickets from Mogadishu to Puntland’s Galkayo as part of the IS group’s “increasingly sophisticated recruitment methods,” the U.N. report says.

Scenarios that could lead to IS fighters gaining power include the weakening of al-Shabab by the new wave of U.S. drone strikes, a new offensive by the 22,000-strong African Union force in Somalia or al-Shabab infighting, says the upcoming article by Warner and Weiss.

On the other hand, “it is a strong possibility that given the small size of the cells and waning fortunes of Islamic State globally, the cells might collapse entirely if their leadership is decapitated.”

That’s exactly what the U.S. military’s first airstrikes against the Islamic State fighters this month were aiming to do, Somali officials told the AP. The U.S. says it is still assessing the results.